As Luckett would have it 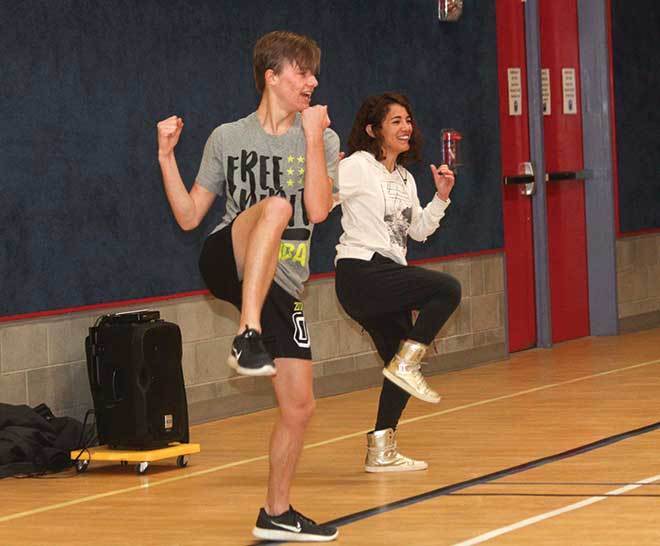 It has a 15-million person following in 180 countries. And in many ways thanks to William Luckett, a junior at Roaring Fork High School, Carbondale is quickly adding to the Zumba fever.

The 17-year-old is no stranger to movement — he studies ballet, tap, jazz and contemporary dance — so when he fell in love with Zumba, it wasn’t surprising. He realized he wanted more than just participate: he wanted to teach.

“I’ve never had more fun in my entire life. I felt so energetic after, and I was like, I have to know more,” Luckett said. “And I went online and found out I can become a teacher.” A full-day certification course was offered in Denver last August, which he completed successfully. Now, he spends his Sunday mornings teaching the 10 a.m. class at the Recreation Center with his mentor, Andrea Orrego and Wednesday afternoons leading the afterschool Zumba club at Roaring Fork High.

“I teach one half and [Orrego] teaches the other half of the class, and it’s so fun,,” Luckett said of the Rec Center Zumba. “I’m learning how to really be in a group of people, and it’s a great workout for me as well.”

While the Zumba club schedule can be a little tricker — sometimes about a dozen students show up for the class, and other times nobody is able to make it — Luckett has definitely spearheaded a culture of Zumba appreciation at the school. Spanish classes sometimes take Zumba breaks. Once, Luckett was invited to teach a Zumba class to a staff meeting. “I got to do zumba with 80 teachers,” he said, beaming.

It’s an enthusiasm he hopes to be able to continue sharing, both throughout the remainder of his career at the high school and later in college, wherever that may take him (probably New York, he said).

“I think it’s really important to have that hobby — or job — on the side. It’s super easy. I set up my own classes. It’s my own schedule,” he said of the flexibility teaching Zumba allows him. Additionally, it keeps him energized for his other pursuits, which include theater year round,  running cross country in the fall and skiing in the winter.

“Because of Zumba, I’m in the best of shape of my life right now,” Luckett said. “It helps me maintain and build so much core strength,.” adding that one doesn’t need a teacher’s rigorous schedule in order to see similar benefits. “Zumba is what you need — it doesn’t feel like you’re working out. It just feels like you’re having fun and you’re dancing and then in the end you’re sweating and then hours later, you feel it. It doesn’t put any big impact on your body, and you’re still gaining muscle. It’s so worth it and such an amazing experience,” he said, his passion evident.

Currently, Luckett is a standard Zumba teacher, but as he grows his pursuits, he can cross-certify into specific subcategories. Zumba Gold, for instance, is a gentler, slightly toned-down version that caters specifically to an older demographic. On the opposite of that extreme, there is Zumbini, a rhythm and movement class for babies (with parents!) and children up to 4 years old. Zumba Strong incorporates weights into the routines.

“There’s so much to it,” Luckett said. “I just know the basics; I know 2 percent of what Zumba offers. And now they have the cruises, they have conventions, they have their own clothing line. It’s grown from a Colombian man dancing in his living room to having cruise ships.”  You don’t have to don Zumba-brand attire in order to enjoy a class.

Price: $7 drop in or punch pass