Into a bit of a pickle(ball) 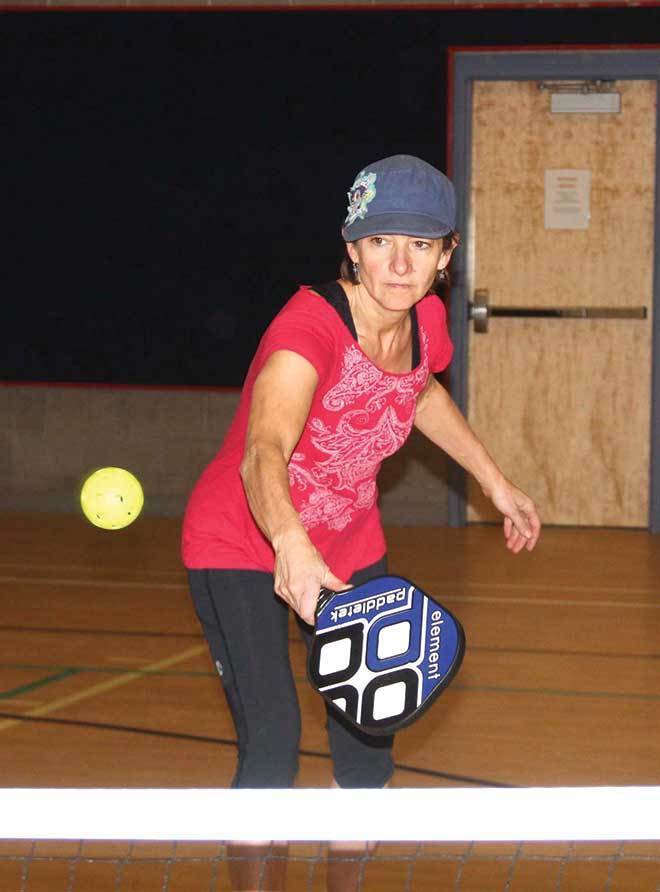 I’d been wanting to try my hand (or foot?) at pickleball since I first heard mention of the sport a few years ago.  I had no idea how it was played, but with a name like “pickleball,” I assumed it would emphasize fun over finesse, trial and error over technique, recreation over rules, and community over competition. In short — as anyone who has ever attempted to play soccer or tennis with me would attest — my kind of sport.

I began learning about pickleball, as we do most things these days, by Googling it. Apparently, it’s often played on tennis courts (using modified boundary lines), which means it can be played indoors or outdoors. Each person uses a large, wooden paddle to hit the ball (which is similar to a wiffle ball) over the net. It can be played with two, three or four players, although the Carbondale Rec. Center typically sets up drop-in games of doubles.

I also learned that pickleball was invented in the mid-1960s as a children’s backyard game, and is now quickly growing in popularity among players of all ages. Case in point: Carbondale Middle School added it to their P.E. curriculum a few years ago.

My foray into actually playing pickleball a couple weeks ago began as I expected: everyone in the gym was warm and welcoming, eager to teach me how to play, and happy to be my partner. But their friendly veneer was deceptive; they take their sport very seriously!

After a short, practice volley and an explanation of how the game works, we jumped right in. My brain was completely taxed with trying to remember all the rules and the scoring process, not to mention the fundamental principle of keeping my eye on the ball. My opponents sent the ball sailing swiftly out of my reach when I stood too far to one side of the court, then slammed it at my feet when I stood too far back. As happy as everyone there seemed to be to have a pickleball newbie join them that Saturday morning, they were equally happy to outwit me, take advantage of my un-strategic moves, and score points against me and my partner.

But one thing I predicted about trying my hand at pickleball was right on: it was very fun! Although the competition was serious, it was brief. When I made a bad move and an opponent scored against me, they would then patiently provide me with some helpful hints about how to not leave myself so vulnerable the next time. Each game was short, lasting only to 11 points. The four players then clicked their paddles with a round of “Good game,” partners were switched, and everyone cheered on and complemented other players (or just chatted) until another court became available.

Maybe it’s because I was playing with Carbondalians, but the sense of competition among the players never trumped their sense of civility or courteousness. No one laughed at me when I inadvertently screamed as a back-spinning ball whizzed past me. No one mentioned that I looked more like I was attempting ballet than a paddle sport (which I didn’t realize until I saw Jane’s photos). No one seemed to mind having to repeat the same rules to me over and over since they didn’t seem to be sticking in my brain. And no one hesitated to be my partner.

If you’ve ever considered taking up pickleball, I’d highly recommend it. It’s equal parts fun and furious, recreational and riveting. There’s opportunity to develop advanced techniques and strategies, but you can also jump right in without any previous experience. You’ll find the support you need to get started and camaraderie with a lively group of kind (yet competitive!) community members.

Cost: A day pass, membership, or punch pass is required for participation.