Ram hoopsters bouncing back from break 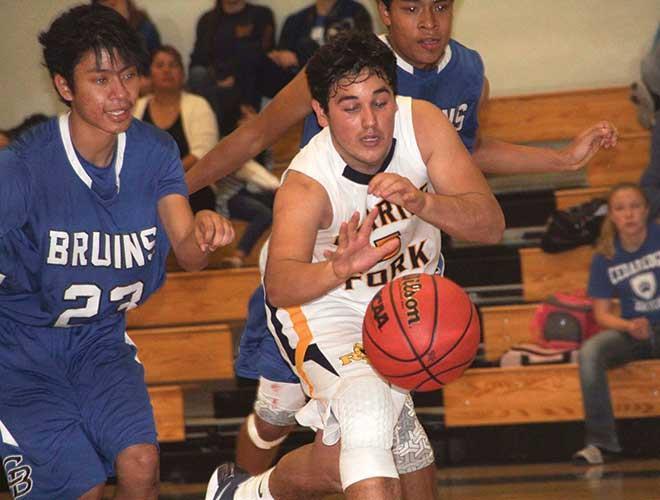 Roaring Fork High School’s basketball teams are off to a promising start as they jump right from the holidays into league play.

“You get rolling and you get right where you want to be and then you’ve got winter break,” noted Athletic Director and Girls’ Coach Jade Bath.

The varsity girls are 4-2 overall following an array of mostly non-league games in December. They defeated Steamboat and fell to Rifle in their own Brenda Patch Tournament, then came out of the Weld Central Tournament with victories over Stargate and Prospect Ridge and a loss to Weld itself. In the sole league game of the early season, they wholloped Aspen 44-18. Their next challenge is Delta, which boasts a 4-1 record but no league play at home, in an away game on Jan. 5.

“I think that will be a good test for us,” Bath said. “We have to just show up and play Roaring Fork basketball… What’s fun about our team is that we don’t really rely on one girl. Whoever’s hot that night is going to be our leader.”

The boys, meanwhile, boast five straight wins after their opening loss to Steamboat in the Brenda Patch. With no league play thus far, their match with 5-0 Delta will tell them a lot.

“It’s a little bit of the unknown,” Coach Larry Williams said. “They’re a tough team. We struggled against them this summer at camp.”

After that, both teams will tackle Basalt at home on Jan. 9. It’s a deep rivalry, particularly for the boys, who haven’t had a win against the Longhorns in several years. With a fair amount of turnover on the upvalley side, however, the odds may be in the Rams’ favor.

“It comes down to the fundamentals of taking care of the ball, rebounding and playing defense,” Williams said.

That will be true throughout the season, which runs through mid February.

“You have to play well against everybody every night, especially in this league,” Williams said. “But that just makes it fun.”

Having the support of their community wouldn’t hurt, either.

“It would be great to see people show up and pack the gym,” he said.