Rolling into 2018 via aikido 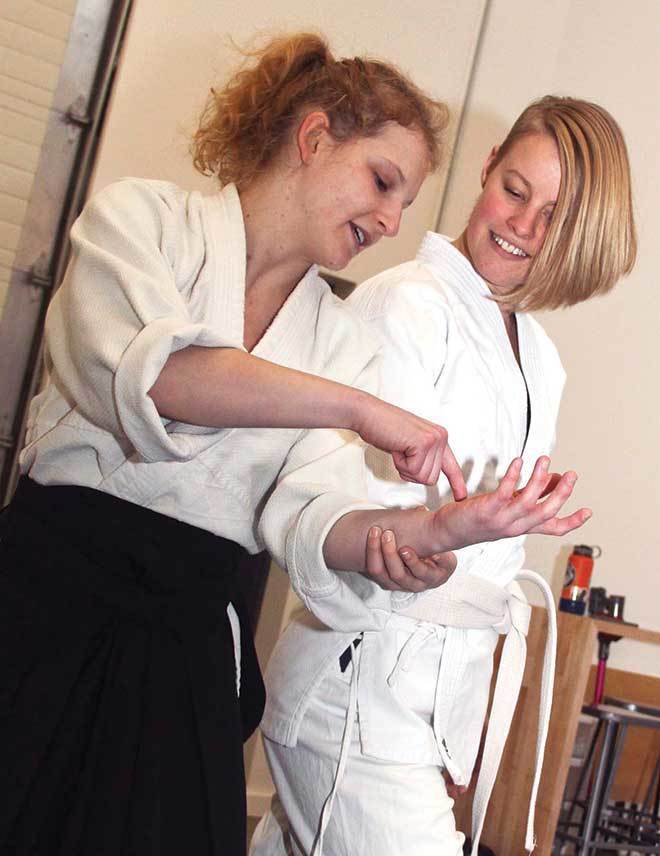 Mike Jones, chief instructor at Roaring Fork Aikikai, first got into aikido exactly because it’s a martial art that requires more art than actual combat. That’s not to say it doesn’t pack a punch; at the end of our 90-minute class, he showed me a quick, seemingly effortless move that had me on my knees in an instant.

“One of the reasons I got into aikido [is] there’s no yelling. I don’t have to break any boards. You don’t have to fight someone to get to the next level,” Jones said of the practice. Indeed, he attributes his aikido background to the lack of confrontation in his life. “Aikido is not about hurting somebody,” he emphasized. “It’s about learning how to control a situation, which ultimately I think is a much more difficult process. I’ve never needed it to [hurt somebody].”

I was not in the dojo that evening to hurt somebody. I was there to try something new. It’s a new year, after all, and I’ve always been peripherally interested in aikido. I remembered that a studio had opened in Carbondale last June, but I had never actually made it to a class.

When I first rushed in, six minutes late, Jones was already leading some centering stretches. This was clearly a solemn place. I recognized some of the chi — or ki, in Japanese — cultivation exercises, and I know I flushed with embarrassment for intruding.

That was the only moment I felt intrusive, and it was fleeting. Jones welcomed me warmly and fetched me a gi, the appropriate garb for aikido. It resembled a robe I’d wear to a hot tub, so I was already feeling better. This was hospitality.

And then we really started. I was the only beginner, so Jones partnered me with his teaching assistant of the evening, Marina Yerovinkina. Her decade with aikido served her well that evening, because her kind patience with me proved eternal.

I’m an awkward student because I’ve always been quick to laugh. Even in more serious, sacred spaces, my every mindful endeavor has included laughter, be that in dance, shiatsu (a Japanese style of bodywork) or yoga. I was very relieved when Jones didn’t seem offended at my propensity to laugh at myself — and I felt so cumbersome and clunky for most of the class that laughter was required.

But I also felt inspired. Watching Jones demonstrate different movement sequences with Yerovinkina was nothing short of mesmerizing. The fluidity of the transitions was contagious, and I felt like a puppy, tail wagging, waiting for my turn to try.

My turn meant repeating awkward pivots and ungraceful, glorified somersaults until I was at least facing my intended direction after a move.

“It’s aikido by numbers,” Yerovinkina would say with a smile throughout our session together. I understood: if you do something over and over enough times, eventually one of those times will be right. Ish. Right-ish. And eventually my body did start to listen to me, sort of, and I’d occasionally even roll across the mat almost as silently as she did 100-percent of the time. Yerovinkina would introduce an interaction in four or five steps that eventually consolidated into two or three, and that felt like progress.

In spite of all of my self consciousness and self deprecation, I was having a blast. And, as my body would inform me the next day, I was also getting way more of a workout than I realized in the moment. I’m definitely doing this again, I thought at the end of the class.

I was in for another surprise at the end of class. When I asked if I could pay for the time, Jones answered firmly, “Not a chance.” It turns out it wasn’t journalistic privilege: he opens the dojo to a free class for everyone who is interested. You can even book it online in advance, which the dojo encourages (rfaikikai.com/try).

“I’m not a fan of having people pay to do something that they’re not even sure they’re interested in,” Jones said. “[Aikido’s] a slower martial art and a steep learning curve, so come in and watch a class if you think the structure and movement is something you want to try.”

That passion for making aikido accessible is why Jones and his co-founder, Chris Bergerud, set the business up as a nonprofit. In addition to offering the community a fully dedicated, United States Aikido Federation (USAF)-recognized dojo in the Valley, the pair aspire to partner with existing groups that work with underprivileged youth to provide the structure and discipline that comes with the practice.

“We’ve been getting donations from the community and creating scholarships,” Jones said of the organization’s future. And in the meantime, there’s no time like the present to pick up a new pastime.