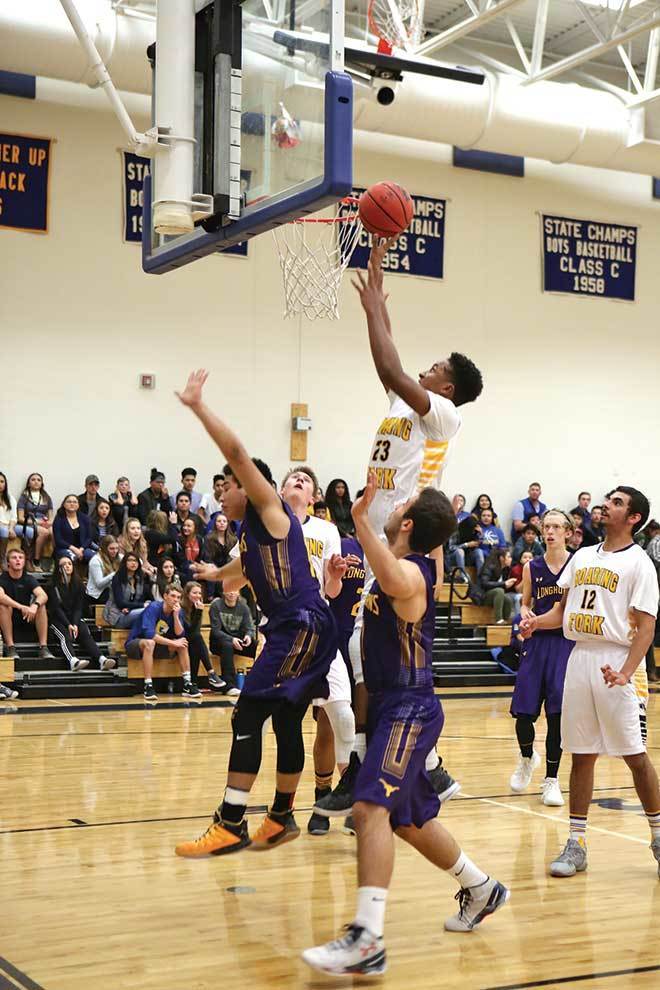 By Justin Patrick
Special to The Sopris Sun

Both the girls’ and boys’ Roaring Fork High School varsity basketball teams claimed big wins over upvalley rival Basalt Longhorns Tuesday evening. The Rams were on point during their home games, quickly squashing right out of the gate any hope of a close contest.

The RFHS girls team lead Basalt 31 to 12 at half time, establishing a daunting lead that left the Longhorns deep in the hole. The Rams’ gameplay was firing on all cylinders, and the ladies delivered smart, cooperative plays time and again. Their passing game was smooth and fierce. The Longhorns answered with a firm defensive pushback, but it proved too little too late against the Rams’ consistently aggressive offense. Junior Logan Erickson spared hardly a moment to catch her breath, tenaciously working through any and all resistance to move the ball up the court and within striking distance, scoring 15 points herself. Sophomores Emily Broadhurst and Caroline Wisroth likewise exhibited magnificently aggressive play, helping their team secure a 57 to 35 win over the Longhorns. Roaring Fork is now 5-3 while the Basalt girls are 2-7 for the season.

The boys followed the girls’ precedent with a steamrolling victory of their own. By the end of the first quarter RFHS was leading 30 to 9, setting a tone that did not waver. Senior Justin Thompson was a pivotal part of the Rams’ offensive strategy, bagging 26 points overall. His epic dunk in the second quarter was met with roars from the crowd. Junior Mikel Mayo offered consistent support, instigating numerous successful plays. Senior Irving Anchondo sunk several 3 pointers. And junior Joe Salinas was on fire as well, delivering 16 points and wreaking havoc on the court.

The Rams’ defense was tight and unforgiving. Basalt only squeezed in four points in the second quarter. By half time, the Rams were leading by a serious 50 to 13, setting the stage for a brutal uphill climb if the Longhorns could hope to get back in the game. The Longhorns’ Wylie Hawkins was all heart, even enduring a bloodied forehead before jumping back in during the final minutes. Sophomore Jackson Rapaport and senior Justin Henderson were relentless. However, the Longhorns could simply not deliver and their offense consistently crumbled. The Rams were taking no prisoners and finished the game on top, 78 to 32, ending a several-years losing streak to their longtime rival and laying down the gauntlet for a rematch next year. Roaring Fork is now 7-1 for the season, with Basalt at 1-7.

“The guys came to play on both ends of the ball, defensively and offensively,” said Rams coach Larry Williams. “They rebounded really well in the first half which got the fast break going… The score was surprising. We stress team play, and they shared the ball well.”