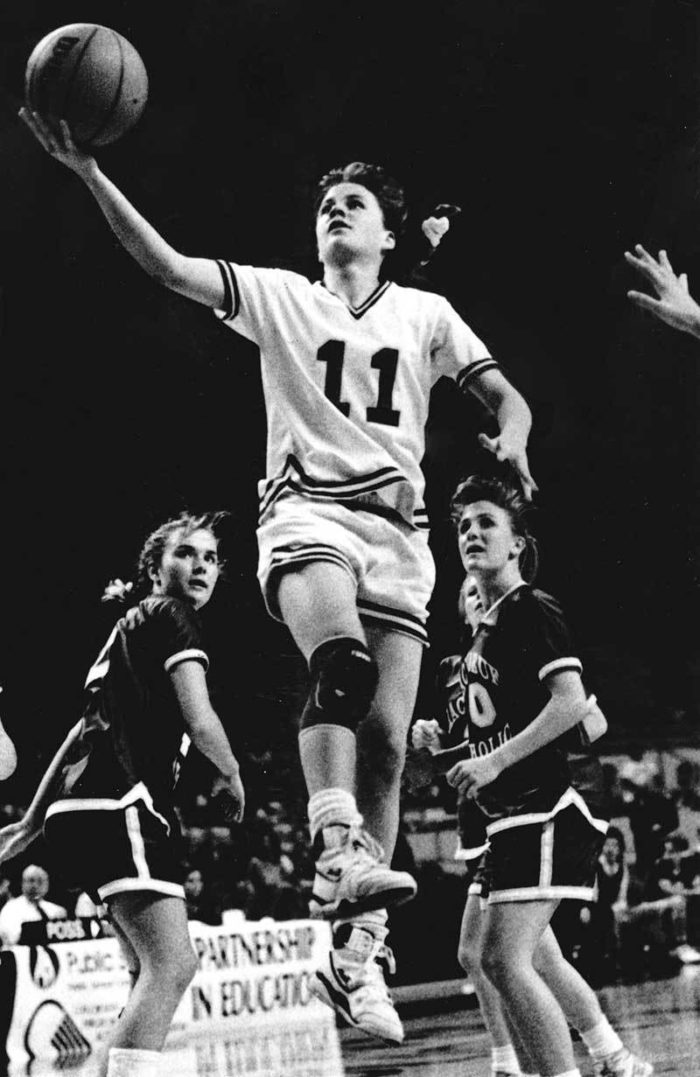 This week, the Colorado High School Activities Association reiterated what many Carbondalians have known since 1989 — that Tricia Bader Binford was one of the finest athletes the state has ever seen.

“She was definitely a special player,” said Larry Williams, who was an assistant coach when Binford played for the Roaring Fork Rams. “Her basketball IQ was well above average, for a freshman especially and her speed made her an incredible defensive player and helped her offensive game.”

Binford is currently the head coach at Montana State following a professional career, but her Jan. 24 induction into the CHSAA Hall of Fame stems from her time as a five-time state track champion and three-time all-state basketball player.

Her story is inextricably linked with the “threepeat” — back to back to back state titles for the Roaring Fork girls’ basketball program in 1989, ‘90 and ‘91.

“To win two in a row, let alone three in a row is pretty unusual,” Williams noted.

Not that Binford made it happen on her own.

“She stood out, but she had a great supporting cast that made her a better player,” Williams said. “Those championships were definitely a team accomplishment.”

Indeed, Karen (Nieslanik) Crownhart and Jodi (Dundas) Smith, who played in all three state championships with her, planned to attend the induction.

It’s that element of cooperation that helped basketball rise above the rest for the multitalented Bader.

“It hooked me from the start,” she said, which took the form of quietly shooting hoops in the driveway.

When she reached high school, it was the other girls who inspired her to stick with it.

“Sports were where my passion was, but I was kind of at that crossroads where I couldn’t do everything,” she said. “I basically chose basketball because of the camaraderie.”

In addition to the team, she credited the town at large and her family in particular with providing the support to succeed — a sentiment many of her fellow inductees share.

“The common thread that came through for all of us was gratitude to our communities,” she said. “I think parents cannot be undervalued in terms of the confidence they instill in their children and my brother and sister always believed in me.”

The team drew huge crowds both at home and on the road and packed the old McNichols Arena during playoff games. They didn’t think about it at the time, but it was a turning point in women’s athletics.

“We grew up in a time where girls’ sports were around, but a few years earlier that didn’t exist,” Binford said. “The chemistry that we had of playing to everybody’s strength was very unique, but we didn’t know anything different.”

That dynamic, she said, was due at least in part to hard work and a strong legacy already in place.

“Once that winning culture was established, we knew what it looked like,” she said. “It was in the way we practiced and the way we prepared.”

It’s a lesson she tries to instill in the girls at Montana State.

“Treat every day as your best opportunity — spend the time on the things that truly matter and you want to be great at,” she said.

And while she didn’t didn’t set out to go pro or coach, she’s happy with the direction life has taken her.

“I just loved playing basketball and it continued to provide me opportunities,” she said of her years playing in Australia and then in the WNBA after graduating from Boise State with a criminal justice degree. “There’s just something about the game where you can never perfect it, and that’s an incredible challenge. There’s so many aspects to it.”

Her coaching career — which earned her the title of Big Sky Conference Coach of the Year in 2015-16 — has been even more gratifying,

“Making an assist was my favorite part of the game. I think moving into a coaching role is very similar. To see people have success on and off the court is really fun and special,” she said.