Wax, from a shed in Carbondale to gear everywhere 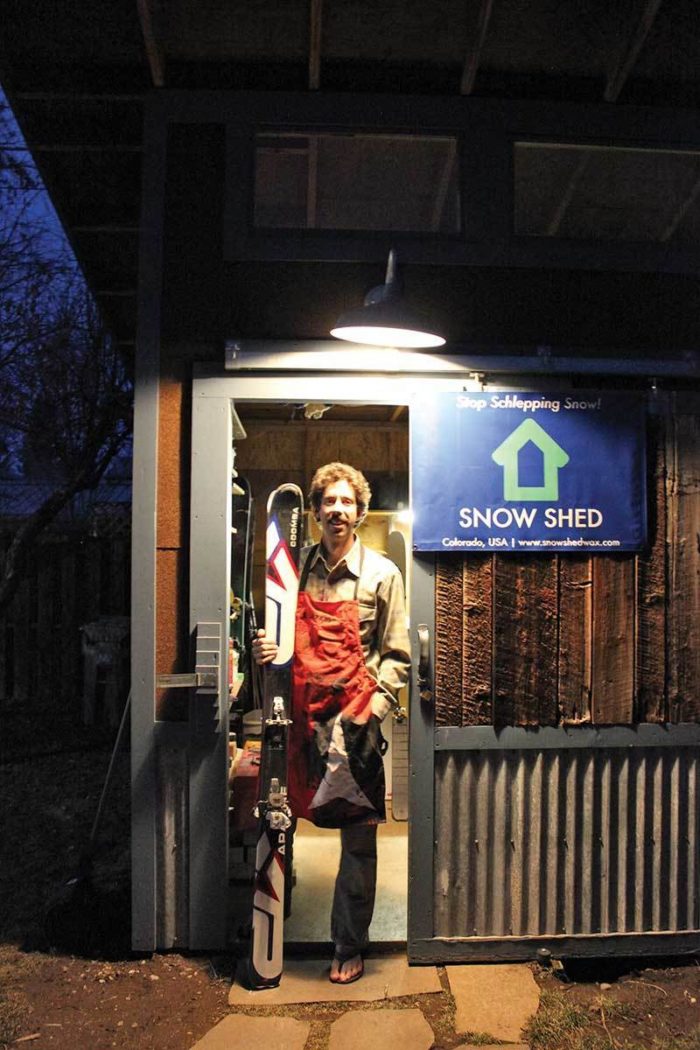 Praise be! There’s finally snow! Wet, heavy snow. And while this reporter is all about earning turns, there’s a way to work smarter — not harder — while on the hill, thanks largely in part to Carbondale local Peter Arlein and friends.

Arlein is the founder and CEO of Snow Shed Wax. The company, which makes a topsheet spray for skis and snowboards, distributes to retail stores in the United States and Canada and online behemoths like Backcountry.com. At press time, Arlein and Snow Shed representatives are in Denver at the Outdoor Retailer Snow Show. It’s also a company run out of a backyard shed.

“We’re based out of my house. That’s where the company is based out of, right here in Carbondale,” Arlein said. “We work with a bottling plant in Western Colorado, and they make the product for us. We get all the raw materials sent there. They bottle it and label it, and then we just take it out,” he said, noting that one of the goals of heading to Denver for the trade show is to increase distribution sites and increase sales staff.

Every skier and snowboarder knows to wax the bottom of his or her gear — Arlein’s product is a water-based, biodegradable pump spray (an aerosol would sort of counter the environmentally friendly ethos) for the tops of skis and snowboards. The anti-stick spray creates a waxy film that keeps water and snow from building up on equipment and weighing the skier or rider down.

“Your ski works as a spring — they load and unload — so if your ski is covered in snow, it’s not going to be as efficient,” Arlein said.

Not only does that mean your tour is lighter so that you have more energy for more turns, but it could ostensibly improve a skier’s form. If you’re a skier whose quads are screaming in deeper snow because you’re sitting too far in your backseat to keep your tips from sinking, this might be something you need in your arsenal.

“We’ve gotten really good reception. People have been waiting for a product like this, it turns out, and now it’s available. We’ve had really good traction,” Arlein said of his company’s explosive growth since its inception less than two years ago.

Having a few years in the market means having feedback from customers, and while the spray was originally intended for topsheets, it can be effective on bindings and even skins, thus “upping” your uphill game, too.

“It works really well as a skin wax,” Arlein said. “[In] some conditions, your skin can get wet, and then it gets just full of snow. You’re no longer gliding — it’s the worst.” Arlein suggests giving the spray a little longer to dry if applying it to skins. With topsheets, “in a few min it’s dry and you’re ready to go,” he said.

Like the Beatles, Arlein gets by with a little help from his friends. Snow Shed Wax is completely self funded, so he’s relied on his connections in the industry to break into the market.

“I had worked in the ski industry for years and just had a bunch of friends who were willing to help out,” Arlein said. Many of the photographs featured on Snow Shed’s website were taken by his friends, and some of the “early adopters” of the product were his friends that owned ski shops, he said. “In this Valley, everyone is so supportive, and that’s what really made it worth it to launch on a pretty small budget.”

At the end of the day, the whole operations is an example of what Arlein called “a little bit of ski-bum ingenuity.” In Carbondale alone, Snow Shed Anti-Stick Topsheet Spray is sold in three locations. Look for it at Ragged Mountain Sports, Basalt Bike and Ski or Cripple Creek Backcountry.