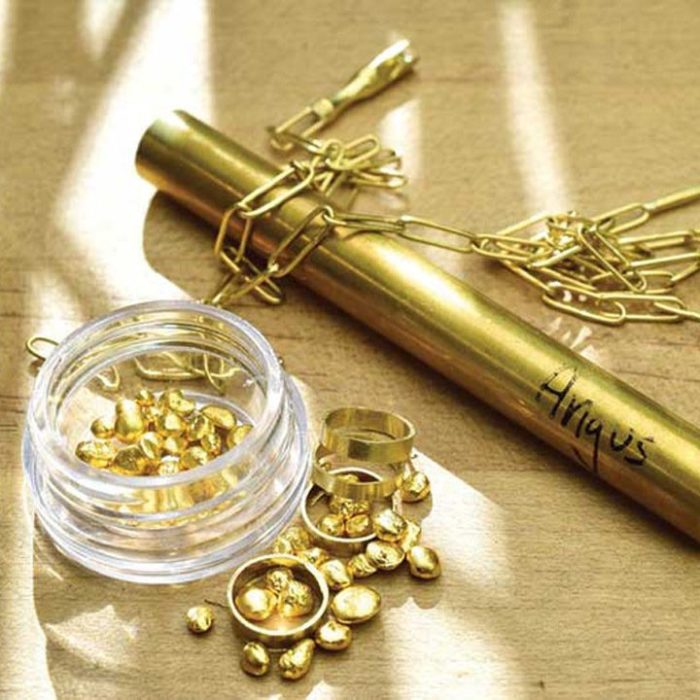 “Angus Chain,” made out of recycled gold by California-based jeweler Johnny Ninos

Angus Graham never wanted his work to become the point of conversation — in a handwritten note about his pottery, he described his art’s purpose as a complementary one. “Pots are never meant to be alone,” he wrote. “Thus I never want my pots to overpower a situation they are in. I want them to lead by example, or support from the shadows.”

The sentiment continues to reverberate into Graham’s legacy. This First Friday, the Carbondale Clay Center is dedicating the night to Graham, with a silent auction that will fund a scholarship in his name. Many of the pieces to be auctioned were made with Graham’s tools.

“Alleghany had this really amazing idea to spread out his tools and send them to artists and colleagues all over the country,” Clay Center Executive Director Angela Bruno said of Alleghany Meadows, founder of Studio for Arts + Works (SAW) and mentor to Graham. “They were invited to make a piece with the tools or just a piece inspired by Angus and send it to this auction.” For example, painter friends of Graham were sent some of his paint brushes that they then used to create a piece for the project.

“The physical person is no longer here, but the questions he was asking in his studio, he would ask through his hands and through his tools. He had an amazing assortment of tools. It felt like such a great way to pass on his questions,” Meadows said of the idea to gift his former assistant’s tools to other artists.

It was an idea Meadows described as a “spark,” and it’s since lit a creative fire: the Clay Center has received 100 items from those who received Graham’s tools — and that’s just “so far,” Bruno noted.

“The work is just incredible. It’s pretty humbling. It’s been really emotional,” Bruno said. “I think none of us want to be doing this, but it’s really beautiful how it’s turning out.”

Graham died in a car crash Aug. 25 in Oregon during a trip to watch last year’s solar eclipse. And while the 35 year old was a Maine native, he’d been a Carbondale resident since 2008. It didn’t take him long to make an impact on the Valley.

“He was a potter; he was a skier; he was involved in the yoga community. He was just an all-around Carbondale guy,” Bruno said. Graham had a studio at SAW, where he worked as a full-time artist. He was also a teacher at heart: in addition to teaching classes at the Clay Center, he was also a ski instructor for Aspen Skiing Company and the Rocky Mountain chapter of Professional Ski Instructors of America.

“He was an incredible, natural-born teacher,” Meadows said. “I would say that in art, in philosophy or spirituality and in skiing — everything he did, he was approaching it with this almost infectious curiosity.”

As for the scholarship fund’s future use, it remains to be seen, Bruno said. “Obviously having a scholarship fund established in his name is pretty amazing. We want to be really thoughtful with what we do and how we use those funds,” she said, adding that organizing the auction project has itself taken so much effort that everyone involved wanted to complete that before making decisions for the monies.

Bruno said that the scholarship will definitely go toward benefitting children in the area. “Angus was really passionate about helping disadvantaged youth,” she explained.

“I hope we are able to raise an incredible amount of money to make this an ongoing scholarship fund that will last for decades,” Meadows said of his hopes for Friday’s event at the Clay Center. There is also a online auction (tinyurl.com/ybat72tv) that will remain active until noon on Feb. 2. All proceeds from both the online and in-person auctions will go toward the Angus Graham Memorial Scholarship Fund.

In that same handwritten statement, Graham acknowledged that his pottery wouldn’t always be in the shadows. “And yet when they are called upon to be observed, I want them to stand proud and speak… without hesitation,” he wrote. That sentiment, too, will forever be a part of his legacy — his friends and colleagues are making sure of it.