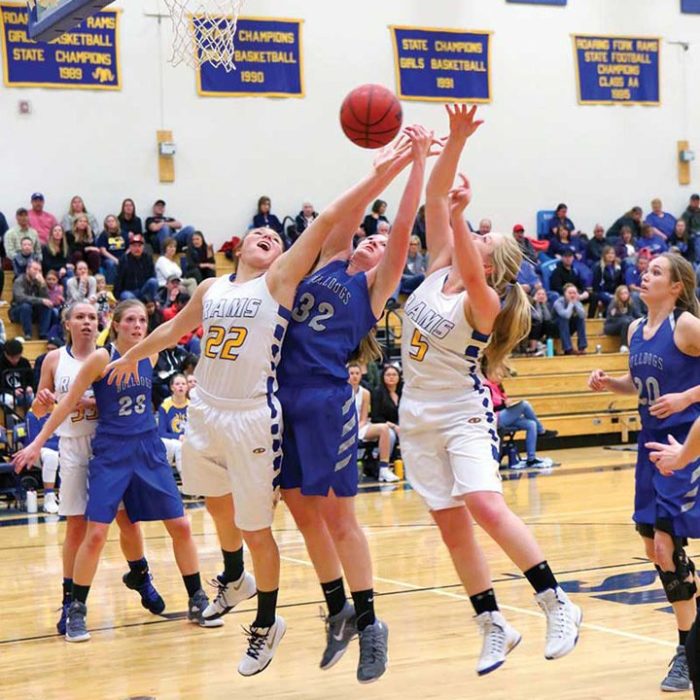 Hosting Moffat County on Jan. 26, the Roaring Fork girls’ loss came down to the final seconds while the boys’ victory seemed assured almost from the start.

While the lady Rams held the lead for most of the three-pointer-laden game, the Bulldogs managed to pull ahead 41-40 with a minute left in the game. A quick set of turnarounds and a missed foul left the Rams in possession and coming out of a time out with 2.8 seconds on the clock, but Logan Erickson’s final three-pointer attempt slid along the rim and out.

That leaves the girls with a comfortable 7-5 record overall but a 1-3 record in league. They’ll have a chance to improve on that over the weekend with games against Basalt and Olathe, both of which are 4-9.

It was an inversion of the split showdown against Coal Ridge the week before, which resulted in a 47-42 win for the girls and a 68-64 loss for the boys.

That game added injury to insult for the boys when Joe Salinas suffered a reported twisted ankle. He remained on the bench for most of the Moffat County match, but his teammates were more than willing to make up for it. Aiden Sloan put points on the board less than 5 seconds after the tip-off and Justin Thompson sunk a pair of three pointers before the Bulldogs got a basket of their own. Roaring Fork seemed to pick up each rebound without opposition and pass their way around Moffat’s zone defense. By the end of the first quarter, the Rams were ahead 25-7. By the half, it was 37-16.

The Bulldogs managed to close the gap somewhat in the second half, but the lead was too steep to overcome. The final score was 67-51.

The win leaves the boys ranked 12th in the state for 3A, but in a league with Grand Valley at fifth and Coal Ridge at sixth. Sterling  takes the top slot as the sole undefeated boys team in the state. The guy Rams will also take on Basalt (4-9) and Olathe (7-6) over the weekend.