Sisu endures — but we could use six weeks of winter 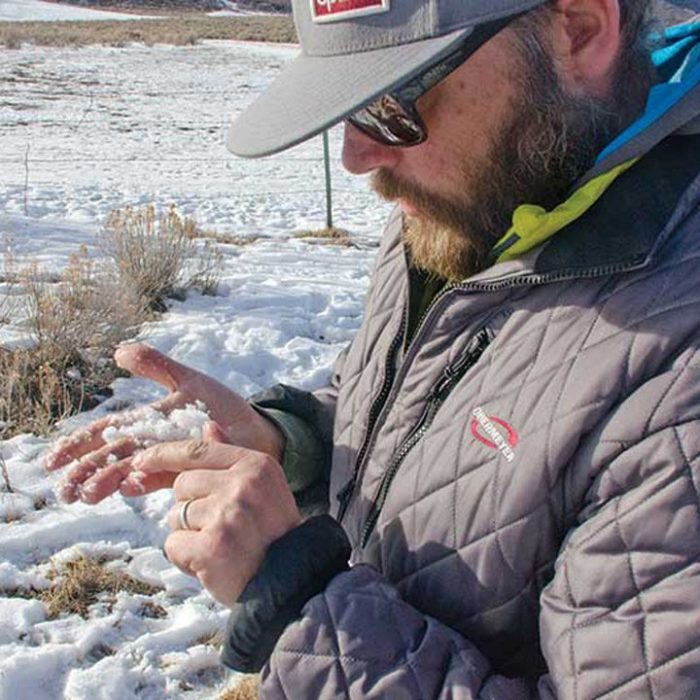 Pitkin County Road and Bridge Engineer Gerald Fielding assesses the quality of the snow at the base of the Spring Gulch Trail System. Photo by Will Grandbois

On a warm January day, a group of men regarded the muddy entrance to the Spring Gulch Trail system with the practiced eyes of recreationalists, ranchers and engineers.

It’s ostensibly a meeting about parking lot improvements, but the spectre of drought is pervasive.

“We used to say it was a good winter if by the first of February the sagebrush up here was completely covered,” noted Bill Fales, a local rancher who recently made headlines for an agreement that will keep more water in the Crystal River.

It’s far from that this year, with more bare ground and lighter cover up high than Fales remembers even in the infamous winter of 1976-77. Still, resorts are getting by. Sunlight is currently reporting at least a 14” base in time for its own Ski Spree event this weekend, and Spring Gulch has seen better conditions since the cancellation of a planned cross country ski clinic and gear demo.

“It’s been a tough year for everybody,” said John Armstrong. “But right now we’re skiing from the bottom and it’s been quite good up high.”

As such, it looks like the annual “Ski for Sisu” fundraiser will go ahead as planned from 9 a.m. to 3 p.m. Feb. 4 — not that an event that gets its name from the Finnish concept of grit and determination wouldn’t have persisted, anyway.

The traditional 3.5k, 10k and 12k non-competitive ski-athon is still weather dependent, with a back-up plan involving a community snow dance and hike up to Paul’s Point. Regardless, there will be refreshments, fire pits, face painting and a silent auction. Donations are encouraged.

“It will be nice for everyone get together and we’ll have fun,” Armstrong said. “We’ve had a lot of the same expenses as we have in a normal year, so hopefully this is an anomaly in the big picture.”

Looking back to look forward

The Climate Prediction Center’s drought outlook for the spring doesn’t look promising for an already parched southwest, but Liza Mitchell, education and outreach coordinator for the Roaring Fork Conservancy, isn’t ready to give up on winter until at least April 1.

“Over the last 30 years or so, that’s a date when people are reasonably comfortable… using the data to make some very real projections about how much surface water we’ll see,” she said. “We’re at the end of January and there’s two full months ahead that could determine what the rest of the year is going to look like.”

She pointed out that last year was a strong snow year up high, making the contrast even more dramatic.

“Humans have a pretty short memory,” she noted.“ We all live down in the valleys where it’s even more obvious.”

That’s where hard data comes in handy, and Mitchell shares it with the public in a weekly report. The Jan. 25 edition reports snowpack for the entire Roaring Fork watershed at an alarming but no apocalyptic 70 percent of the rolling 30 year median.

“Our snowpack is a heck of a lot better than southwest Colorado, and even within our watershed it varies,” she noted.

The telemetry site at McClure Pass, for instance, is reading at 38 percent of normal, while the Ivanhoe site is actually at 120 percent. The path of one big storm can make all the difference.

“A little bit of moisture goes a long way,” Mitchell said. “Everyone always wants answers, but the weather and the climate are only becoming more unpredictable.”

“If we stay on this pattern of high and dry, then we’re going to enter into spring and summer with a lot of concern about drought conditions,” she said.

A wet season last year would help somewhat, with water in the reservoirs on both sides of the Continental Divide. But if the Eastern Slope or big cities of the southwest don’t have enough water, we’ll hear about it here.

“We may see a ton of water in our streams, but legally speaking we have to see it go by because there are senior rights downstream,” Mitchell explained.

There are also numerous factors other than snow pack that impact water resources in the summer. Antecedent soil moisture — how wet the ground was before it froze — alter how much runs off and how much is soaked up. And even when things start to melt, a cool wet spring is very different from a hot dry one.

“The sooner that the ground is bare, the sooner the vegetation is going to start growing and the more water is it’s going to use,” Mitchell said.

And while it’s still too soon to forecast the runoff, she emphasized that it’s never too soon to start conserving water.

“Every one of us are water users, so it’s something that concerns everyone,” she said. “So much of our economy is based on it — whether it’s rafting or fishing — and ecologically speaking, about 80 percent of Colorado’s wildlife depends on 1 percent of the land area in riparian corridors.”

Anyone interested in learning more about the watershed can visit roaringfork.org and might consider signing up for a day-long workshop and field trip on March 9.

As for SiSu, the weekend forecast is promising. Beyond that, an unidentified skier may have expressed everyone’s fears best as he trudged past on that aforementioned January day:

“This is a little image of the future.”