Leach’s legacy and 40 years of firefighting 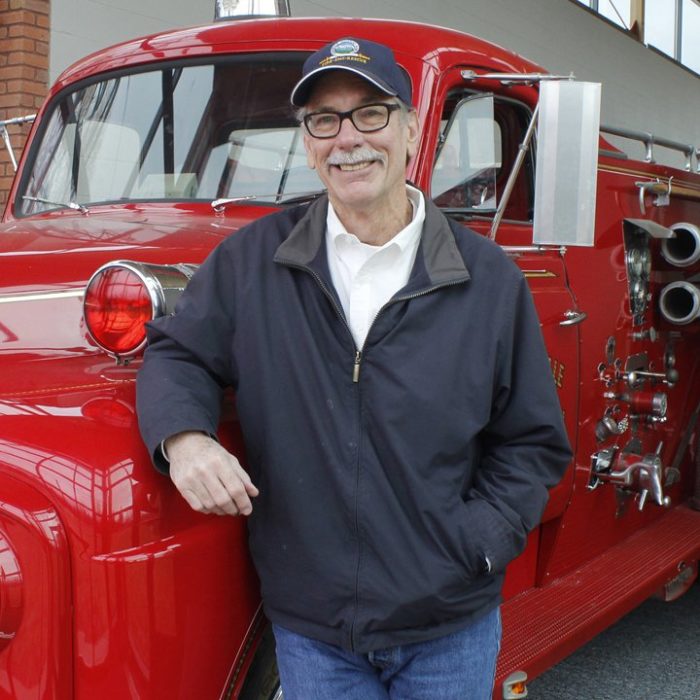 In Ron Leach’s opinion, his 40-year career with the Carbondale and Rural Fire Protection District isn’t about him.
“I want my legacy to be about the people I worked with,” he told The Sun on Feb. 4 — his official last day at the helm after 36 years as chief. He had plenty of names to drop like Darien, Nieslanik, Perry, Turnbull, Thompson, Ferguson and Cerise; amd some more specific to the department, like Mcshain, Bush, Busby, Soucie, Mick, Gavette, Katz, Luttrell and Nuckols.
“Those are the people that built this place,” Leach said. “It’s their shoulders we’re standing on.”

Setting the scene
To even begin to grasp the arc of his career, one ought to start with a vision of Carbondale as it was when Leach arrived here from southern California in 1972.
“It was like a Norman Rockwell painting or something,” he said. “I’d never seen anything like it.”
The streets were dirt, the elementary school just the Round Room section of the current Third Street Center and the handful of businesses along Main Street were humble: the original Black Nugget, T-Jo’s, Kenny’s Pharmacy, Marie’s Bakery, Larry’s Little Super…
“I remember the guy (Lary) used to have the place open at night in case somebody needed a quart of milk or something and he’d leave a cigar box on the counter for you to pay,” Leach recalled.
The town’s part time police officer spent most of his days repairing cars at Barry’s Garage. Leach himself was here for the burgeoning construction trade.
“Aspen was really just coming on the scene as a ski resort and they were building thousands of condominiums there and in Snowmass,” he said. More of a surfer than a skier, he nevertheless bought a four month unlimited pass — for $150.
By far the biggest employer was Mid Continent Coal and Coke, which operated out of Coal Basin near Redstone and supplied smelting fuel for the Korean auto industry, according to Leach.
“Everybody in this town worked for the coal company in one way or another, it seemed like,” he said. “Those coal trucks hauled for Mid Continent to the loadout 24/7/365. They would fill 100 box cars twice a week.”
But a demographic shift had begun, and Leach was part of it.
“Intermixing with the cowboys and coal miners were these young blue collar workers from places like Chicago, California and New England,” he said.
The fire department reflected the town. When dispatch would get a call, they’d trigger a large siren outside the Near New. The first responder to the station in what’s now the KDNK building would turn off the siren, call in for the details and write them up on a big chalkboard before heading out. It was an all volunteer affair — leading to shortages during the day or when everyone was at the bar Friday night — but by 1980 that needed to change.
“The community was changing and there was more need and more demand, so they needed someone to run this place,” Leach said.
Having started volunteering three years earlier, he found himself in the right place at the right time to take on the almost-new role of paid chief.
“I had a sense of organization and business and probably some rudimentary leadership skills,” he reflected. “I didn’t know if it would last 6 months, let alone 37 years.”

Bad days
On April 15, 1981, a year after Leach became chief, an explosion rocked Mid Continent’s Dutch Creek No. 1 Mine — an event he characterizes as “the biggest, most important incident in the town’s history.”
The company was actually having a union meeting at the firehouse, so everyone got the news at the same time. Crews mobilized and soon had the injured on their way to the hospital, but soon Leach and his fellows found themselves waiting just like everyone else as hope slowly shriveled up.
Mine rescue teams from around the state and beyond worked for days to reach the 15 unaccounted for miners.
“It was an excruciatingly slow process and everyone was waiting,” he said.
When word came that there were no survivors, “The whole town shut down. The schools closed. Nobody went to work. It was quiet for months. Anybody who was here will agree that that day Carbondale changed forever. Those were our friends, our fathers and our sons.”
That proved to be the case even when the disaster was down the road. Local fire departments have a long history of mutual aid, and when an explosion collapsed the Rocky Mountain Natural Gas building in Glenwood Springs on Dec. 16, 1985, Carbondale not only responded — it had a in the rubble. As crews cut their way through rebar and concrete in the earthquake-like aftermath, the survivors were trapped between the residual flames and the firefighters efforts to put it out with frigid water on an already cold day.
“It all came down kinda like a house of cards and many people were trapped,” Leach recalled. “We had never contemplated that type of rescue, but Jim Mason was a great incident commander and many lives were saved.”
Then there was the South Canyon Fire, which blew up on July 6, 1994. It had started a few days earlier as a one-tree affair and been mostly ignored in favor of more pressing needs.
“There were a lot of wildfires on the Western Slope that week,” Leach said. “Federal forces and local departments were stretched to the limit.”
By the time a cold front came through and the wind came up, however, around 50 firefighters were in harm’s way. They ran for the ridge, but not all of them made it.
“We heard on the radio that there had been shelter deployments,” Leach recalled. “That’s unusual and that’s bad.”
As the injured began to make their way out to Interstate 70, crews from all over tried to put together a plan, first from a garage in Canyon Creek and then from Glenwood Middle School. By the time the media showed up and the governor was on route, they had a pretty good idea that 14 people had succumbed to the flames.
“It affects you deeply when a fellow firefighter gets killed. Most of them were kids in a summer job, and they died protecting a bunch of damn brush,” Leach observed. “There was nobody to blame. We took it seriously and we learned from it.”

Better days
Not every big call ended in tragedy. In June 1983, a fuel delivery went awry at a Conoco-owned storage facility which occupied the lot now used for Christmas tree and leaf collection. A hose failed, and a stream of gas spewed out and caught fire from the pilot light of a furnace in the building’s office. Thousands of gallons of gasoline and diesel were about to go up.
“The Carbondale Fire Department came of age that day,” Leach said. “If the tanks would have exploded, the burning gas and diesel would have gone all over and burned down downtown. It would have been in the history books.”
Fortuitously, several firefighters had just been through a course at Texas A&M University that included petroleum fires.
“We learned these skills down in Texas, and all of the sudden there was this scenario just like what we’d been trained on,” Leach said. It saved our lives and that of many residents.”
They also had a lot of help from the police department and even civilians like H.P. Hansen, who organized an evacuation, while a news crew who happened to be in town filmed it all. It was a two hour fight to fend off the flames and reach the shut off valves, then two more to get everything doused.
Another source of pride for Leach is the Pearlington Project, which the fire department helped coordinate in 2005 following Hurricane Katrina. The actual impetus came from regular citizens who wanted “a community to community connection.” A call to the Times-Picayune revealed that no one had heard from Pearlington, Mississippi, three miles off the gulf coast. Pretty soon, a steady loop of trailers was headed there from Carbondale with supplies.
“All of the relief was going to New Orleans and there were hundreds of little burgs getting bypassed,” Leach explained. “These people had lost everything, so a good tent and sleeping bag and a Coleman stove was life saving.”
The effort lasted six months, and to this day, Leach says, if you’re from Carbondale, you’ll have a place to stay and a hot meal in Pearlington.

Changing times
Early on in Leach’s career, fire really was the name of the game.
“There was at least a structure fire every week and sometimes three or four,” he said. “Today, there’s maybe two or three serious ones a year.”
He puts that down to stricter building codes (or any at all), sprinkler and alarm technology, fewer woodstoves and more education starting young. Meanwhile, ambulance calls have risen until it’s the majority of what the fire department does. The advent of 911 created an almost immediate increase in call volume. Before that, you had to memorize a seven digit number that “nobody called unless they really needed help.” Pagers and eventually cell phones would further streamline the process long term.
Firefighters and EMTs are also working on doing a better job of taking care of themselves, with help from The Aspen Hope Center.
“They’re doing a wonderful job of responding to the responders,” he said. ““It takes a toll on a person’s soul to be around injury and death, and there are measurable effects. In emergency services, there’s a higher rate of suicide, of divorce, of drug abuse than usual.”
It’s particularly difficult in a small town, where you know many of your patients.
“It’s extra hard to take care of your friends and neighbors and it happens a lot,” Leach said. “In the back of your mind, you’re dreading the possibility of victims being loved ones.”
He’s proud never to have lost a firefighter or EMT in the line of duty, but sometimes stays awake at night worrying about the potential for a large, devastating fire in the district. Still, he thinks it’s time to hand over the reigns.
“I’m not going anywhere,” he said. “It’s been a wonderful career. I just don’t want to be chief anymore. It’s time for new things.”
He plans to continue to volunteer and team EMT classes, and remains the town clerk in Marble, where he’s lived with his wife, Lisa, since 2001.
“My life is about my family and friends,” he said. “The job takes a lot out of them, too, and they’ve always supported me.”
You’re likely to see him four wheeling up Lead King Loop or fishing with his grandchildren.
Meanwhile, the fire district now handles around 1300 calls a year and boasts five stations, 20 fire trucks, four ambulances, 22 paid staff and 60 volunteers. That’s thanks in part to voters approval of a 2004 base mill levy increase and subsequent support.
“That allowed for this district to blossom,” he said. “Without it we would not be nearly as sophisticated or capable.Volunteerism is kind of going the way of the buffalo. Everybody has two jobs. People don’t have the time anymore.”
Leach is optimistic about the future of Carbondale, which he characterized as “a big, grown up community — vibrant, alive and diverse” and the department. He’s leaving things, temporarily at least, in the hands of Interim Chief Rob Goodwin who he called not only ready but talented and conscientious and a staff he trusts.
“These people are the best,” he said. “They know their trade and take care of each other.”