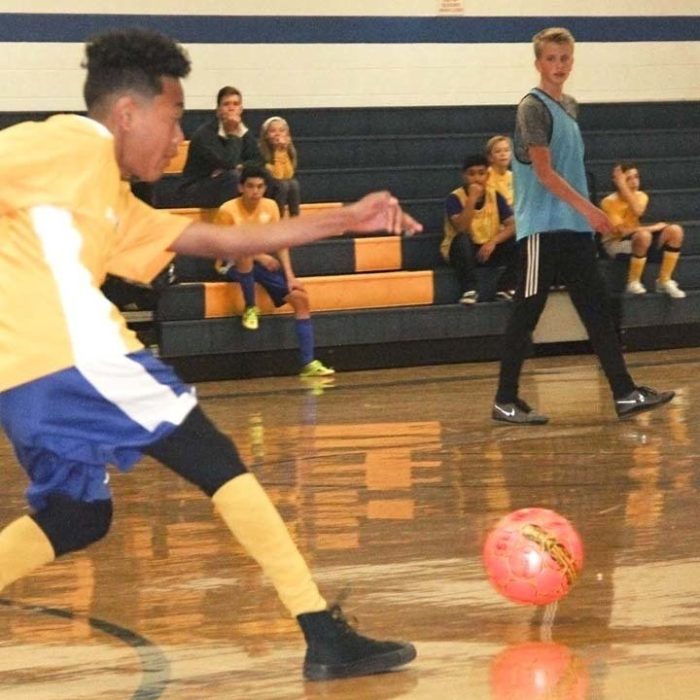 A couple years ago, sixth grader Mia Cubias would have been spending her weekends this time of year planted in front of their family’s television or playing soccer with her dad and uncle inside their garage. Now, she spends most of her weekends at the Carbondale Middle School gym—playing futsal (a form of indoor soccer) with her friends as well as her mom, and cheering on other futsal teams.
Mia has joined the Roaring Fork Futsal league, which basically takes over the school’s gym every weekend and some weeknights for seven months, from September through March. The women’s teams play Thursday and Friday evenings, the men’s games run from 8 a.m. to 10 p.m. on Saturdays, and kids’ games run from 8 a.m. to about 8 p.m. every Sunday.
“The gym is like our second home,” said Mia’s mom, Paty Cubias. Mia has improved her skills enough to join her mom’s adult team in addition to her age-group team.
The league is the brainchild of two Carbondale friends, Enrique Palomares and Marvin Romero. Avid soccer players since their youth, they hated seeing so many kids spending their winter weekends primarily in the company of Nintendo and Playstation. Both men had been participating in an adult futsal league; they wanted to provide a similar opportunity for kids.
With limited resources at their disposal, they decided to form a league in which the registration fees from the adult teams would cover the costs of a kids’ league, giving kids the opportunity to play at little or no cost. The only way to make the numbers work was to form a nonprofit corporation, which would enable them to pay the significantly reduced non-profit rates for the school gym rental. Another friend helped with the nonprofit application process and, by the fall of 2016, Roaring Fork Futsal was born. Romero became the president of the board; Palomares is the vice president.
Now in their second year of operation, RF Futsal has increased the number of adult teams participating by 50 percent from last year; and the number of kids’ teams has grown from just a few teams when they first began, to 26 teams this year.
With 26 teams in the men’s league, 10 teams in the women’s league, 26 kids’ teams (U10, U12 and U14), and about 10 players on each team, RF Futsal now serves a total of over 600 participants.

More than just a sport

Futsal is typically played on indoor basketball-type courts, with five players on a team. The term “futsal” comes from a combination of the Spanish words fútbol (soccer) and sala or salón (hall or lounge). For Romero, it was the oppressive heat of the summer months in his native country of El Salvador which drove him and his friends indoors for their soccer fix.
Palomares sees futsal as a way to teach kids “lecciones de la vida” (lessons about life), he told The Sun, “cómo ganar y cómo perder” (how to win and how to lose). It teaches kids to get back up after being defeated and tell yourself, “Voy a trabajar más duro para hacer mejor la próxima vez” (I’m going to work harder in order to do better the next time). He believes playing futsal also builds kids’ overall sense of motivation in their lives.
Additionally, Palomares and Romero see their futsal league as a way to help unify the community. The two friends noticed the tension in the community between people from different Latin American countries, such as Mexico, El Salvador, and Guatemala. They hoped their unified soccer league would help bridge some of those divides.
They intentionally set very strict guidelines, making sure that the ref’s did not hesitate to use a red card to pull a player out whenever they played too aggressively or unfairly. They believe their strict adherence to the rules has helped build a sense of community among all the players. The competition is intense while they’re playing, Palomares said, but everyone is friendly once the games are over.
As the number of Anglo participants has increased this year, Palmares said the league has helped build connections among Anglo and Latino community members as well.
RF Futsal also created a plan to help girls and boys on the kids’ teams learn how to play well together, and to ensure that the girls get their fair share of playing time. Every kids’ team must include at least one girl (most have two); and at least one girl per team must be playing on the court at all times.
Mia admitted that “the boys pass the ball really fast, and it’s hard to keep up,” but she’s up for the challenge. She noted that the boys on her team treat her well: “They actually pass the ball to me,” she told this reporter while watching a men’s game last Sunday.

RF Futbal’s main expense is the rental of the facilities. In addition to the games on Thursday through Sunday, the kids’ teams also hold practices a couple times each week, and they play outside in the summer months at Crown Mountain Park. According to Palomares, the total cost of facility rental for this year will be about $19,000.
The program is primarily supported by the men’s team. Each team pays $400 for the season, and $40 per game. The women pay $200 to register for the season and $25 per team for each game. The kids’ teams pay $150 per team to participate.
The participation fees that are collected go right back into the program, Romero explained, aside from paying a couple of the ref’s and some cash prizes for the winners of the adult tournaments in March.
They also keep the costs down by finding local businesses to sponsor the teams’ uniforms (about $250 – $300 per team) and using volunteers to coach the kids’ teams, do most of the reffing and all of the administrative work.
Although things are running smoothly, the league would like to grow. So many kids wanted to participate this year that they had to turn teams away. They would like the $19,000 they spend each year in rental fees to be invested back into a facility of their own—a place that would operate year-round. They’re looking for sponsors to help them with loans or investments to purchase or build a facility, perhaps starting out with a rental agreement.
RF Futsal is not a member of the Colorado Soccer Association (CSA), the parent organization of the Roaring Fork Soccer Club. Romero explained that he does see some advantages to being a part of the CSA, mostly the opportunity to play teams outside of the valley. However, he believes that the increased costs associated with joining CSA would impede their goal of providing very low cost opportunities for kids. Many kids do play in both the RF Soccer Club and RF Futsal.
Despite his goal of uniting the community, Palomares acknowledged that there are other soccer organizations in the valley who see RF Futsal as a competitor. RF Futsal would be happy to work together with others, Palomares said, as long as they could continue their very low cost soccer league for kids.
“We’re not trying to compete with anyone,” Romero said, “Nobody’s making any money…” And hundreds of kids are now spending their weekends playing and watching futsal.