Cousins compete on the court 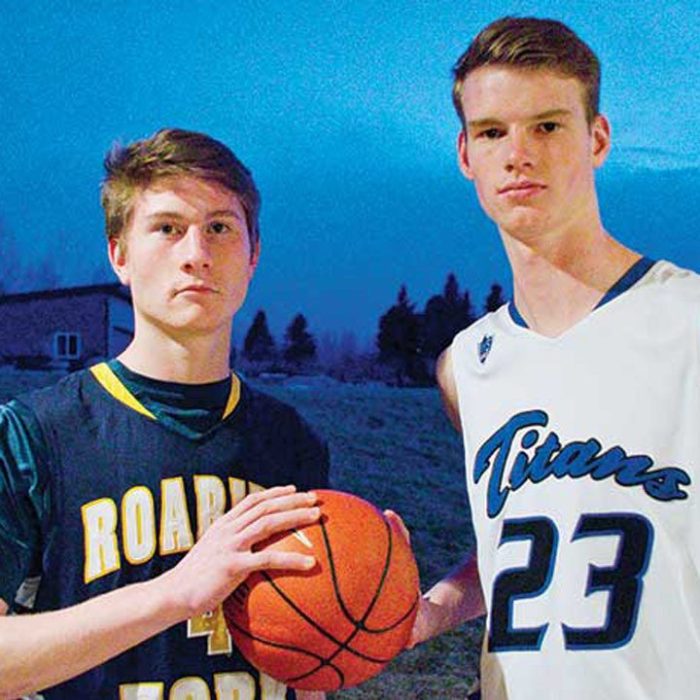 With grandkids on both of the Western Slope’s top high school boys’ basketball teams, it’s sometimes hard for Jackie and Lew Ron Thompson to decide when to cheer.
“We just sat at the side and nodded with each score,” Jackie recalled of the showdown between Roaring Fork and Coal Ridge on Jan. 23.
Justin Thompson is the top scorer for the second-ranked Rams, with an average of 20.4 points per game. Connor Detlefsen is a center for the top-ranked Titans. The pair also go head to head in track and field — and they’re just the latest chapter in a saga of family athletes.
“The family has always been involved in sports one way or another,” Lew Ron said.
Lew Ron himself played for Roaring Fork in an era when the Rams won 96 out of 100 consecutive games and were state champions twice.
“Carbondale has a long tradition around school sports,” he said.
“What else was there to do?” Jackie added.
Regular folks supported the high school teams like they do the Rockies or the Broncos today, and the whole town closed down for the playoffs, with folks who had never been as far as Denver making the trip.
Jackie, for her part, is a Glenwood graduate from a time when women’s sports weren’t really a thing in high school. She still swam for a camp in Grand Junction and ended up majoring in Physical Education at the University of Colorado. Her family’s inclination toward individual sports is balanced by Lew Ron’s belief in group competition.
“I think team sports are good for kids in a lot of ways,” he said. “They really help you work on the kinds of things you’re going to have to do in life.”
Their kids, all of whom came back to the area to raise their own families, inherited a mix of those philosophies. Both Justin and Connor have older siblings who excelled in athletics to serve as role models and competitors.
“I’m competitive in everything I do,” Justin said.
Connor, by contrast, didn’t really devote himself to basketball until after a year abroad, sophomore year.
“I wasn’t really a standout player until I got back,” he said. “Then I started training and working more.”
Both boys have managed to maintain excellent grade point averages, and Connor also works as a lifeguard at the Hot Springs Pool. And while they’re both hoping to outdo each other in track, they’re well aware that basketball is far from a one-on-one showdown.
“I knew it was going to be big before the season even started,” Justin said. “Not just for us but for the schools.”
When the teams finally clashed, Justin had the satisfaction of blocking Connor off the backboard, but it was Coal Ridge that went home with the win, 68-64. That’s the Rams’ only league loss and the Titans closest league game. With Joe Salinas, who suffered an injury that left him on the bench for most of the second half of that game; now back in action, a rematch would be interesting.
There’s a good chance they’ll get it, as both teams advance through the district tournament in hopes of being the team to host regionals. Not that Justin is willing to assume anything.
“There’s no cake walks in our league,” he said. “If we’re not playing our best, there are going to be teams to come up and grab you.”
But if they do meet again, they’ll be ready.
“I think it will be a battle again,” Justin said. “Both teams have just gotten better.”
Added Connor, “We both know the stakes.”
After that, there’s a good chance they’ll be off to the state championships, where MaxPreps has Coal Ridge ranked fifth most likely to win and Roaring Fork tenth. Both teams suffered nail-biting losses in the Sweet 16 last year.
“It’s a whole different ball game on the other side of the hill,” Connor said. “Those schools have a tradition of success, but that just drives us to get people to know us… I’m hoping to just have the team click and do our best. If we don’t make it all the way, we should leave everything on the court and have no regrets.”
Either way, you can be sure Jackie and Lew Ron will be there.