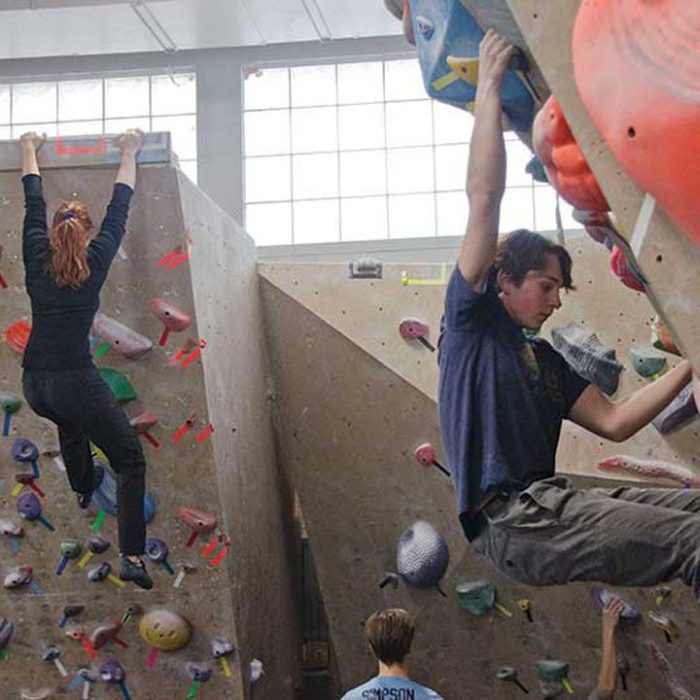 The Colorado Rocky Mountain School Oysters are hoping for lucky numbers 7 and 3 this weekend in Colorado Springs, where CityROCK Climbing Center will again host the Colorado High School Climbing League State Championships on Feb. 24. If the Oyster boys come out on top, it will be their seventh championship in a row. If the girls do the same, they’ll be celebrating their third such victory.
The weekend’s competition is the culmination of a five-month season of eight regular-season events and a regional competition where 130 climbers from a dozen Western Slope schools competed.
“There are about 45 high school [climbing] teams in the state — more than twice as many climbing teams than ski teams,” an Oysters climbing coach and Western Slope Regional Coordinator Dave Meyer said. “It’s a legitimate high school sport.”
Meyer, who served as the CRMS climbing program director for more than a decade before passing the proverbial torch to Tracy Wilson, remains active in the climbing scene, as does his son. Toby Meyer, a CRMS junior, took 12th at the Western Slope Regionals earlier in the month and is among several of his Carbondale-local teammates who also placed. Fynn Blake, a senior and a team captain, took 3rd and Andrew Meisler, a senior but first-year on the team, took 8th.
The girls saw similar successes at regionals and Carbondale was again well represented: sophomores Anja Simpson and Nicole Pierson placed 3rd and 5th, respectively; senior and team captain Lauren Murphy took 6th; senior Viola Gortan took 7th, freshman Alice Amdur took 8th; and senior Jessie Bright took 10th.
“I think our biggest strength as a team has always been our depth,” BJ Sbarra, another coach, said of the Oysters climbing team. “The team score is taken on your top three climbers. We had eight girls just qualify for varsity. So even if someone has an off day — we all have off days — we have all these other people that are there who could take up that slot. There’s usually not a lot of schools out there that have that kind of depth.”
Tracy Wilson, current climbing program director, agreed. “I think what’s neat about our team is a lot of our athletes have never climbed before.,” she said. “The coaching is really knowing your athlete. It’s full-body development and also really assessing weaknesses. Are you weaker in endurance or weaker in strength, and what are the workouts that we can give you that are going to increase those kinds of things?”
And while the team has a strong history of dominance in its sport, climbing is different than many of the more traditional high school sports that involve a ball.
“Frankly, the whole idea of ‘me beating you’ I don’t think is a very good educational tool,” Meyer said, adding that the focus is instead on creating adversity between students and the wall, not just between students. “The idea is to focus on the best aspects of climbing: perseverance, teaching trust and resilience and communication. At a competition, you will see kids from three or four different high schools all working on the same boulder problem, and they will share ideas.”
Meisler, who recently qualified for varsity, has already experienced that collaboration firsthand. “Usually, I do ropes first [in a competition], use up most of my time getting those and then go into boulders. A lot of people do boulders, so I can go and ask them, ‘What are the good routes? What’s the beta?’”
As a team captain, Murphy tries to foster the best parts of climbing. “I think that my favorite thing about climbing is probably the team aspect of it,” she said. “It’s about supporting each other, seeing growth and being with other people. I think we try to help support younger kids, especially my sister — she’s a freshman on the team.”
And for Murphy’s co-captain, Blake, it can be distilled even further: “Keeping up the stoke.”