Forging a new heritage along the Rio Grande ArtWay 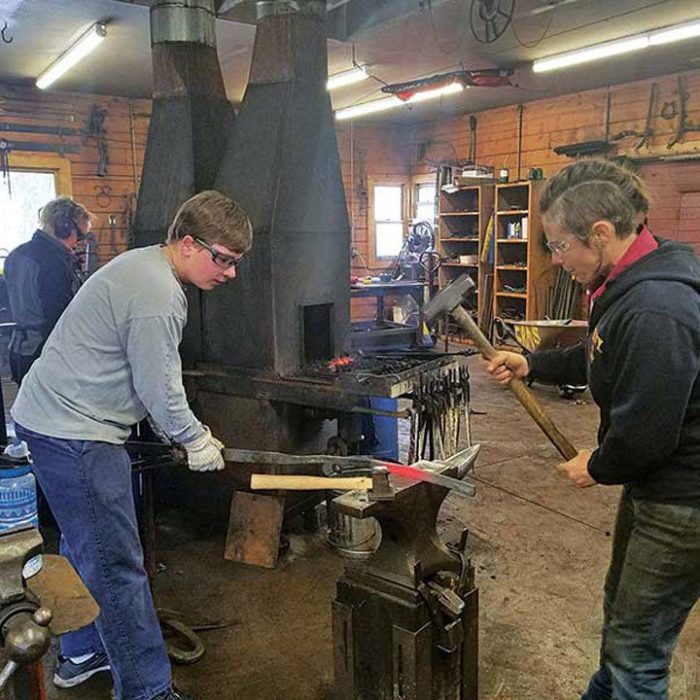 Imagine having an entire week to dedicate toward an out-of-the-box intellectual pursuit — something you’ve always been interested in learning more about but for which you could never find the time. Every February, Colorado Rocky Mountain School ensures its students get just such a week in what the curriculum calls Interim.
This year, seven students and one Spanish teacher opted to spend their week at the Francis Whitaker Blacksmithing School on the CRMS campus. For most, it was their first time working with metal and fire. They all left having created something permanent, both for themselves and the community: many of the student-crafted sculptures are destined for DeRail Park, one of three parks that are in the works along the Rio Grande ArtWay.
“I’m real excited to have the students involved in this project,” said Olivia Pevec, who teaches blacksmithing at CRMS and is coordinating the arch project design for DeRail Park, near Highway 133. “Each of the things they are contributing is like a little piece of immortality. Iron lasts and lasts way longer than we do. It’s a neat heritage. We’re building a future heritage,” she said.
At CRMS, blacksmithing is a decades-old heritage — one that can be seen all over campus. The candlesticks used at formal dinners? Forged by students in the blacksmithing program. Even the bike racks and coat racks throughout the school’s property are student made. That’s largely due to the legacy of Francis Whitaker, Pevec said.
“Francis Whitaker was the master of the shop. People call him the father of modern American blacksmithing,” she said of the Austrian immigrant who inspired John Steinbeck’s central character in ‘“Chrysanthemums” and generations of future blacksmiths. Whitaker moved to Carbondale in 1988 as a live-in blacksmithing artist at CRMS. “He had made his mission to keep the craft alive, so people came from all over the country — and they still do come — to this shop to learn the craft and the art,” Pevec said.
It’s fitting that students spent their Interim week creating pieces for the future arch at DeRail Park, what Pevec described as “the gateway to the Carbondale Creative District.”
“I’m really interested in reinvigorating the connection between the school and the town,” Pevec said. “Sometimes the school is a little bit like its own town, you know? And that’s great — there are so many cool things here and it’s an incredible community, but I want to live in both.”
The arch itself has been a year in the making, and it’s just a piece of a mile-long mosaic. “The thing is, the whole Rio Grande ArtWay is a creative placemaking project,” Carbondale Arts Executive Director Amy Kimberly said. “It involves all different segments of the community to make it happen. I think the arch is a perfect example.” While she approached Pevec to design the arch, incorporating CRMS students to make it happen was Pevec’s idea, Kimberly said.
CRMS is just one of several entities that are contributing the arch’s successful implementation.
“Arches are expensive. A lot of incredible people have stepped up to help make it happen,” Kimberly said. The Carbondale Rotary and Mt. Sopris Rotary clubs together raised $10,000 for DeRail Park and have contributed volunteer labor. The Roaring Fork Transportation Authority, which owns and maintains the Rio Grande Trail, has also helped with labor.
“Of course we can’t do it without RFTA,” Kimberly said. “They’re into it — they’re very supportive.”
As for the arch itself, the students’ sculptures are slated to be installed in October. Before that — ideally in August, Kimberly said — the main architecture will need to be in place. Joe Burleigh of Roaring Forge, Steven Novy of Green Line Architects and Stuart Edgerly of Big Steel Structures are among the creative minds helping make Pevec’s design dreams a reality.
“That’s the amazing thing about creativity — all these creative people are coming together to figure out how we can have an arch that we can afford that has the integrity of Olivia’s design,” she said.
That kind of collaboration happened during CRMS’s Interim, too. In order to help morph teenage novices into blacksmithing artists in a week, Pevec elicited the help of her friend and local blacksmith and jeweler, Natasha Seedorf, who also teaches at Colorado Mountain College and Anderson Ranch.
“I’m really into teaching. I learn so much from the students,” Seedorf said. “Jewelers, the metalsmiths, the teachers, the students — we’re all kind of blending.” 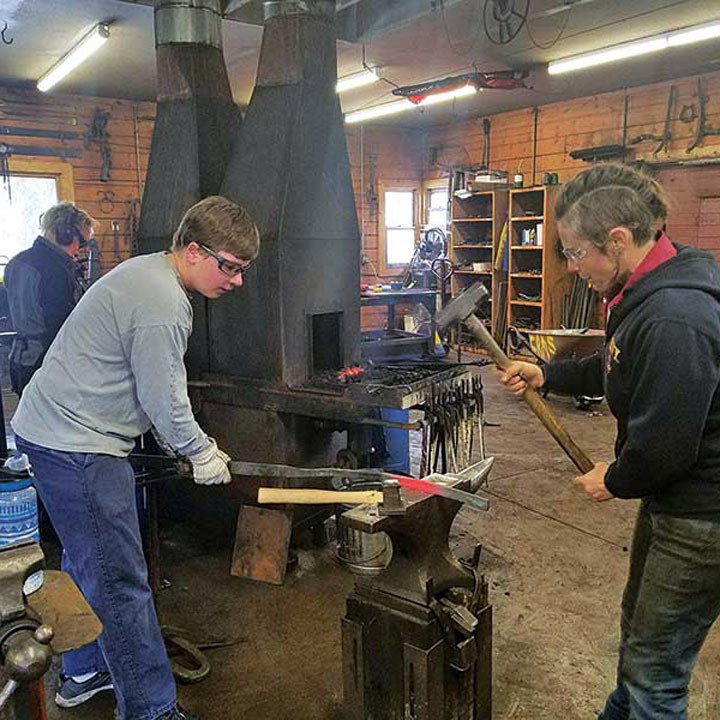