Brushes behind bars for an artist, activist 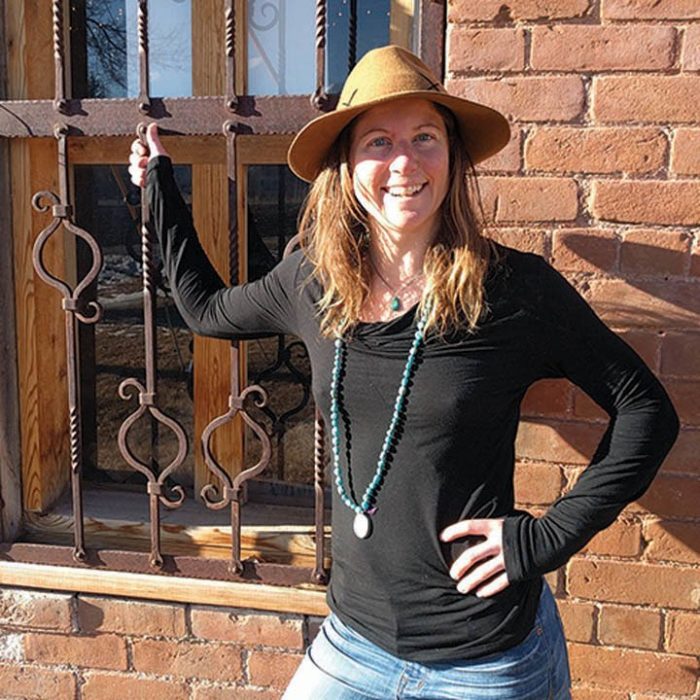 Sarah Uhl has been in jail for the last several months and will remain there for the foreseeable future.

“It’s endless, how fun it is to say all these things about jail,” she said about her art studio. The Old Jail, part of the Mt. Sopris Historical Society, originally sat at Main and Second Streets after being built around 1900. Relocated to its current site at 499 Weant Blvd in the 1990s, it now serves as an art studio — first to potter Michelle Zinanti and now to Sarah Uhl.

“The historical society wanted to have an artist in here,” Uhl said. “They wanted someone who would do openings and be a part of the community. I would love to help bring vitality around, because I think it’s awesome, all the stuff that’s in the cabin right there.”

While the jailhouse primarily serves as her workspace, she hopes to join the First Friday circuit in the warmer months, she said. “It’s super small in here, so, when I can’t be like, ‘hang out on the patio,’ I get a little nervous,” she said. “But this summer, I definitely want to. I know [the historical society is] really challenged. Hopefully, come summer, me being here can help in some way. I don’t know what’s next for them, but I look forward to bringing energy.”

As for Uhl, her work has taken her in several directions. She calls herself an artist, activist and joy evangelist, and her work is the tangible overlap of the three. You may have seen her current show at Bonfire Coffee, which currently features her Kindness series.
“I think I’m itching — like, what is this kindness dream? Or the bigger question is, what do I have to offer from a service or a cause perspective that feels most effective? That’s my active discovery right now, my active question. So I do keep coming back to how that can translate,” she said.

Turning art into action
When it comes to her activism, what she offers has translated to fundraising dollars. At last year’s Mountain Fair, in keeping with the festival’s water theme, Uhl painted a mural she called “For the Love of Water.” Several smaller boards, each of which told its own story about water ecology, comprised the larger work, which she created live in front of onlookers at the fair. She sold the boards individually, and every dollar went to the Roaring Fork Conservancy.

“I didn’t want to have a booth and sell art; I wanted to make art,” Uhl said of last year’s Mountain Fair experience. “I made this whole thing with the boards and was able to raise $3,500 for [Roaring Fork Conservancy]. It was super vulnerable for me — I’m a watercolorist, so to paint on wood in front of 25,000 people was a stretch for me, but I was stoked on it.”

It wouldn’t be her only project of that nature. After collaborating with Roaring Fork Conservancy, Uhl trekked to Denver to create another mural of a similar vein for Outdoor Retailer, the largest outdoor recreation conference in the country. Traditionally, the event occured in Salt Lake City, but several of the organizers and leading participating brands — such as Patagonia — lobbied to relocate in protest of Utah’s perceived anti-public lands policies, Uhl said. “Denver won the show,” she said, which presented an opportunity for her to participate.

“The whole mural was about the Continental Divide Wilderness Bill, which is a bill that the Senate and the House have now introduced multiple times to expand wilderness in the Front Range,” she said. She sold 36 of the 40 boards from that project, raising $6,300 for Conservation Colorado.

“I’m really proud of this work,” Uhl said. “It’s entertainment, it’s advocacy and it’s fundraising all kind of lumped around something I’m really passionate about.”

Most of her activism centers around environmental protection. All of her work centers on community and connectivity.

“It’s a lot less making paintings and a lot more making relationships,” Uhl said. “I feel like I’ve been able to harness a lot of the different work I’ve done before to do what I do now. But I’m at the point now where I’m really excited to bust out of what’s familiar and easy — stop just calling fiends who already care what I care about.”

Perhaps that journey will take her into at-risk communities, working with youth organizations. Or perhaps not — she’s not boxing herself into any corners, but she is definitely exploring them, she said.

“I don’t know the population yet, but I’m excited to broaden. I do feel like I’m holding the end of a magic carpet and letting it go where it’s going to go, but I don’t think that it’s just random; I think it’s born out of having a clear vision that I want to have this kind of impact,” Uhl said of her future plans. “The other thing I want to manifest into my year is some book projects — a kids book or a visual part of a poem book, something like that.”

A lot of her recent intention setting came from her travels earlier in the year, where she partook in a Subaru-sponsored workshop for exactly that. “They hired 12 creative female entrepreneurs, and we took a road trip to Marfa, Texas. It was amazing,” she said of the moderated discussions around crafting dreams and managing the logistics around achieving them.

For Uhl, that was a breath of fresh air. “I was a pro cyclist for 10 years,” she said. “And I feel like I’m still in recovery of how goal oriented I was in that time. Life is a lot more dynamic, so I’ve shifted from goal setting for my career to intention setting, which loosens the grip.”

No matter where her work takes her, though, Carbondale is home. “This is really the place that makes me feel most alive, so that puts me in a good place to do good work in the world,” she said. It’s appropriate, then, that her present and future are stationed in the town’s history — and a little ironic, since Uhl feels so freed by working in a jail.