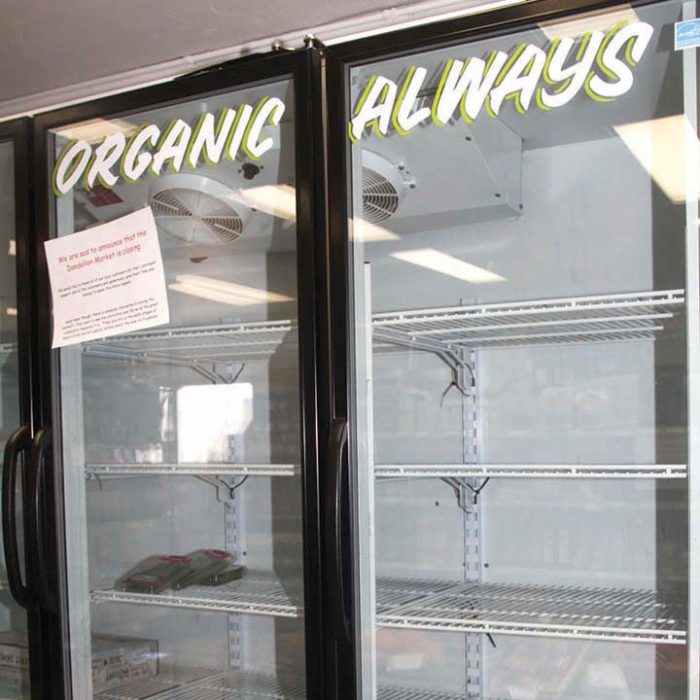 By the time you read this, the Dandelion Market may have already closed for good. If not, better get there fast to stock up on what’s left.

“Things are flying off the shelves,” said Board Member Erica Sparhawk, who also serves as a town trustee and works as the program director for Clean Energy Economy for the Region (CLEER). There was no final sale, as that would be self defeating in reaching the Carbondale Community Food Cooperative’s final goal, which is to continue repaying debts to vendors.

“We need all the money we can get,” Sparhawk said. “It’s all going to go pay off our debts. We won’t be able to pay off everything, but we’re working with an attorney to figure that out.”

Ultimately, she said, the market was not bringing in enough revenue to meet its financial obligations and did not have enough volunteers who could reliably work consistent shifts to keep it operating — but that’s not a critique of the volunteers.

“We’ve got a lot of people working two jobs or they’re already volunteering for other causes,” Sparhawk said. “Most of us are living here because we enjoy outdoor activities and we need balance, so the hope that we could run a whole store off 70-percent volunteer labor — that’s really optimistic. If nobody had anything else to do — no other organizations looking for help — then it would work.”

While certainly many members are sad to see the market go, it doesn’t come as a surprise. On Feb. 7, members faced a decision regarding dissolution, and at that time, they voted against it. A few volunteers agreed to take on leadership roles regarding marketing and operations and there was talk of restructuring the co-op as a nonprofit entity.

“People kept it alive,” Sparhawk said of that meeting. Ultimately, however, it wasn’t enough. “We can’t pay for product on the shelf right now, that’s basically it,” she said. And management refused to continue any purchasing that meant accruing additional debt.

Though the Dandelion Market will be no more, that doesn’t mean Carbondale has to go without a local grocery scene. There is an interested buyer that’s hoping to open a new market, though negotiations are pending so the identity of said buyer is still anonymous.

“We have someone interested in coming in and buying our equipment and our inventory,” Sparhawk said, which will make repayment efforts easier for the co-op. But there are several logistics that need to be worked out before anything becomes official.

“If they want to stay in that location, they’ll need to renegotiate that lease,” Sparhawk said, in addition to securing the required licenses. “Bob Schultz thinks they should call it ‘The Phoenix,’” she added with a laugh.

Potential buyers aren’t alone with their need to work out logistics; while the Dandelion Market is closing or already closed, decisions still need to be made regarding the future of the co-op as an organization. “We have a variety of things to get figured out,” Sparhawk said. “What is the process that needs to be followed? If it does need to be voted on by members, then we’ll be convening another meeting. I think the cooperative model has been tough.”