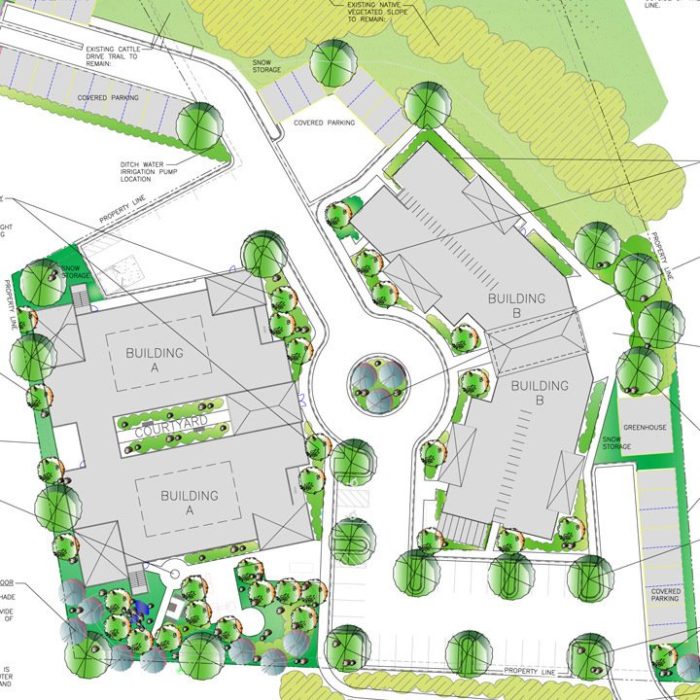 After numerous setbacks and hurdles, the Sopris Lodge project obtained most of the necessary approvals needed to move forward at the Carbondale Board of Trustees meeting Feb. 27.

“It’s been over three years since we originally started working on this project and we came really close to throwing in the towel a few times,” Project Manager Terry Claassen said. “It’s been a very challenging but we think will be very rewarding opportunity.”

The 78-unit assisted living and memory care facility is slated for a plot of land formerly owned by the Nieslanik family and situated past the end of Second Street on the north side of the Rio Grande Trail.

Park it
The biggest hang up prior to the Planning and Zoning Commission’s Jan. 25 review of the proposal was parking. Rather than grant an exemption, the Town opted to pursue a change to the requirements themselves under the Unified Development Code.

“The existing standards seem to require too much parking,” explained Town Planner Janet Buck. “In our old code, we had very limited parking requirements. With the UDC now for every use we have a parking standard, and we haven’t tested them all out.”

The Town researched standards in other communities, making use of an extensive survey put together by the City of Glenwood Springs. Based on that, staff concluded — and P&Z agreed — that a space per independent living unit, one space per three beds of assisted living and memory care and one space per employee at maximum staffing ought to be enough.

Trustee Luis Yllanes expressed concerns that snow removal might compromise the spaces available while Trustee Marty Silverstein was worried about guest and visitor parking, but Buck assured them it was all factored in.

“There’s a certain fluidness to it,” she said.

That aspect passed unanimously, and then it was on to the main event.

Getting there
Access was the main question as trustees weighed a comprehensive plan amendment, rezoning and major site plan review for the project, and has long been a challenge for the development.

Indeed, a final agreement with the Roaring Fork Transportation Authority is pending.

“That has stopped projects in their tracks,” Trustee Heather Henry quipped.

The design does allow for another access route if the main entrance were ever cut off. Still, although it will host a public trail in the interim, the narrow strip of land along the steep hillside between town and the floodplain would be extremely costly to fully develop.

As such, the development is expected to increase traffic on Second Street and necessitate improvements in turn. The solution favored by Public Works Director Kevin Schorzman was simply to install a sidewalk along the east side of the block rather than try to widen the street itself.

“The improvements when you widen a road tend to increase speeds,” he noted. “People tend to drive as fast as they feel comfortable.”

Trustee Ben Bohmfalk wasn’t entirely sold on that philosophy, and questioned the somewhat circuitous sidewalk route designed to meet the Rio Grande Trail away from the road intersection and avoid cutting down some mature trees.

“It just seems like the weirdest road design I’ve seen in the Town of Carbondale,” he said.

He was countered by Trustee Frosty Merriott, who was opposed to any tree removal.

Mayor Dan Richardson, for his part, was mostly curious whether the street would need improvements soon, anyway.

“Based on the condition, I don’t see it being in the next five years,” Schorzman responded. “10 to 20ish.”

Close to home
About halfway through the meeting, Claussen had a chance to touted the features of the development and the benefits of having it nearby.
“It’s right here in downtown, and there’s so many synergistic opportunities,” he said.

The local applicant, Pacifica Senior Living RE Fund, LLC, partnered with Wellage Senior Living for the project — and Claussen emphasized that Peregrine Assisted Living is not involved at this point. The primary market area, he said is a 50 mile radius around Carbondale that includes Rifle, Aspen, Eagle and Paonia.

“The growth pattern for seniors in our market is significantly higher,” he said. “We’re so far behind the curve it’s ridiculous and it’s going to get exponentially worse.”

He characterized the lodge as a contemporary design in a tranquil setting where tenants could “age gracefully and wonderfully and with their friends.”

“Right now, there aren’t a lot of options,” he observed. “To stay in your house is not affordable. You get tremendous economies of scale when you’re living in a larger community.”

Public comments on the project were minimal and either positive or neutral. The plans for an on site greenhouse and community partnerships seemed to impress the board, but there were still some concerns.

“I would hate to see this become a project just for upper valley residents with more money,” Silverstein said. “I think a mix would be a healthy thing.”

With a seven year waiting list at Crystal Meadows, though, no one on the board had a solution to enforce a local restriction in the face of demand.
“I think that you’ve gotta let the market drive part of this, if not all of it,” Merriott said. “I’m only about ten years away from this myself.”

Staff also addressed concerns about what might happen to the property if it were sold or changed to “a frat house or dormitory or whatever,” as Town Attorney Mark Hamilton put it.

Explained Planner John Leybourne, “the special use permit is tied with the use itself. If they have any change of ownership or change of use it would go away which means we’d have to review what the new use would be.”

In the end, trustees unanimously agreed to rezone the property to residential high density, assigned it to single designation on the future land use map, make arrangements for improvements to a town ditch through the site, and approve the major site plan.

If all goes as planned, construction should start this summer with the first residents moving in sometime in mid to late 2019.