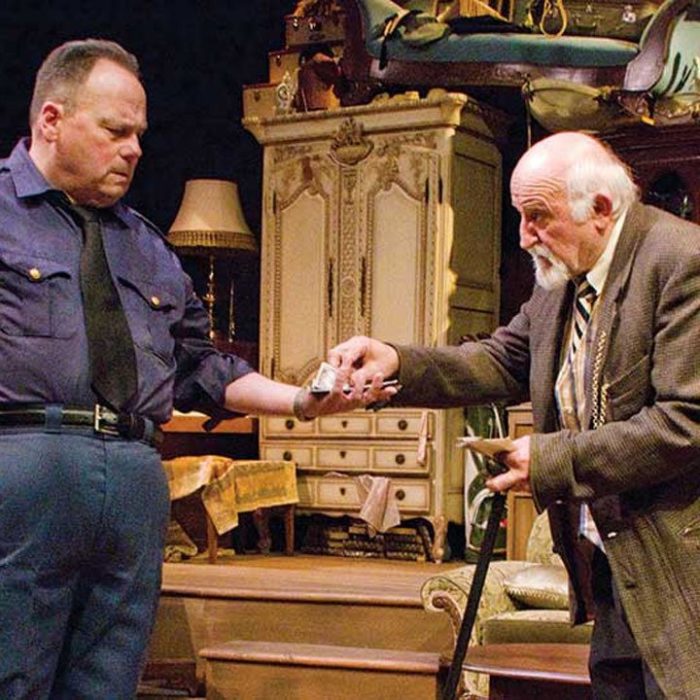 “The Price” has been the least staged of playwright Arthur Miller’s plays. The current production at Thunder River Theatre Company (TRTC) reveals it as Miller’s most underrated play.

TRTC’s production is a powerhouse, as good as any live theatre this reviewer has seen. (Reviewer’s Note: While living in San Francisco, I regularly attended both ACT and the Magic Theatre, where Pulitzer-winning playwright Sam Shepard premiered many of his plays. My standards can be unreasonably high.)

As Victor Franz, TRTC veteran Owen O’Farrell turns in a winning performance. He’s a cop who has failed to find meaning in 16 years of walking the beat, but who also fails to muster the energy needed to fill out his retirement papers. He failed to finish college because he chose to support his father, a casualty of the Depression.

Victor’s brother Walter, in contrast, chose to walk out on dad. Ever since, Victor has nurtured a righteous anger and a simmering resentment against Walter, who finished college, became a surgeon and is now a financial success.

The action takes place in an attic, where Victor has asked Walter to come to help dispose of their father’s furniture. It’s a long-avoided task that has suddenly become urgent due to the city’s plans to demolish the old brownstone.

Bob Moore, who previously appeared in TRTC’s productions of The Gin Game and Freud’s Last Session, provides comic relief and sage commentary as Gregory Solomon, the 89-year-old furniture dealer who shows up to set a price on dad’s worldly goods.

Production designer Sean Jeffries’ stage is piled high with good, if unfashionable furniture (graciously loaned to TRTC by our local Habitat for Humanity ReStore). A handsome, powder-blue settee perches at an angle atop a wardrobe and glass-fronted highboy, prompting one to wonder whether it will fall. Will it crash down to reach an angle of repose during the play?

That’s precisely the dilemma faced by the brothers—and by Miller, who left his own brother to support the family while he sought dramatic fame and fortune. Exploring themes that define much of his work, Miller asks what sons owe fathers, what brothers owe fathers, what the country owes those who work hard and follow the rules.

As Victor puts it, there’s “a price to be paid” for the choices each brother has made, and their estrangement represents only part of it. Each brother has fashioned an identity in reaction to his father: Walter has achieved success and fortune, but paid a price through divorce and a lack of human relationships. Victor’s wife Esther has stayed with him, despite her disappointments and frustrations, and the couple faces a threadbare future.

Trary Maddalone turns in a nuanced performance as the perhaps-alcoholic Esther, even though Miller’s script didn’t give her much to work with. It’s not easy to maintain the audience’s sympathy while shouting, “I want money!” but Maddalone pulls it off.

As Walter, Jeff Carlson adds depth and pathos to Victor’s distemper. Walter enters after the intermission—after a long, conspicuous absence—to reveal that dad’s financial failure wasn’t what it seemed to be. Victor’s sound and fury doesn’t signify nothing. It’s a big something, but not what it initially seemed to be. Victor could have made other choices.

Walter pleads for reunion, saying that the two damaged brothers are like two severed halves that would together make up a whole person.

Walter even offers Victor a job that might give him another chance at meaningful work, what would now be called an encore career.

But this is a tragedy, and Victor holds his resentment dear. He can’t let go of his anger, not for his brother, his wife, not even to redeem the price he has paid in his own life.

In staging The Price, Thunder River again proves itself worthy of the statewide Henry Awards it has won for outstanding regional theatre. Corey Simpson’s direction is flawless, and TRTC puts not a foot wrong. Five stars from this jaded and sometimes stingy reviewer.

Go see it. The Price deserves to be playing to sold-out houses through March 10.