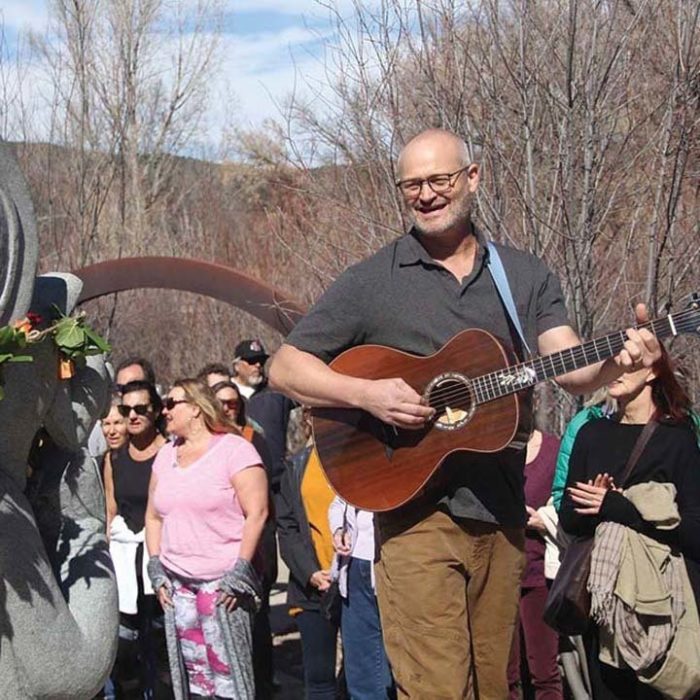 The opening ceremony for True Nature Healing Center’s kiva and spa last weekend may be over, but the experience still lingers for many of those who participated in the 24-hour event that included chanting, singing, sage smudging, crystal programming and — at least for co-founders Deva and Eaden Shantay — the occasional catnap.

“We’ve had many people connect with us post the event, and they’ve really felt that chant continuing,” Eaden said. “I got a call this morning from a community member who was just making breakfast, and she was hearing the chant. And that’s the beauty of an extended chant; it penetrates deeply, that repetition.”

The kiva has been years in the making. “Probably about three years ago, we realized that we just needed another space that was primarily dedicated to events,” Shantay said, noting that True Nature’s yoga classes were regularly full, and the couple did not want special events to conflict with the center’s weekly schedule.

“My wife is an intuitive, so she channels guides. We were connecting with a guide, which we often do, and this one guide came in and we were asking about the future of True Nature and what we really needed to bring the project together,” Shantay said. “What he said was, ‘You need a ceremonial space in the center of the peace garden that marries heaven and earth.’”

Thus, the idea of the kiva was born. It was about another year before the couple decided to move forward with the project, but when they did, they ensured the space reflected that marriage between heaven and earth: the space itself is underground, beneath the peace garden, but maintains a living roof and a skylight.

“We put in that portal here so that even though you’re in the womb, you’re connected to the infinite sky,” Shantay said.

Directions play a central role in many spiritualities, and that’s true of the Native American traditions with which the Shantays feel so connected, Eaden said. That’s represented in the kiva, which showcases four crystals that indicate east, west, north and south. Before settling in for the night’s fuller chanting, participants spent time honoring those directions and infusing the crystals with cleansing intentions.

“In the east, it’s about new beginnings, springtime. So it was about birthing this new building,” Shantay said. “You set your intention in the east and then bring action to it in the south and to the summertime; the seeds sprout and then they’re growing. And then into the west, it’s about change and transition. The north is often associated with the winter, the quiet contemplation and the wisdom of the elders.”

In the Native American tradition, there are actually seven directions, he said, which is where the skylight and the kiva being underground become symbolic. “Mother Earth is the fifth direction, Father Sky is the sixth direction and the seventh direction is all that is. So we brought that understanding together and then we sang an invocation chant.”

Of course, the weekend wasn’t all spent underground. Saturday afternoon started in the peace garden, singing and chanting around the Buddha and then Ganesha statues, throwing salt — a purifier, Shantay noted -— and smudging sage to release what doesn’t serve the property and invite light, healing energy, he said.

“I think it surpassed our expectations in terms of an opening. It felt like so many people were grateful for the space. It’s our town’s. And it’s Deva’s and my gift to the town,” he said, adding that the Shantays also hope to create an international consciousness destination with the expansion. Their first series teaching daily mindful practices begins March 15, right before the spring Equinox.