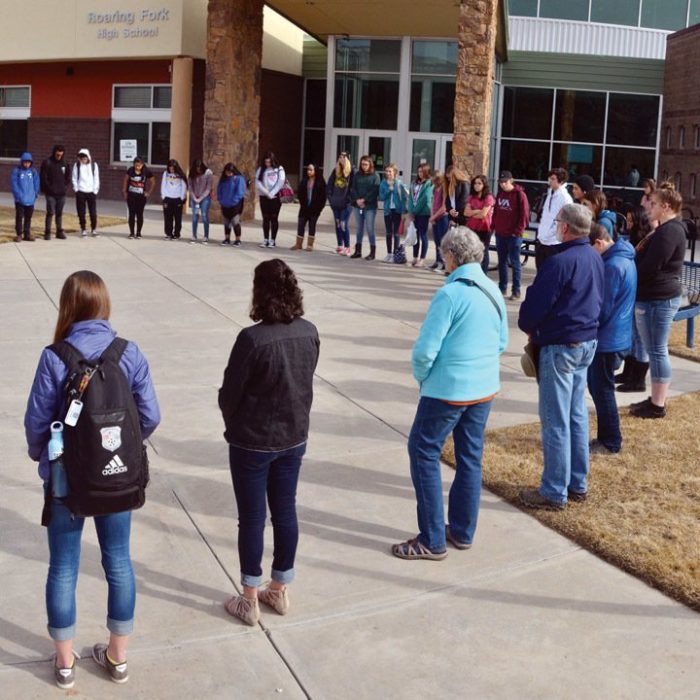 No signs. No slogans.

Roaring Fork High School’s participation in the National School Walkout on March 14 was a quiet affair.

While the whole student body shared 17 seconds of silence during a community meeting inside, around three dozen kids and a handful of grown-ups took it a step further by exiting the front doors and standing silently in a circle in front of the school.

One student voiced the benefits of silence: “Don’t speak, because there are those that will take you words and twist them to harm others.”

The students been warned by Roaring Fork School District that absences for protest would be counted as unexcused — and thus warrant a detention. Nevertheless, they persisted.

“I’m aware of the consequences but they won’t stop me,” sophomore Charlie Candela said afterwards.

While the Wednesday morning event was apparently an impromptu show of support with demonstrations around the country, Candela is part of a group called Carbondale United for School Safety (CUSS) that hopes to put on a bigger, more official event on April 20 (the anniversary of the Columbine shooting). Students have already obtained permission to alter the school schedule, and are hoping to involve other schools and the community at large.While gun violence has been the most talked about issue in the wake of the Parkland, Fla., school shooting, CUSS hopes to address a broader scope of issues including mental health and bullying.

“We want to feel safe in our school, but we don’t want to do exactly what Glenwood did,” Candela explained.

Meanwhile, it seemed that all those who participated in this week’s demonstration made their way back to the event in the auditeria, where Principal Brett Stringer acknowledged them.

“You are surrounded by love and support. I think that’s clear with the speakers today as well as the circle out front,” he said.

Ross Montessori School’s participation in the National School Walkout was actually arranged by staff, with most of the school participating.

In a letter to parents on March 8, Principal Sonya Hemmen gave them a chance to opt their students out or walk alongside them.

“I still do not have answers to this ongoing problem of school violence. And, like all of you, I have been watching news and hearing about planned and unplanned walk outs to protest this ongoing problem in our country. The most important two jobs all of us have in schools is to ensure the health and safety of all the children in our care,” she wrote.

And so, on March 14, most of the school donned grey and red and spent 17 minutes of silence along Lewie’s Lane before a couple of students gave speeches and the whole school joined together for “Light a Candle for Peace” — Ross’s unofficial anthem.