The long and winding road to fire chief 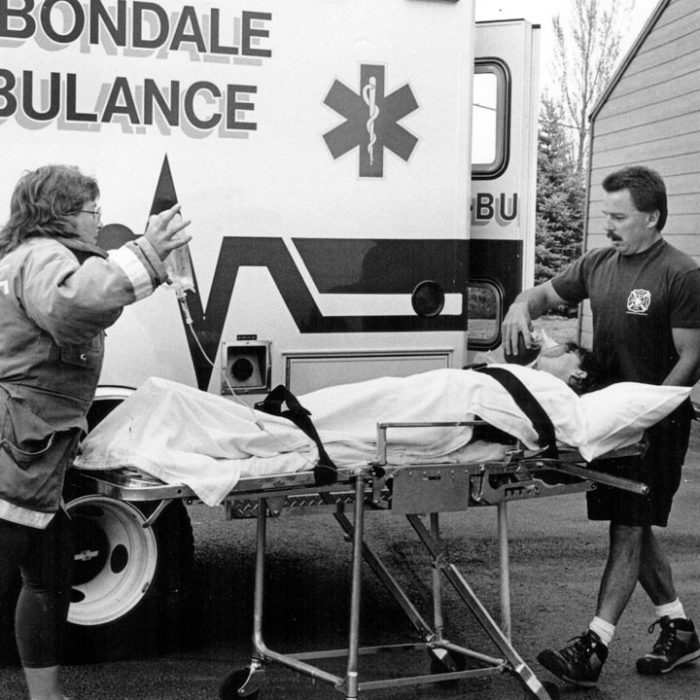 For Rob Goodwin, being on top means propping people up. That’s been his philosophy throughout his career with the Carbondale and Rural Fire Protection District, and now that he’s chief, it’s no different.

“There’s an old saying: ‘there’s no limit to what a person can do and what they can accomplish if they don’t care at all about who gets the credit’, and I really believe that,” Goodwin said almost shyly. “My favorite part of this is being able to enable people to succeed and run with stuff and feel like they really did something important. That gives me the most satisfaction.”

After all, he said, he’s been the benefactor of so much support while finding his own path.

“Years ago, I never really dreamed of being a fireman or anything like that,” he said. His father moved the family from Denver to the Roaring Fork Valley in 1977 to follow the construction money and after graduating from Roaring Fork High School, Rob, too, was working construction in Aspen.

“I remember I’d be driving home from work and there’d be a car wreck,” he said, noting that Highway 82 was only two lanes then. “And I’d get out and go to help, and I didn’t know anything. About the third time that happened — I’ll never forget it. I was coming home, and getting out and going, ‘Oh geez, this looks terrible.’ And I just didn’t know what to do. I was so frustrated. I went home and I told my wife, ‘That’s it. I’m never going to not know what to do again.’”

It was that incident that sparked Goodwin to sign up for Colorado Mountain College’s Emergency Medical Technicians (EMT) class. “Barb Bush was the instructor,” he recalled. “She’s the one that got me into this! Shortly after I started, I walked into class one day, and she walked up and had an application and she said, ‘You’re joining.’”

Goodwin began volunteering at the fire department in early 1987. He was immediately hooked, he said — or, rather, signed by mimicking a hook in his mouth. “It was like a calling. And I just kind of found it. It’s always been that way for me.”

Bush wasn’t the only one to propel Goodwin into the firefighting realm. He worked his way through the volunteer ranks before getting hired as assistant chief in 1992. “It was me and Ron — and we had a part-time office manager — and that was it.”

More than a quarter of a century later, Goodwin has stepped in for Ron Leach as chief, who retired from the role in February. “They’re big shoes to fill”, he said. “Ron Leach led this place for 37 years. I helped in my way, but he had the vision and leadership to bring this from a really small-town volunteer department — which was a good fire department — but he went with the changes and created change, which is hard to do. I think our communities owe him a real debt of gratitude for what he’s done, and I can’t thank him enough for what he’s done and for what he’s done for me.”

Goodwin gets a little emotional when he talks about the people with whom he’s worked so closely over the years. There was a time when he didn’t think he’d be able to return to the department after taking a five-year hiatus.

“Through the ’90s, of course, it all grew,” Goodwin said. “We did a few bond issues and built stations and the district expanded through [Leach’s] leadership. I did that for 17 years.”

At home, he and his wife were becoming empty nesters — and at one point, the nest included eight kids. “We had five kids together, plus we raised one of our nephews for about eight years,” Goodwin said. Eventually, two more extended family members joined the household for a few years. “I love kids,” he said. “They all grew up.”

The couple discussed what to do next. “My wife and I had always wanted to kind of do an adventure and own a business together,” he said. That opportunity arose in 2004, when Goodwin was still deputy chief. “We bought and started a real estate business.”

Over the next five years growing that business, Goodwin’s EMT certifications lapsed. “I had spent a lot of time and a lot of hours and a lot of years dedicated to this place doing that job, and I was probably a little fried,” he admitted. “I had always told myself and told other people I’m not going to come back until I miss it. And what I found was, I really missed it.”

The Goodwins sold their business in 2008, right before the economic crash that ignited the Great Recession. It was time to come back, Goodwin had decided. But first, he had some hoops to jump through in order to regain his certifications. And he had to wait for an opening at the department.

“I was so blessed to have the opportunity to come back. It’s rare that you stop doing something and then you get the chance to go back. I’m so grateful for that,” he said.

Now in his new role as chief, another career change isn’t likely; in fact, he’s already thinking about the future for the district. “Our challenge as a fire district and my challenge is to change as the times change and still be a modern, relevant fire department,” he said, adding that he knows those that comprise the department are up to the task.

“A lot of places have people that just do the job; we have men and women who care,” he said. Goodwin is among them. “It’s still a calling for me.”