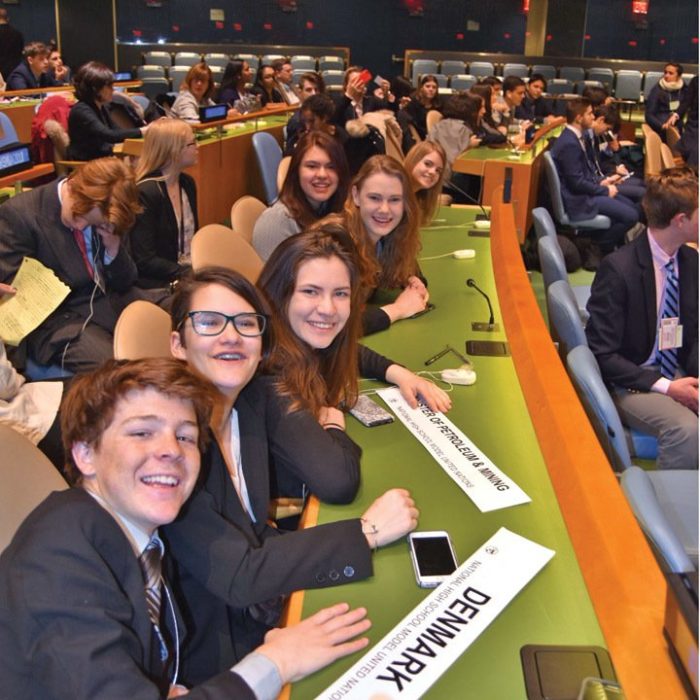 The Roaring Fork High School Model United Nations club came home from New York with a concrete victory: the students representing Cote d’ Ivoire — or the Ivory Coast in English — cosponsored a resolution regarding the protection and safety of journalists, and three of their proposals made it into the final draft.

“We went in as sponsors for that paper,” said Iliana Castillon, who shares the secretary general title with fellow senior Chelsey Serrano. It was her third year attending the Model UN Conference in New York, and she was pleasantly surprised to see her team’s suggestions make the final resolution. “People usually don’t listen to us if we’re representing a small country, but for this one, they did.”

For Matthew Wells, RFHS social studies teacher and Model UN advisor, that’s one of the goals of the trip. “The whole point of [the conference] is not to win; it’s to compromise, to find common ground. Certainly debate issues, but then find a way to solve a really complex global issue,” he said. “If they are able to pass a resolution that they are happy with, then you did your job. That’s what diplomacy is.”

In learning the finer points of what constitutes diplomacy, the students received help from a professional. In addition to Cote d’ Ivoire, some RFHS students served on crisis committees as Venezuelan President Nicolas Maduro’s cabinet while others represented Denmark. As such, Wells was able to arrange an informational session at the Permanent Mission of Denmark with a policy deputy — that kind of accessibility is one of the perks of attending the national conference in New York, he said. “It’s really cool for kids to see an actual diplomat and ask them questions. Those things are a nice element of this particular conference that make it worth it.”

“She gave us an overview of what she does and how she works and the challenges she faces,” Solana Teitler, an RFHS junior and two-time New York Conference veteran, said. “We went around and talked about what we were discussing in our committees. Those who were representing Denmark got some advice.”

Even those who weren’t representing Denmark still found the session insightful, Castillon said. “A lot of the questions tailored toward, ‘if a lot of my stuff won’t pass, what can I do’?”

The answer, according to the deputy, seemed rooted in patience and perspective. “[She] said you can come away with a lot of losses, but the one win is pretty powerful,” Castillon said. Teitler nodded with enthusiastic agreement.

That advice helped propel the students’ confidence, which in turn resulted in their proposals getting approved in the resolution regarding journalists’ safety. Castillon, for her part, is also the editor of the Roaring Fork Rampage.

For example, RFHS included language cautioning against the repeated use of radio-frequency-based devices from the same location by journalists in conflict areas. Such actions may result in real-life deaths of journalists and civilians alike when adversarial governments used the signal locations for attack targets. RFHS sought to have this cautionary practice become standard protocal for journalists.

“It’s really cool to see the level of discussion and debate that they’re working at and the issues they’re grappling with,” Wells said. “It goes against that stereotype that’s out there from time-to-time of apathetic, plugged-in and tuned-out high school kids,” he said, adding that the club meets at 7 a.m. Wednesdays because it’s one of the only times that doesn’t conflict with students’ other extracurricular obligations.

Model UN is one of the most popular clubs at the school. This year, Wells and two other adult supervisors were in charge of 30 students while in New York, where they ate together in Chinatown and visited the National September 11 Memorial and Museum. “That’s the biggest group I’ve ever taken,” he said. “It’s 8 percent of our school!”

That opportunity to explore the city is itself a draw for students. “I’ve been here my entire life — I don’t know much else,” Castillon said. In that sense, Model UN has expanded her perspective in several ways, she said: she’s navigated the city with a large degree of independence, and she’s argued diplomacy points from a stance other than that of an American.

“I’m going to miss going through those experiences with my peers,” the senior said.