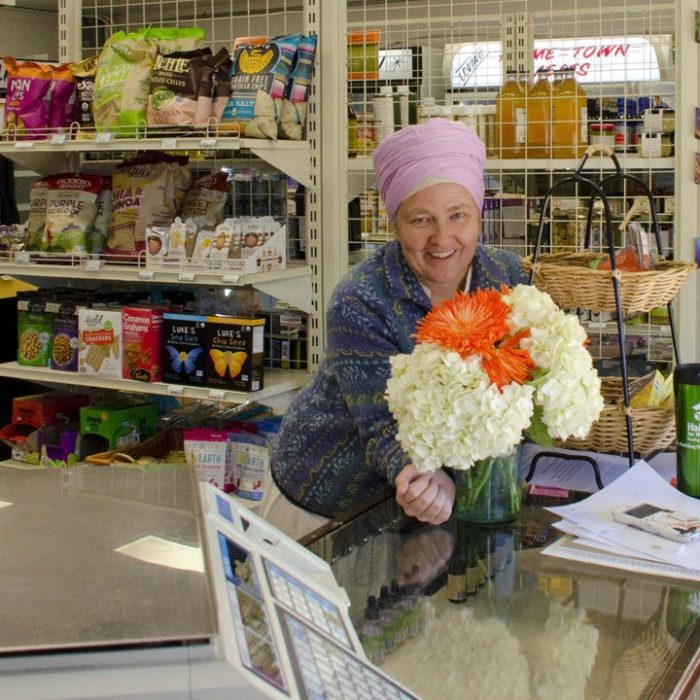 On March 23, Mana Foods opened its doors for its first official day of business. The shelves are stocked and the energy is vibrant. Mana means spiritual nourishment, and that’s exactly what the husband-and-wife team who co-own the store want to bring to the community — after all, the store is just one arm of their larger nonprofit ashram.

“It’s a guarantee that the food’s going to be organic, and then we’ll tend towards as much local as we can,” Sotantar Anderson, one of the owners, said about the shop’s inventory. “That’s the mission and intention.”

What’s happening in the store will be ever-evolving, Anderson said, from the available produce to her husband, Paramoop, deciding to feed shoppers with his culinary whims.

“It’ll shift all the time, because seasons shift. We encourage people to just come often and see what’s new,” she said. As for her husband’s cuisine, that will depend on his inspirations. For instance, on Tuesday afternoon, Mana Foods offered free soup to patrons.

“My husband’s a great cook,” Anderson said. “He has his own schedule, so it’s not like we say every Tuesday; we say, ‘Today, Paramoop wants to cook.’”

The best way to stay in the loop regarding the shop’s happenings? Social media, at least for now. In its first week being open, Mana Foods’ Facebook page already has almost 150 followers. “It’s easy to get it out that way,” Anderson said of whatever “it” may be, whether it’s a special discount for those in the know to ask or Paramoop’s next cuisine.

“Things have been great,” she said of the store’s opening. “People have been incredibly supportive, and we’re amazed.”