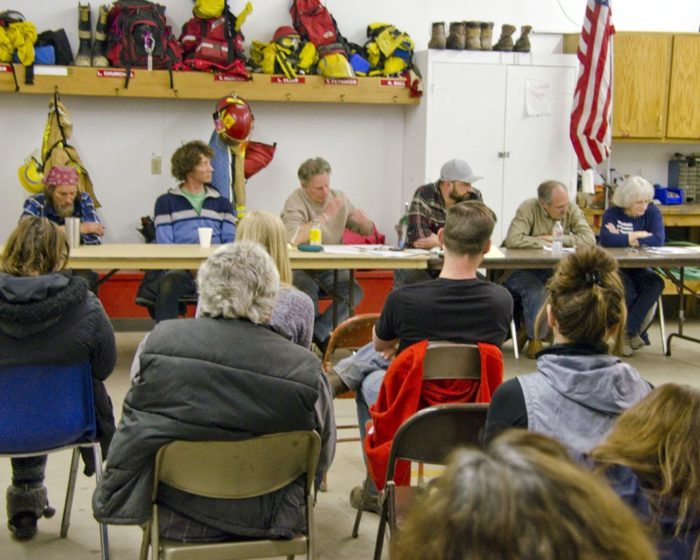 While fewer than 200 people are eligible to vote in the upcoming Marble trustee election, the issues discussed at a recent candidate forum have resonance for locals and visitors alike.

Indeed, numerous residents from outside city limits came out to the Marble Firehouse on March 21 to hear what prospective municipal leaders had to say.

There was one audience-posed question: a 13-year-old’s inquiry as to what the town could offer her age group.

While the event was, by all reports, rather more civil than council meetings are wont to be, it wasn’t entirely without tension. For starters, while nearly everyone was in agreement that the government ought not tell folks what to do on their own property, some were willing to blur that line with respect to short term rentals.

“I think the potential is there for everybody in this town to have a VRBO, and then we don’t have a community,” noted Yellico. “I find it sad that people that want to live and work here can’t.”

As such, he advocated a cap on the total number allowed.

Manus and Vinciguerra thought it would be enough to make sure everyone had a business license and paid lodging tax — some of which is already required by the state. Good (who owns a lodge in town) hoped to see universal use of smoke and carbon monoxide detectors.

At least one audience member thought that was too much to ask.

“I don’t want someone coming in to inspect my home. I think most of us that have short term rentals in town take good care of our guests,” he said. “We’re very independent, and that’s the way we like to be.”

That was a perfect segue into the next topic: regulation and enforcement. Specifically, the question of whether it might be time for some sort of dedicated law officer in the community given the distance to the Gunnison County Sheriff’s office.

“It’s pretty far fetched to have local law enforcement for our tiny town,” Vinciguerra responded. “Respect your neighbor. Talk to your neighbors when there’s a problem.”

It became clear, however, that folks were less concerned about theft or murder than speeding and parking violations.

Good felt that recently installed speed bumps (“sleeping policemen”) were already tackling the problem. Morande, for her part, figured an intergovernmental agreement might solve the criminal matters, but was worried about other infractions.

“We are known as not enforcing any of our codes,” she said. “That’s our big problem. We have to break that.”

Then there was a matter of the Marble Water Company, a private entity not owned by the town government.

“Water is the battle of the West, and it’s unfortunate that we have a battle going on between the Town and the Water Company,” Good noted. “The Town has had this revolving door of different mayors and council people, and the water company hasn’t been able to work positively with any of them.”

Gibbons said he’d like to see Marble own its own water system, while Morande hoped for better relations with the existing company.

“Our most precious resource is water. How we protect it is our responsibility,” she said. “We have to negotiate with them with respect, and they have to respect us back.”

The latest conflict slowly came into focus during Manus’s comments, which indicated that the Water Company had drilled several test wells between the city water supply and the nearby septic field for Slow Groovin’ BBQ, then increased the rates accordingly.

Vinciguerra, who owns Slow Groovin’, said any concerns had been addressed and seemed frustrated to still have it be an issue.

“We talked it into the ground with all positive outcomes,” he said. “Whatever the water company’s agenda is, it hasn’t been divulged to any of us. They seem to talk about me a lot, maybe they’ll get along with talking to me.”

In his parting comments, Vinciguerra took a moment to reflect on his first experience with the Marble government, applying for a liquor license almost a decade ago.

“There was tears, there was yelling. It was a very vibrant small town political atmosphere to say the least,” he recalled. “I walked out of that building telling myself I would never get involved in all that.”

The election takes place in-person on April 3, with the top vote-getter winning a four-year term and the next two filling two-year roles.