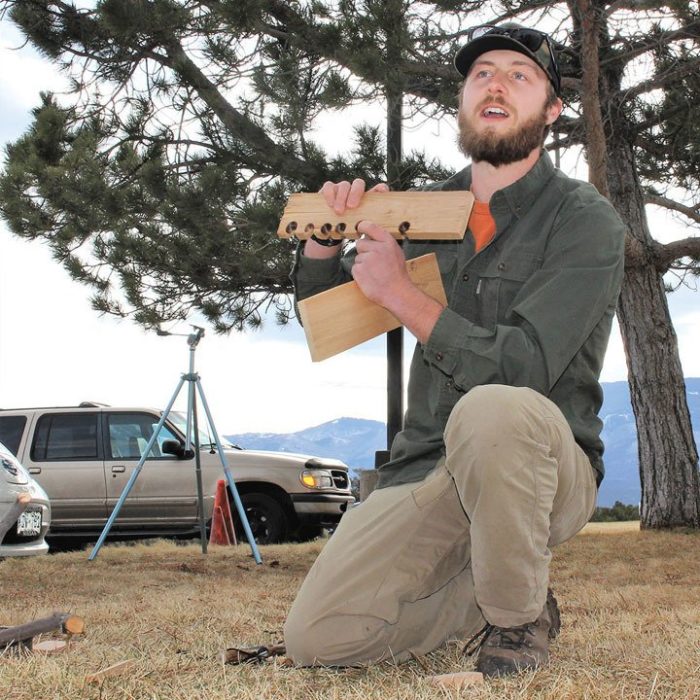 Just because Jeremy Wallace wants folks to know how to start a fire with a bow drill or forage for food doesn’t make him a prepper or an anarcho-primitivist.

“I think at the core it’s just trying to reconnect people with the land,” the Colorado Mountain College student said of fledgling organization Rewild Roaring Fork. “I want to be realistic and kind of work on these skills and enjoy them and someday live a lifestyle that’s as low-impact and outside as possible.”

Wallace, a 23-year-old from Cheyenne, Wyoming,

has been hooked on the outdoors since he went to Rocky Mountain National Park in high school. But while he enjoys many of the adrenaline sports that often take people into the backcountry, he’s looking for something beyond recreation.

“I want to be a participant — another creature in the landscape, feeling at home and belonging,” he explained.

He was attracted to Colorado Mountain College’s sustainability program, but it wasn’t until a recent semester at  Alderleaf Wilderness College in Washington that things really began to click.

“Being around a like-minded group of people was really educational and inspiring and made me want to keep it going,”

That, coupled with plenty of research, set him on the path to learning skills Western Society has ostensibly moved beyond: fire building, tool making, foraging, tracking and the like. He found that a core set of skills like patience, awareness and curiosity helped in almost every situation.

“It just kind of slows you down and makes you pay more attention,” he said.

Wallace doesn’t claim to be an expert on any of these subjects; he’s just trying to create a community of like-minded individuals.

“I’m really interested in this topic and I want to learn with other people,” he said.

Rewild Roaring Fork is officially a class project, but he hopes it will be freestanding and endure well beyond the end of the semester. He decided to start with a firemaking workshop because it’s something he’s fairly competent at that carries strong associations with pop culture portrayals of primitive survival — think of Tom Hanks’ enthusiasm in “Cast Away.” Next up may be foraging.

“Spring’s coming up, so it’s going to be prime season for some wild food and medicinal plants,” he said.

He’s well aware that many wild food gatherers are protective of their craft and secret spots, and plans to encourage moderation in the process.

“You have to scale how much you can take by the resources,” he explained. “I’d hate for people to get really jazzed about it and go annihilate the forest.”

He’s also not married to a purely pre-agricultural philosophy, and is open to exploring skills from the homesteading movement like canning and needlework. He’s also actively exploring permaculture through an internship with the Central Rocky Mountain Permaculture Institute.

“I think I enjoy nerding out on plants a lot,” he said. “I think it’s all about the mindset and the motivation to be working towards a simpler lifestyle.”

“There’s so much tech about technology saving us. I don’t see people really getting inspired by that,” he added. “The change I’ve seen comes from participating in the environment. That’s what makes people care about a place.”

For more information or to get involved, visit facebook.com/rewildroaringfork or email contact@wallace.photo.