All aboard the Brain Train 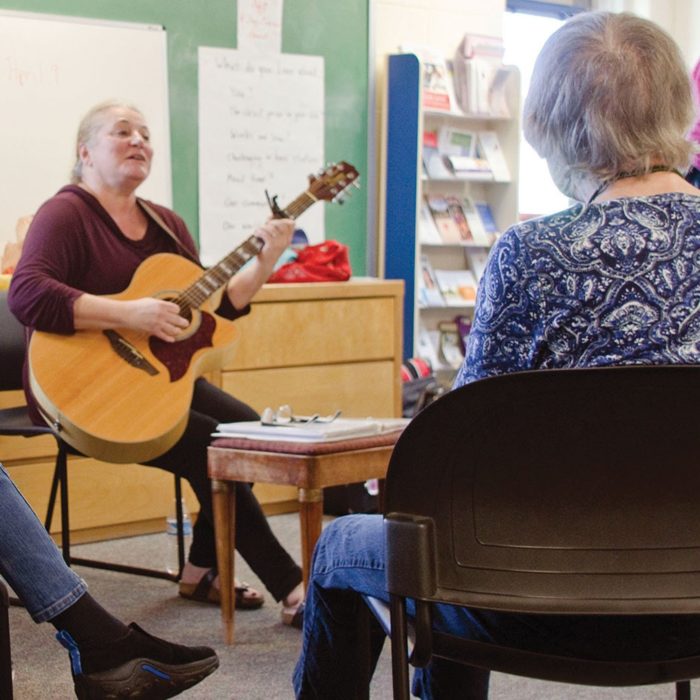 Every Monday and Wednesday at the Third Street Center, a group meets in the Senior Matters room for chair yoga, therapy-led discussions and art, singalongs and brain teasers. They’re all participants in Brain Train, the Roaring Fork Valley’s only program to support people with early memory loss.

“It’s so beautiful because they get so close and so comfortable,” Program Administrator Marti Barbour said, adding that memory-loss symptoms aren’t the only obstacles the program addresses. “Loneliness is a big part of getting older and getting more into yourself. This brings people out. They have friendships here, deep friendships.”

Now in its second year, Brain Train creates a safe environment for people with early memory loss to connect with themselves and others in similar situations through professionally led cognition training, artistic expression and, of course, fun.

“It’s not a drop-in program,” Barbour said. “We have an assessment that we invite people to and determine if it’s a good fit.”

That doesn’t mean the group dynamic remains permanent. It’s the unfortunate nature of early memory loss: it often progresses, and that means situations change, Barbour acknowledged. In fact, three participants will be leaving the program in June.

“This is a group for early memory loss. It’s not advanced Alzheimer’s; it’s not even necessarily Alzheimer’s. There [are] a lot of different diseases that bring on some memory loss,” she said. “It could be Parkinson’s; it could be a multitude of other things.”

Barbour took over for founder Diane Darling in November, when Brain Train went from being a program incubated by Senior Matters to a signature program offered through My Community Health Foundation (MCHF).

“She had always envisioned this being a program that would live long after she was gone,” Wagner said. “Diane was looking for an organization that would help make the program sustainable and to create growth within the program.”

That growth might mean additional locations in the future.

“We’ve been invited to have a Brain Train in Basalt when the new Mountain Family Health opens their new clinic,” Barbour said, though she added that she wants a full year of experience in her role before taking on that kind of expansion for the program. “Staffing and participants, it’s a big job for me. But once we get that down and show some consistency, [we] hope to expand in either adding an extra day [to the program] or another location.”

Right now, Barbour is spearheading awareness campaigns on two fronts: she’s launched a membership drive to increase the number of Brain Train participants, and she’s marketing a dementia-awareness for the general public.

“We’re doing a project called ‘I’m a Dementia Friend’ to create a dementia-friendly America, which is awesome,” she said. “We’re doing that to help bring awareness starting right here at the Third Street Center, then Carbondale, then the whole Valley.”

According to Dementia Friends USA, there are currently more than 13,000 registered “friends” in the country. The campaign encourages people to watch a short series of educational videos about recognizing dementia symptoms and actions that can contribute to making communities more accommodating (dementiafriendsusa.org/become-friend).

“We just want to be sensitive and aware that this is what’s happening,” Barbour said of her enthusiasm for Dementia Friends.

What’s happening, according to a recent report from Colorado’s Strategic Action Planning Group on Aging, is that the 65-and-older demographic is rapidly increasing in the state: Colorado ranked third in the country for its 29-percent increase in that demographic shift between 2010 and 2015, and projections estimate that more than 500,000 residents will join the 65-and-older population by 2030 —a 68-percent increase.

While there is no known cure, increasing age has been identified as the single-most risk factor for someone developing Alzheimer’s. The Alzheimer’s Association reports that one in nine people older than 65 in the United States has the degenerative disease.

The statistics don’t have to be the end of the story, and that’s where Brain Train comes in, Barbour said. “We just want people to give it a try,” she said of the membership drive. “We have people that waited a year because they were resistant, and now they’re like, ‘Whatever you do, don’t take Brain Train away from me.’”