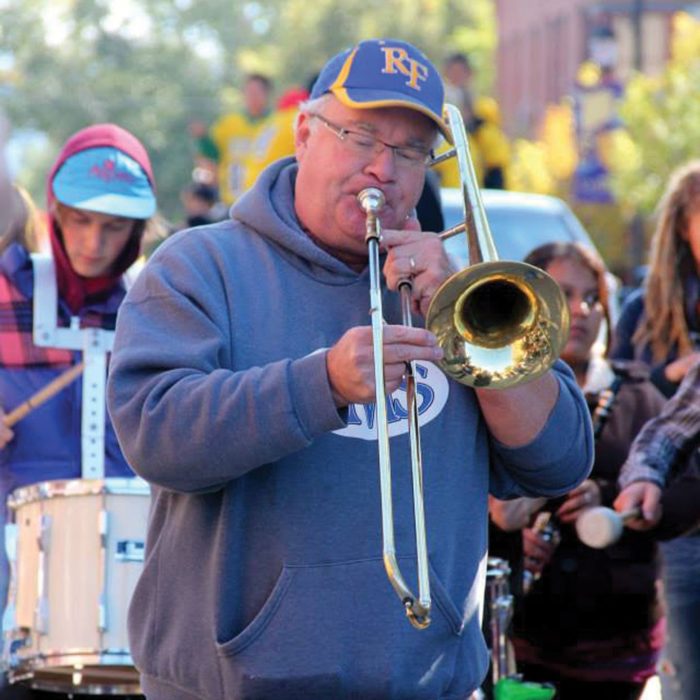 Mark Gray got his nickname a couple of years into his 17-year career in music education. The day after a group of students had collapsed a table by standing on it, he arrived in his classroom at Carbondale Middle School to see a kid doing the same thing — and got pretty cranky.

From that day on, he became known as “Mean Old Mr. Gray”. When even parents started using it, he sprung for a MOMG vanity plate.

“I thought it might keep new kids in line,” he explained.

But the kids are on to the fact that he’s only slightly curmudgeonly once caffeinated and is just now hitting 65 as he prepares to retire after 17 years with the district.

The mathematically inclined might wonder what he was up to before that.

All about that bass

Gray grew up a Cubs fan in Elgin, Illinois and started out in music the way many kids do.

“When I was in fifth grade, they looked at my mouth and handed me a cornet,” he explained.

Never content to stick with one instrument, he bought a bass in time for high school because a friend advised him he’d always be in demand.

“Everybody in my neighborhood had a guitar,” he noted.

Gray’s music teacher wasn’t much for rock and roll, though, so he dropped out of band to play on his own. While he was attending community college, a friend convinced him to try making a living as a musician. They founded a country-rock band called “Flaming Red” with just enough Eagles in their repertoire for weddings and Merle for the bars.

“We started playing and actually making money, but I didn’t like the lifestyle of living in hotel rooms and playing crazy gigs at night,” Gray recalled.

So he went back to school and graduated from North Illinois University at 28 as what you might call a musicologist. By 1980, the band was having trouble finding non-disco gigs in Chicago, so they moved to Summit County where they’d played for lift tickets before. Without the folk chops for apres ski, however, Gray got a job cleaning the movie theatre to keep the bills paid. He ended up as the director of the property management business that first hired him, and met us first wife and started his family in the process.

Then came an opportunity to manage the new Taco Bell in Glenwood Springs.

“Outside of getting me into this Valley, that was one of the stupidest decisions I ever made,” he noted.

While he liked working with the largely teen staff, he wasn’t particularly adept on the business side of things. He ended up fired, and though it only took him two days to find a gig at the Volkswagen dealership, he sensed something was missing. An employment test made it clear what that was: music.

Even at Taco Bell, Gray spent his late night listening to the radio, where he fell in love with Cajun culture  thanks to Susie Strode on KDNK. He also met the likes of Walt Smith and Howard Berkman. It was something of a golden age for local bands.

“Back then, everybody loved live music,” he recalled. “Now, if you get a gig, you’re basically playing for yourself.”

To make a living, though, Gray took a job teaching part time at Max’s Music in Glenwood, and was full time by the time it closed up shop.

“I wasn’t very good at selling stuff, but I could always educate people,” he said.

As such, he couldn’t help but participate in the founding of Glenwood Music. In 2001, however, he found himself pulled in another direction as some of his friends with the district tried to convince him to teach.

“Every school in the Valley was losing music teachers left and right,” he explained.

He was open to the idea, but was concerned about the possibility of teaching middle school — which is exactly where he ended up.

“It was so noisy that whole first day I couldn’t do anything,” he recalled.

Still, at the urging of coworkers and Principal Cliff Colia, he stuck it out for the first three years and really began to get the hang of it.

“After I figured out I wasn’t cranking out music majors and focused on teaching character and appreciation of beauty, it got a little easier,” he said. “When you’re mind doesn’t want to leave something, you’re in the presence of beauty. You find it every day in the band room — kids that have the light bulb go off. I learned never to give up on anybody.”

“You can do without science, English or math,” he added. “You can’t do without music.”

He also took the opportunity to share his other passions, like board games, with the kids. Soon, he was asked to teach at the high school, as well, and the middle school expanded to include fifth grade around the same time.

“That was where my lack of experience made it tough,” he said. “Bass players usually don’t lead. They’re side men that make everyone else sound good. With ages 10 to 18 in a few hours, you have to shift gears a lot.”

It also meant he got to oversee some students’ whole musical development, and that’s a big perk.

“It’s the world’s greatest job,” he said. “I’ve had a ball playing music with the kids.”

The beat goes on

Although he still loves his job, Gray thinks it’s time for a different approach.

“I felt like I wasn’t getting any better at it — just falling into habit,” he explained. “The district has grown up a lot. They’ve got all these younger, music educated people.”

He thinks Tami Wisely will make an excellent successor.

“The kids aren’t going to miss me for my teaching or music talent,” he noted. “They’ll miss me ‘cause we formed a relationship.”

“Mr. Gray was more than a music teacher; he taught me about life,” he said in a statement.

Added Lucas Pulver, “He ushered young people into the amazing realization that they could make music, and perhaps for more of his students than he realized, they were born to.”

And he’ll continue to do so, through work with Jazz Aspen and private lessons.

“I feel like it’s a step sideways,” he said. “It doesn’t feel like I’m leaving anything other than signing that contract to be back in August.”

Before that, he still has a few concerts to play with the kids — with some going away festivities planned for the JAS Student Bistro at 6:30 p.m. April 18 at Roaring Fork High School and at a Carbondale Middle School event in May. He’ll also continue to perform with acts like Electric Lemon and a new Cajun group.

“Musicians don’t retire; they just die,” he said. “I don’t want to sit on a beach and do nothing. I want to play.”