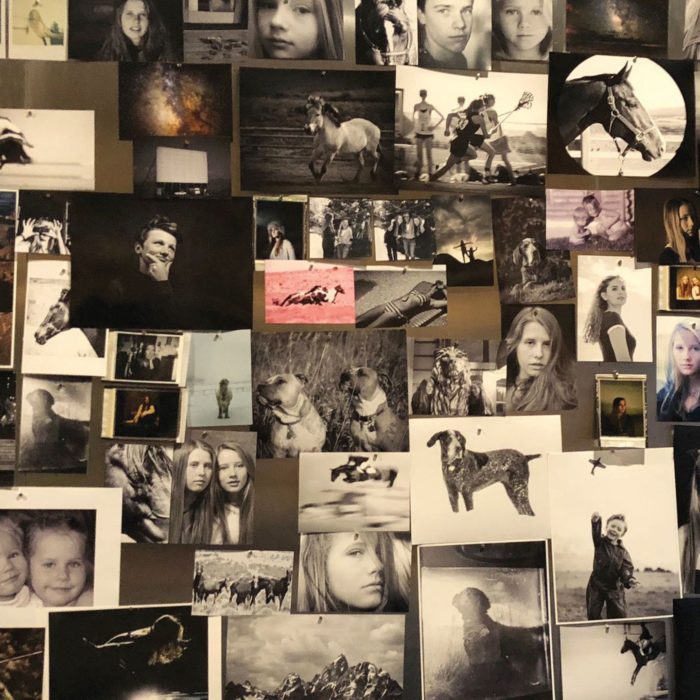 Summers Moore is finally ready to talk about her husband’s suicide, and she’s doing so the only way she knows how: through her art.

“I was just slapped,” she said of her husband’s 2007 death. For the next decade, she went into “mommy mode,” focusing on raising her two daughters, then five and eight. While she’d always dabbled in photography socially, she didn’t consider herself a professional artist at that time.

Then, a year or two later, she picked up a piece of charcoal for the first time. “I just started sketching,” she said. “I sketched and I sketched, and it was horrible — they were the worst sketches — but it felt so f-ing good. It took me somewhere else when I needed to go somewhere else.”

It sparked the beginning of a new chapter in Moore’s life. “I kind of locked myself in the basement for weeks and did my thing. That was a release,” she said. But through it all, her focus remained on her girls — both in life and through her camera lens. “I always had the camera on the babies. It’s always the girls; it’s always been them.”

It’s sort of fitting, then, that it was her daughters that inspired her most recent works at both The Art Base in Basalt and 5Point Film Festival in Carbondale.

“My daughter said something: ‘Mom, you never talk about dad,’” Moore recalled. “And I’m like, ‘I know. I know that, and I’m hoping not to.’ I couldn’t get over the suicide part of it to get to the life part. It just stunted me there.”

But, she knew, she couldn’t stay in that place. If anything, she owed her daughters a conversation, she conceded.

Moore, who serves on the boards of directors for The Art Base and 5Point, reached out to her network about her ideas. She wanted to do a film about it all: her husband’s suicide, her children and how her art helped her process and heal. “Ten Years Out” will premier in Sunday’s lineup during the festival, two days after what would have been her husband’s birthday.

Her reflection also inspired still works ranging from photography to sketches to acrylic abstracts. They came together in an exhibit simply called “Healing Process,” a retrospective collection looking back on the last 20 years of her life with an emphasis on the last 10. It opens Friday, April 13 at The Art Base and will remain until May 4.

“All the pieces are fitting now,” Moore said. “It’s all mending into the art. The film goes into the art and everything. It’s kind of an ode to my daughters saying, ‘I’m OK.’”

The 10-year mark is an important one for the artist. “I’m on all burners: art, photography, travel. I’m working out, I’m riding a mountain bike — all the things that normal people do that I didn’t do for 10 years. It was black and white versus the color I’m seeing now, so it’s cool,” Moore said.

She’s not slowing down. In fact, her to-do list is several pages long, and that’s just for the next few weeks. Her daughters, both of whom attend East Coast schools, are flying home for the events. She’s hosting a private art talk for members of The Art Base at her Missouri Heights studio. She’s still curating photography shows at the Aspen Chapel Gallery and is actively seeking canine models for her Hasseldogs book project.

“Art is a very healing, healing process. It stood me up, and now it’s shoving me off the edge, and I’m psyched,” Moore said.

Art opening: The Art Base,