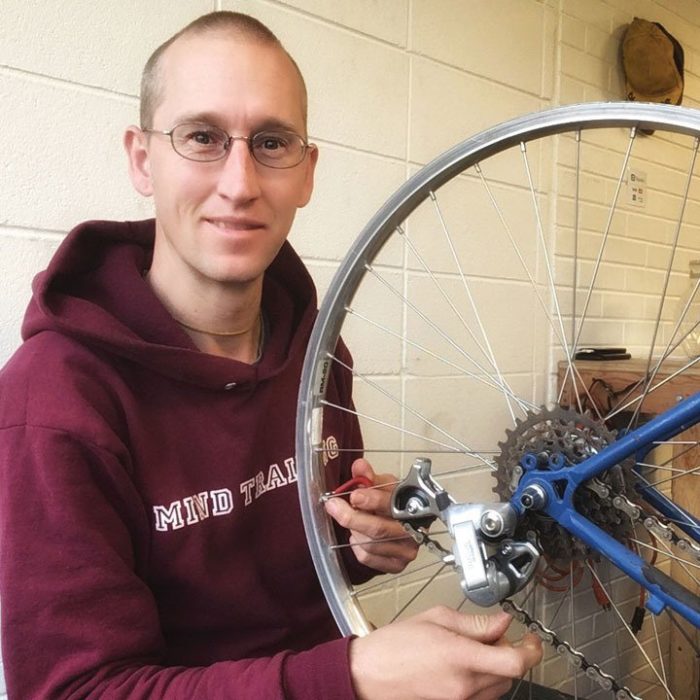 There are many ways to reduce suffering in the world, and building bikes may be one.

Aaron Taylor has been unwittingly carrying out The Way of Compassion’s mission statement with the Bonedale Bike Project since 2009, but now it’s official. Under the umbrella of the Carbondale nonprofit, the project has a new space, energy, and sense of purpose.

You can swing by Suite 34 at the Third Street Center (520 S. Third St.) from 1 to 7 p.m. Thursdays, 11 a.m. to 5 p.m. Sundays or make a special appointment, but the best way to get acquainted is an opening from 5 to 8 p.m. April 22. Just in time for Earth Day and 5Point, it will feature bike safety improvements like reflective taping and brainstorming sessions for future plans.

“We want to continue to try to grow with the community,” Taylor explained.

The Bike Project started out in the parking lot outside Back Door Consignment in 2009. Taylor had built a fleet of bikes from the Aspen Center for Environmental Studies using police auction parts and decided to apply those skills for others.

“It seems like discarded bicycles are a limitless resource,” he observed. “There are lots of creative people in other towns are doing the same thing. It’s a visual, lightweight, pretty safe thing to learn how to work on.”

Indeed, it seems like wins all around. Folks can get an inexpensive bike, learn mechanical skills, meet people and help others all through the same program. As long as people want to learn, they can be successful as volunteers overhauling bikes for sale or building their own ride from scratch.

“We overhaul bikes with people I’ve never worked with before in eight hours,” Taylor said. “It’s a real concrete real simple skill I can offer.”

Taylor is more of a teacher or conductor than hands-on mechanic.

“You’re learning how to do it, but you’re also the one allowing it to happen,” he explained.

At a recommended donation of $10 an hour, it’s an affordable alternative to a bike shop. But rather than being seen as a competitor, the project was embraced by Aloha Mountain Cyclery and ran out of its basement for years. It was a less than ideal location, however.

“It was cold, it was dark. No bathrooms. No running water,” Taylor noted.

Even so, when Laura Bartels and John Bruna of The Way of Compassion stopped in with their own bikes, they immediately realized it was a perfect fit. Taylor now works as The Way’s full time director, devoting about two days a week to the Bike Project — though he’d like to see it become its own job someday. The move was “a five year plan that got moved into six months because the appropriate space became available,” he explained.

Already, it’s been a huge success.

“We’ve never been busy in February, and since we moved in every day there’s been people there,” Taylor said.

The Bike Program plans to continue helping out with community events and organizing tuning days, expand partnerships seize any other opportunities that might happen by. While it already attracts a whole range of folks from serious mountain bikers to occasional commuters, Taylor hopes to do more to engage the Latino community and kids. In the end, he said, “it’s because of the community that it will succeed.”

For more information or to get involved, email aaron@wocompassion.org or call 340-8151.