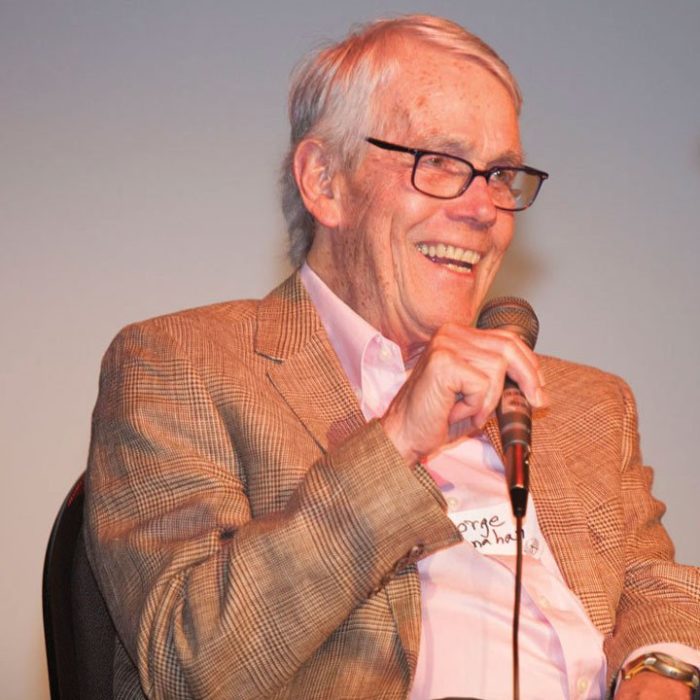 “I am a virus,” is how George Stranahan has described himself to others — an agent that disrupts a system, initiating a small modification that soon multiplies. He founded Carbondale Community School with the goal of provoking change in systems of education.

Stranahan was honored last week at Carbondale Community School’s Founders Day celebration, which also marked the school’s 20th anniversary. Michael Hayes, executive director of Compass, the parent organization of CCS, praised Stranahan for his commitment to “innovation and an irreverent attitude toward the status quo” throughout all of his endeavors, from the The Manaus Fund, Valley Settlement Project and Third Street Center to Flying Dog Brewery and Stranahan’s Whiskey.

Stranahan explained to the audience of over 100 people how he became interested in education:

“My own educational experiences [as a youth] were unpleasant for me. I did not like them. And they didn’t seem to like me… At 13 they sent me off to boarding school to learn Greek and Latin. And this was unpleasant too. Why the hell is childhood supposed to be unpleasant? That became my dream: making it pleasant.”

Stranahan founded the non-profit educational organization Compass in 1970 and Carbondale Community School in 1996. He established CCS as a charter school within the Roaring Fork School District, rather than an independent private school, because he liked the idea of this new school being part of a bigger system.

“We thought we could make change that hopefully everyone else could benefit from,” he said.

In addition to celebrating their founder, the purpose of last week’s event was to reflect upon the history and founding principles of CCS and, as retired CCS teacher Cathie Farrar explained, “use them as a gauge: Are we living up to our educational mission?”

The founding principles of CCS included a focus on experiential, hands-on learning; prioritizing children’s social-emotional development; integrating art into all aspects of the curriculum; and allowing children to take the lead in their own education.

As a CCS teacher for 17 years, Farrar believes that these basic principles have remained strong. CCS, she said, is still a place where teachers understand that, “the learner is far more important than the curriculum…the greatest gift we can give kids is a passion for learning.”

“So often people think that there’s a base of knowledge that has to be taught,” he added. “We take our clues from the kids.”

Laurel Tesoro, a parent of two CCS students, agreed that the heart of the Compass schools has continued from the time when she was a student at ACS. “It’s not quite as crazy as it was when I was at [Aspen’s] community school. It’s a little less seat-of-the-pants. But the basic concept, that sense of community, that everyone is responsible for themselves and for everyone else in the community – that remains.”

CCS teacher Ellen Huttenhower noted that while the four “pillars” of the school — social justice, community, responsibility, lifelong learning — remain strong as their guiding principles, actually attaining them is “nearly impossible.” Looking through the school’s archives she found letters from the ’70s which indicated that they were dealing with similar challenges back then as well.

“The ideals will never be attained,” Huttenhower said, “but they give us something to work toward.”

Michael McVoy, past board member of Compass and parent of ACS graduates, praised the community schools in terms of the long term impact they have had on their students.

“What’s most impressive to me is the diversity of where [ACS and CCS] kids go in their lives,” he said. “Everyone has gained the independence and confidence to go out and make their own change.”

In an email to The Sopris Sun after the event, Stranahan noted that the impact CCS has had on the school district as a whole is more limited.

“I think it would be fair to categorize the 20 year relationship of the school to the community as friendly yet aloof,” Stranahan wrote. “CCS is barely noticed except amongst its own families… Part of the motivation for the 20th anniversary celebration is to generate a more sharing community of schools within our valley.”

The Founder’s Day program ended with a plea to contribute to the school’s annual fund. As a public charter school, CCS is funded by tax dollars. However, in order to fund their full program for their 135 students, they set an annual fund goal of $48,000 for the 2017-18 school year.