‘Lightning Heart’ leaves a legacy in paint and memories 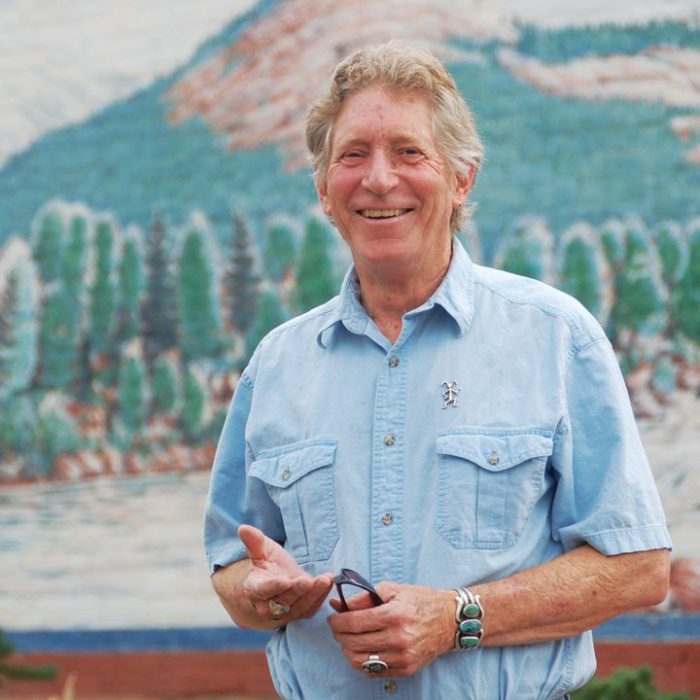 Some were offered a twig of fragrant sage; others a polished stone; some received a graphite sketch of a lone conifer on a cliff’s edge; for those gathering at the annual Carbondale Mountain Fair, it was gentle words for a safe weekend; and for all, artist Fred “Lightning Heart” Haberlein gifted public art — 140 murals that brighten streets, buildings and public halls in Carbondale and other mountain towns in Colorado, as well as Arizona, New Mexico, Oregon, New York and Quito, Ecuador.

Frederick Fitzjarrald Haberlein of No Name died April 16. He was 73.

Haberlein’s paintings and special gifts to friends new and old were representative of a spiritual man, full of generosity and deeply connected to the earth and nature, indigenous cultures, and his fellow human.

Meeting people was one of his favorite aspects about painting murals. He loved listening to their stories and fostering pride among community members about their home towns.

In a video spotlight for “The Valley Insider,” Haberlein said: “I love doing big local landscapes of where we live around here because it’s so miraculous. My public art, my mural art, does that same thing. It celebrates what’s best about that place.”

His most recognized public art in Carbondale is the 9-foot-by-48-foot “Interconnected Web of Life,” depicting a scene along the Crystal River, painted on the west side of the Dinkel Building. The mural originally was installed in 1989, but Haberlein spearheaded an effort in 2010 to raise donations for new paint to freshen up the color. Another large-scale picture, a 4-foot-by-16-foot landscape of the Crystal River in the fall, was installed at one of the Carbondale fire district buildings, and several of his murals and paintings adorn government hallways and public spaces in Glenwood Springs.

His paintings depict the wildlife, flora, fauna and geology of an area, as well as its cultural and social roots, including farm life, agricultural fields, irrigation ditches, flour mills and silos.

“He painted the most beautiful scenes of the West that will spark the imaginations of generations to come.… His loss impacts many diverse groups of communities,” said Gayle Mortell, who worked with arts organizations around the Valley. “I loved his art, and he will be remembered for his talent, but he was so much more. He was an extraordinary human.”

The Carbondale arts council, under the direction of Thomas Lawley, first commissioned Haberlein for a public painting on Main Street in the late 1980s. After learning about Haberlein’s spiritual beliefs, much of it rooted in Yaqui, Navajo and other indigenous peoples’ teachings, Lawley and the fair organizers invited him to lead an opening blessing at the Mountain Fair. He later shared the stage with Ute elders, Tibetan monks, Navajo members, and other spiritual and cultural leaders.

Many fair-goers also recall Haberlein keeping the gazebo crowd cool by spraying them with cold water during hot days.

“He’s the staple. He has been the glue that really has held so many years together. He shows up, and he sages us all, cleanses us, then blesses the fair. That’s going to be hard to replace,” Carbondale Arts Executive Director Amy Kimberly said.

Hablerlein was born December 7, 1944, and spent his early childhood years in Texas where his father was a petroleum engineer.  His parents’ disenchantment with corporate life and his father’s love for hunting, horses, geology and the outdoors, prompted the family to purchase and move to the Conejos Ranch in southern Colorado. It was the beginning of the younger Haberlein’s love for nature.

“Even as a little kid, I wanted to be out of the house as much as I could. I was 10 when we moved there. We had horses and animals and guest cabins so there was a lot that needed doing,” Haberlein explains in an interview for “Immigrant Stories” on KDNK.

Around that same age, he received his first set of oil paints.

“I knew I was going to be an artist from the time I was a little kid,” he says. “I thought I’d be a wildlife artist or a cowboy artist. I thought I’d do covers for Field & Stream.”

His art was encouraged throughout high school, where the nuns who taught class allowed Haberlein to create illustrations based on books he’d read instead of writing reports.

Haberlein graduated from Colorado State University with a degree in sculpture and anthropology and attended graduate school at Arizona State University, where he studied printmaking. During and after graduate school, Haberlein lived in Oracle, Ariz., working alongside other artists at Rancho Linda Vista. In 1984, Fred returned to Conejos Ranch and began painting murals in Colorado, the first of which was a Virgin Mary for his high school classmate Johnny Johnson, who was nearly killed in the Vietnam War.

Haberlein went on to complete 80 murals in the San Luis Valley before moving to Glenwood Springs with his wife, Teresa Platt, in 1988. For 18 years, Haberlein taught Drawing on the Right Side of the Brain at Colorado Mountain College.

One of his more recent projects was the repainting of a mural of Our Lady of Guadalupe in 2016 in Antonito, which he completed despite being diagnosed with esophageal cancer and undergoing treatment at the time.

Haberlein is survived by his wife, Teresa; brother, Bill; son, Kort, and daughter-in-law, Sandy; and two grandchildren, West and Ryan.

A celebration of his work and life is being planned for later this spring. In lieu of flowers, contributions can be made to the Fred Haberlein Documentary Fund at info@carbondalearts.com or by calling 963-1680.