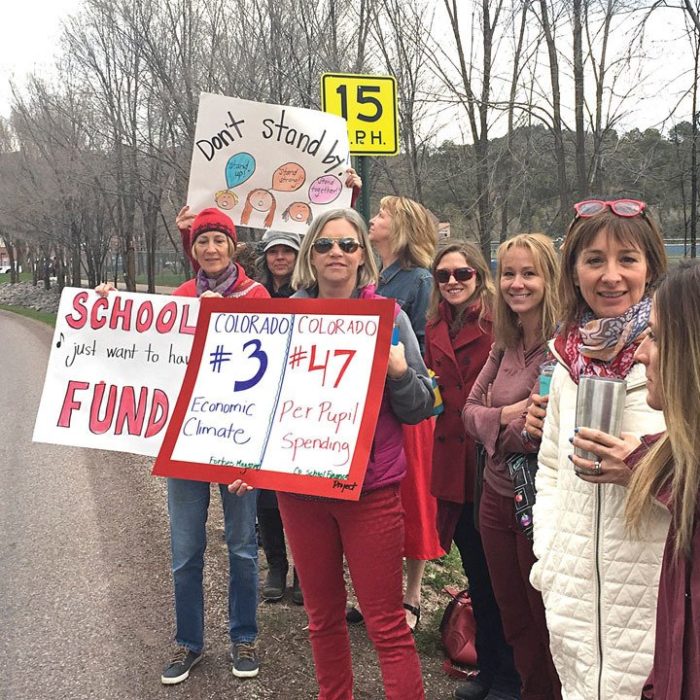 Carbondale teachers gathered on Snowmass Avenue on the morning of April 16 while others traveled to Denver on their own dime to act as advocates. Photo by Rhonda Tatham

On April 16, two Roaring Fork Valley teachers trekked to Denver, each on her own time and own dime, to join around 300 other public school teachers in delivering a message to the Colorado State Legislature: schools are underfunded and lawmakers need to ante up.

Lisa Dameron, who lives in Carbondale and teaches at Basalt Middle School, commented, “There’s a lot at stake: We spend $2700 less per pupil than the national average, and school funding has been declining” despite Amendment 23, which voters passed in 2000 to reverse a decade of budget cuts.

While ranking 43rd nationally in per-pupil spending, Colorado ranks 46th in teacher pay. Teachers make an average of $46,000 a year, according to the National Education Association figures. That puts Colorado dead last in terms of the competitiveness of teacher salaries, a recent study from the Education Law Center shows.

Jessica Crawford, who teaches at Crystal River Elementary, joined Dameron in taking personal time off to join teachers from around the state, wearing “red for ed” and rallying at the capitol. They sang Twisted Sister’s “we’re not going to take it anymore” and dropped in on legislators.

“The rally was really exciting, and the result speaks to the power of collective action,” Dameron commented. “We are underfunded by about $800 million due to some interesting math done by the legislature to work around Amendment 23, which says that funding has to increase. Because of recession and TABOR, that hasn’t happened.” SB 200, as approved by the House Education Committee, would restore $150 million of the missing Amendment 23 increase. It would also provide $222 more per pupil, $35 million for school safety, $30 million for rural schools and $225 million for PERA.

The Finance Committee’s amended version of SB 200 would allocate $225 million to PERA and eliminate proposed contribution increases that would have been paid by teachers, as well as state troopers, snow-plow drivers, judges and other state employees.

Crawford commented, “I felt it was important to fight SB200 because it was going to do nothing but hurt education and teachers. It is a small success that legislators passed amendments. It was great to hear they are not taking more out of teachers’ paychecks for PERA, and that the proposed retirement age was reduced from 65 to 60.”

Dameron spoke personally to State Representative Bob Rankin about both bills. “He was a good listener, and I was encouraged,” she said. “He was adamant that they put in a big chunk to pay down the debt on PERA” and he pointed out that because of local mill levy overrides, Colorado’s per-pupil spending isn’t as low as national statistics make it appear. (According to Education Week’s figures, Colorado ranks 42nd in per-pupil spending after adjusting for regional price differences.)

“Carbondale did pass a mill levy override, but poorer districts haven’t been able to do that,” Dameron noted. “That helps out people like us, but not everyone.” Some Colorado school districts, largely in the eastern part of the state, spend $20,000-plus per pupil. Some Front Range districts spend less than $10,000 per year.

As Crawford noted, “My future feels a little better, but our everyday expenses need help still. We need more funding for our students and we also need a livable salary. The fight today was a small step in the right direction, but there’s still a lot more to do.”

With the rally at the capitol, Colorado teachers have joined a wave of recent protests that have taken place in West Virginia, Oklahoma, Kentucky and Arizona to draw attention to what teachers’ unions see as a growing crisis in education.