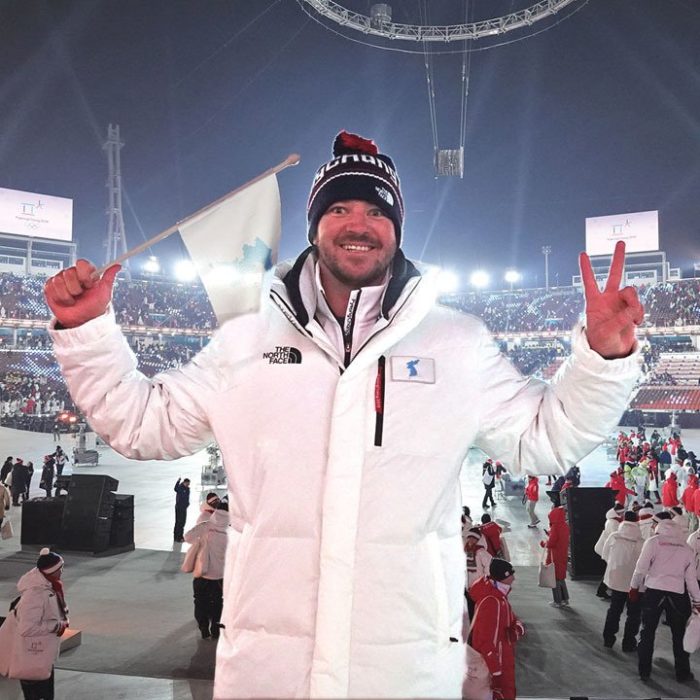 Peter Olenick, famed for being the first to land a double-flip in competitive skiing, is glad to be back in Carbondale again after a position coaching for the South Korean ski team for the 2018 Olympics. He’s been here and back again a lot, and he’s relishing the break.

Peter grew up with his two siblings, now retired athletes as well, in downtown Carbondale, graduating from CRMS in 2002. His father started the Red Rock Diner, shipping the building in two halves from Florida, and then starting diners in New Castle and Eagle. His mother was a nurse in the valley. Throughout his youth, Peter either spent his time at school, working in the diner, or skiing.

“The ski industry has changed a bit,” says Peter. The training for his professional career was simply hanging out with friends at the half-pipe. Olenick’s name exploded with his first X Games competition in 2004 after taking home a silver in slopestyle and a bronze in half-pipe. His accomplishments only grew, and he never felt anything but positivity from our small town. “Especially around the X Games or other competitions, I’d walk into a store or restaurant and feel the support,” he says.

Olenick’s career has been changing appropriately with the growth and evolution of freeskiing. As the sport has grown, so have the sponsorships, the crowds, the tricks, and the training, which is where Peter now makes his niche. Initially sidelined by a knee injury in 2010, he retired from being a professional athlete in 2013, and intuitively felt it to be the right move. Now he makes his living coaching at the Aspen Valley Ski Club and at the Olympic level. With the Games on their home turf, the South Koreans were looking to boost their prominence in freeskiing, a sport that has its roots in the U.S. They reached out to one of the best to train their athletes: Peter Olenick.

Training two weeks each month with his athletes, they’d travel the world to ski at different mountains, on different slopes and in unique parks, hitting a competition here and there along the way. “We really developed a bond. Professionally they were my athletes, but really they were my kids,” he said.

Though he didn’t step home too often these last few years, by the time the 2018 Olympics came, Olenick still felt that Roaring Fork Valley support: “Between Alex and Torin, this area had some great freeskiing representation in the Olympics.”

So what is next?

He’s thrilled to be home, attending 5Point this weekend and enjoying a change from the continual winter he has experienced for the last three years. Between golf rounds he’s already thinking about the next moves. South Korea wants him back to train their athletes for the Winter Olympics in Beijing in 2022. Following the pattern of wanting to up their game for their home competitions, he has an offer from the Chinese Olympic Team on the table as well.

But the last thought on his mind is the ideal. He has been working with some athletes in the Aspen Valley Ski Club that are graduating from that program soon. “They really have potential, and I could take them to the next level, to that international stage.”

Olenick envisions creating his own team, bringing in his South Korean athletes, local talent, and other athletes into a unique, elite freeski training program. Nowadays it takes that element of intentional training to make Olympic athletes, and it seems like Peter Olenick has got it to give.