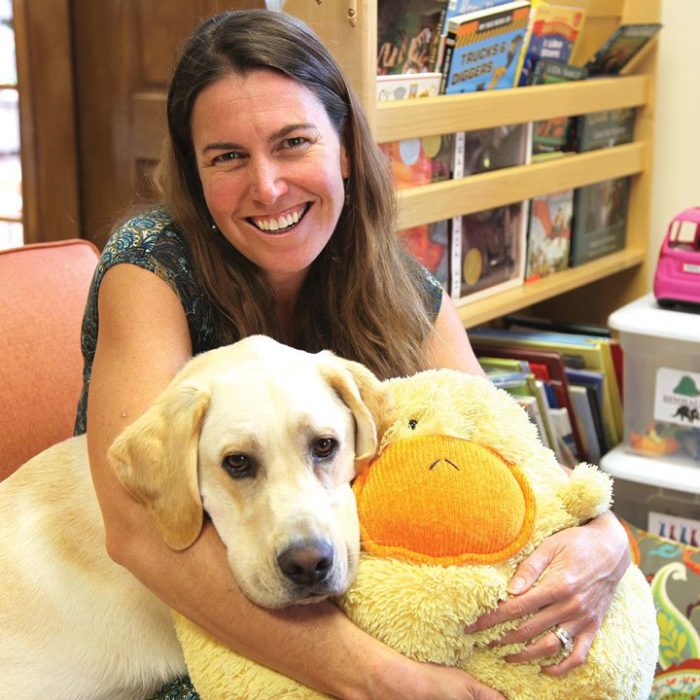 Frasier — the smiley facility dog at River Bridge Regional Center — was at the groomers. He had to appear in court the next day, where he had important foot-resting duties for the child testifying.

“Whenever a child has to testify or give a witness statement or an impact statement, Frasier will sit at their feet,” said Bridget Derkash, forensic interviewer and community outreach coordinator at River Bridge. It’s a seemingly small thing, but it can make a huge difference. “They’re having to look at their offender while they’re talking; it’s so intense,” Derkash continued, “but the kiddo has this dog at their feet, so it helps make that process less intimidating.”

At its core, that’s the entire mission of the center: making something terrible a little less so. The child advocacy center trains and staffs a multidisciplinary team of experts in their respective fields, all of whom are dedicated to ensuring families’ privacy and dignity through reporting alleged abuse. Lori Bennett, River Bridge’s victim advocate and administrative assistant, often finds herself turning on a white noise machine — she tends to prefer birds chirping — to diminish the risk of others overhearing a forensic interview. Derkash keeps toys in her desk. And of course, Frasier is usually on site.

“We’re really just trying to reduce anxiety and the stress of the kid after they’ve already experienced something really tough,” Derkash said. “When there’s an allegation of physical abuse or sexual abuse or a kid is a witness to violence, instead of having to go to a lot of different places — like the police department or the Department of Human Services or the district attorney’s office or even a hospital — they get to come here and have all those services in one spot.”

River Bridge Executive Director Blythe Chapman has a lot going on. The organization’s annual signature “Imagine” fundraiser, which requires its own year-round planning committee, is Saturday, April 28. Additionally, she’s overseeing a brick-and-mortar expansion for the center: Garfield County purchased another building just down the street for River Bridge to offer its non-forensic work.

“When they built this building 10 years ago, I don’t think there was any idea of what we would become,” Chapman said. “Since 2008, our numbers have increased for forensic interviews alone by 180 percent — that’s just forensic interviewing.” Last year, River Bridge conducted 223 forensic interviews. In 2008, that number was just 80.

Forensic interviews aren’t the only uptick the center has absorbed. “The medical program, the training program, community outreach… all of that has grown so much, and that leads to a lot more traffic,” Chapman explained.

The second building will help manage that increased traffic. It will also help ensure that forensic interviews truly happen one family at a time in the current location, which presently functions as the center’s headquarters. There are two doors, one at the front of the building and another on the side, to help manage foot traffic so that families never interact with nonessential staff or other happenings.

Bennett, for one, is looking forward to not having to utilize that side door as often once the new building is operational — hopefully by the end of the year.

Of the 16 child advocacy centers in the state, only three service the Western Slope, Derkash said. That means that while River Bridge sees families from Steamboat Springs or Leadville, many cases go through reporting avenues with much more sterile environments than the Teddy-bear-laden couches that line the rooms at River Bridge.

“The Department of Human Services is kind of similar to the DMV — they’ve got the glass window, and you’re like, ‘I’m here to talk about my child’s sexual abuse case,’ and then you go sit in the plastic chair and wait with all these other people who are there to receive services,” she said.

It feels a little counterintuitive to have a party in support of funding child abuse prevention and investigation, but that’s exactly what Imagine 6 is all about, and River Bridge staff looks forward to it every year.

“The more we talk about it, the more awareness there is, the better it’s going to be. And this is a great event to come to because it’s a big party,” Derkash said. “You can have fun, and it’s not this heavy, really intense thing.”

It’s also an opportunity for members of the multidisciplinary team — often in more serious roles — to mingle with community members in a social context, she added.

Indeed, it takes massive community support in order to even be able to have a successful event like the Imagine fundraisers, Chapman said, noting that this year, Ace Hardware in Carbondale donated $5,000 to join River Valley Ranch (which hosts the event at the Old Thompson Barn) as presenting sponsors.

“[That] is huge for us,” she said about the new sponsorship. “Every dollar that we raise goes directly toward providing direct services.”

What: Presentation to Roaring

What: An interactive event targeted to the children, youth, and families.