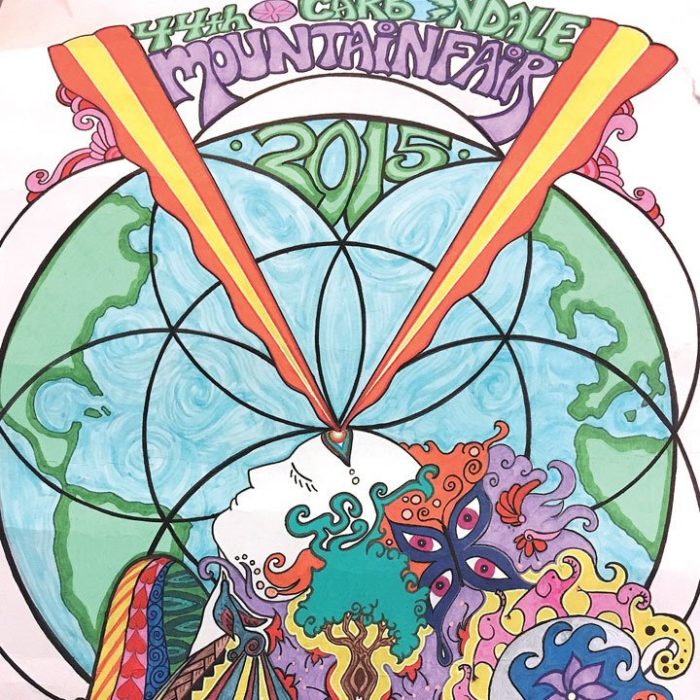 It felt kind of like going to a secret society meeting, except it wasn’t so secret. A group of about 20 people gathered at Carbondale Arts Executive Director Amy Kimberly’s charming house on a Tuesday evening, where there was a smorgasbord of snacks and libations waiting.

There was a small projector propped up on the coffee table in the middle of the living room, encircled by several chairs. This was where the voting would take place. Someone started handing out “ballots” — slips of paper with questions ranging from how much the voter loved the design to how well it would work on a T-shirt.

Laura Stover sat in the middle of the room, manning the projector. The commotion settled as the people did, claiming a chair or a stair — anywhere to get a good view of the contenders for this year’s Mountain Fair design.

I’m not sure it’s possible to live in Carbondale and not know Mountain Fair. The festival is older than me and attracts about 20,000 fair enthusiasts to our little town. And even if you’re not one of the hundreds of volunteers who work the weekend, chances are good that you know someone with a backstage pass.

What I’m not sure people really understand is all of the behind-the-scenes organizing that goes into it months in advance. I didn’t — not really.

Tuesday’s gathering was not the first planning session for the 47th Mountain Fair. By the time I was invited, there had already been agreement about the theme: “love pollinator.” There had already been calls put out to local artists for design submissions. There was a cohesion to the group — this wasn’t new to them.

It was to me. In my experience with branding events, it’s a matter of the organizing entity making internal decisions regarding the details and theme, then putting out a Request for Proposal to agencies and then — again internally — deciding on the winning bid. From there, it’s a straightforward process of exchanging change orders and updated designs until everyone has settled on something.

Mountain Fair, of course, is not a “normal” event. There are no RFPs, no agencies. Even as it approaches its 50th anniversary, Mountain Fair remains steadfastly, authentically grassroots.

There were 22 submissions, all unfinished concepts that were mostly handsketched. A few options definitely came from child artists, which made me smile. Apparently, asking for rough sketches instead of finished works was a first. Stover explained that the move was intentional: the winning artist would then work with Carbondale Arts to finetune an idea into a finished design.

Several artists heeded Carbondale Arts’ request for work samples to accompany their Mountain Fair submissions, which Stover also projected onto the screen for everyone’s consideration. They were all stunning.

I was thankful for the questions on the ballots — they helped guide my decisions. Otherwise, I’m pretty sure I would have voted everything as at least a four out of five. There were all sorts of plays on bees and honey and flowers, and Mt. Sopris unsurprisingly found her way into several sketches, too.

People bantered, defending their top choices. I found myself piping in, too. At the end of the evening, a clear winner emerged: Bonnie Barker. Her concepts encapsulate a sort of whimsical energy that reflects the spirit behind Mountain Fair perfectly, and I can’t wait to rock the finished work on a T-shirt.

After the final decision, people lingered and chatted a bit more before heading their separate ways. Jeff Britt was grinning ear-to-ear, relishing in planning one of his favorite events of the year.

“You know who puts on Mountain Fair?” he asked me rhetorically. “The people who show up.”