You can’t repress this press 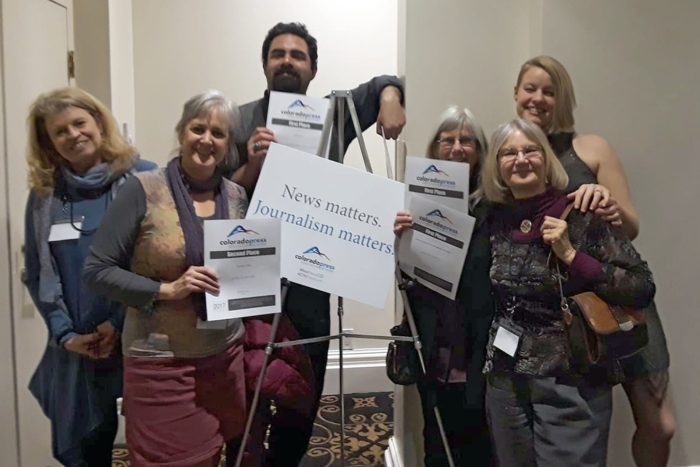 In our first trip to the Colorado Press Association convention last weekend, we were some of the loudest and most obnoxious cheerers as we nabbed three top spots in our size category. Photographer Jane Bachrach took home one first place for her overall photo portfolio and another for a photo essay on the Carbondale Wild West Rodeo. I shared credit with Footsteps Marketing for our swanky new website. And freelancer Mark Burrows has a second place award to show for capturing the moment at ladies’ arm wrestling.

I think these awards — and our experience at the conference in general — really says a lot about this organization.

First off, none of it would have been possible had the board not made a Colorado Press Association membership a priority. As a shoestring nonprofit, a big financial push is needed to do things that bigger outlets take for granted, but the community support was there. We’d never had a chance to even participate in this contest before, but I walked into this role knowing that we had a chance to show off what we do.

The Sun has been a photo-forward publication from its inception. Folks know it’s a new issue because of the big new photo winking at them from newsstands. Jane puts together photo pages more often than not, and more recently hatched the idea for the “parting shot” — a quirky or punny pic that wraps things up on the final inside page. I found no shortage of photographic material when I was submitting nominations for the awards, from a fish rescue to shirtless potato harvesting.

I was also struck by the quality that our crew of freelancers produced last year, from Justin Patrick’s iron mule story to Brian Colley’s eclipse cover. Burrows’ award just underlines how much of a community effort The Sun is. Submitted photos, guest opinions and the like bring a diversity that’s like icing on the cake our core staff serves up.

Then there’s the website. While I’m extremely proud of all our awards, this one is a bit of a personal triumph. Barbara Dills and I worked closely with Footsteps Marketing both times they upgraded our online presence, and they’ve been an invaluable partner. And while I have sort of reclaimed my old title of webmaster in updating the content every week, I have plenty of help from the folks at Footsteps and the rest of our staff. We’re committed to informing you on the platform of your choice — even if I still prefer a physical paper myself.

On that note, don’t think that just because we won a few awards we’re going to rest on our laurels. Quite the contrary, after two days of workshops and seminars, the staff and board have more ideas than we know what to do with. Don’t be surprised if you see some experimentation on everything from layout to writing style to events.

We also formed a closer connection with the Rio Blanco Herald Times, a family-owned paper out of Meeker. It’s great to catch up with journalists on our scale facing many of the same challenges.

But that also underscored how we are different. Everyone who learned about our nonprofit status was surprised and impressed. It reminded me how nice it is to have the community at your back rather than a corporation eyeballing its return on investment. In a world of distrust and disinformation, Carbondale has repeatedly proven it wants a newspaper.

So with new energy and new ideas to propel us forward, we’ll keep giving you that — and more.