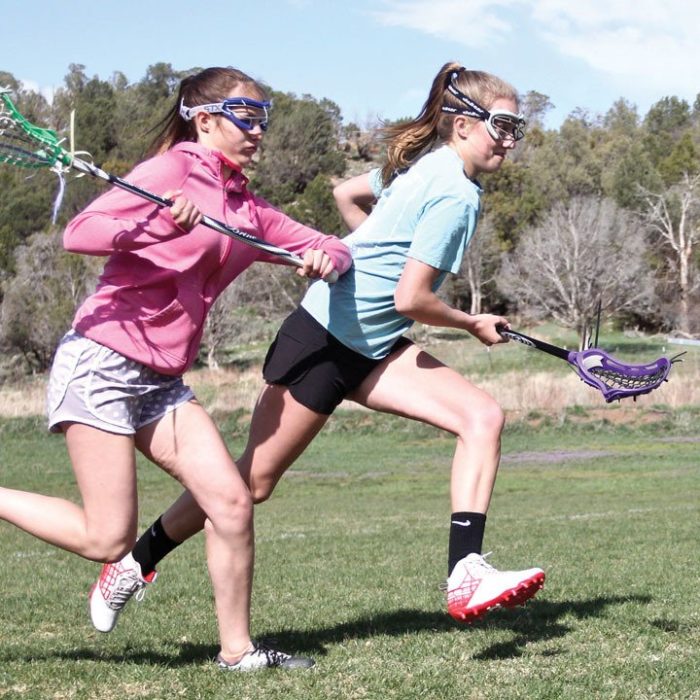 In other seasons, they may compete against each other. But when playing lacrosse, they’re all Roaring Fork Rams.

About half of the girls comprising the JV lacrosse team are full-time RFHS students. No single school has enough students to create its own dedicated team, so players congregate in Carbondale. That suits RFHS senior Megan Rusby just fine.

“One thing about team sports — specifically girls sports — is all of us are like best friends,” Rusby said. “Now I have great friends in Basalt and Glenwood. It’s just really great.”

This year, more than 25 girls showed up to play — more than double the number last year. That’s a big deal, because it means the team has the numbers to petition the Colorado High School Activities Association (CHSAA) to become a varsity program. Athletic Director Jade Bath  is in the process of doing just that.

“You want them to be able to play at the varsity level, but you have to jump through the hoops before you can get there,” she said. “We’re jumping through the final hoop, and hopefully moving forward, we’ll be a varsity program.”

For now, the girls lacrosse team is completely self funded — and funding has to be demonstrated to the district before the season begins, explained Chelsea Robson, former assistant coach.

“The kids and the parents find sponsors,” she said, adding that many parents also donate directly to the team. “We do stuff with the booster club, where the girls will go and volunteer with booster activities.”

It’s the reason Coach Jason Rusby doesn’t take a salary. “I don’t want to take money from a self-funded team,” he said, estimating that it takes at least $9,000 to fund a season.

It’s his first year coaching the girls at RFHS. Previously, he coached the boys team at Glenwood Springs High School, but in his daughter’s senior year, he decided to make the switch.

“We have no drama; they’re always having a good time,” he said of coaching a girls team. “The boys always seem to be mad about something. These guys are a blast.”

Megan, for her part, is used to her dad giving her pointers, and that certainly has its advantages.

“I seriously started playing on a team when I was 11 or 12, and he’s just kind of always been my behind-the-scenes coach,” she said. “It’s a little different having him as a full-time coach, but everything he tells the other girls, I’ve already heard. I love it.”

As for what he’s telling the girls, his coaching style has been about emphasizing the foundational skills required to excel in the sport, he said. “One of the things I worked on with the girls is the mechanics of shooting [and] running fast. It’s hard to teach the ethic of it, but I kind of compare it to running a race against your friend or your brother — there’s that little extra 100 percent,” he said. That’s often the difference that cinches a win, he continued. “Not the 80-percent running, but the 100 percent.”

It’s a strategy that’s working; the girls are 4-1 in their season, with the sole loss in double overtime to Battle Mountain.

When the girls win, they win big — often by double-digit score margins in a game with traditionally lower scoreboards, similar to soccer.

“We really just run over all these other teams, which is kind of a bummer. We need some more competition.” Becoming a varsity team will help with that, he added.

It’s not the team’s only obstacle. “The handicap is going to be finding coaches. I only signed up for this year. They posted the job here and had zero applicants.”

Robson isn’t in a position to take back over, but she still helps out with the team, and has confidence in its future.