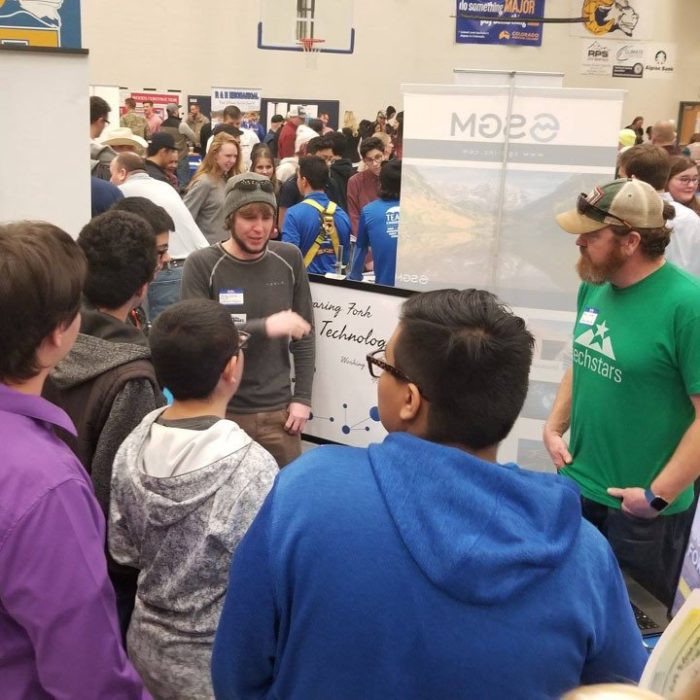 It was just going to be a Facebook page, Justin Lewis insisted about the Roaring Fork Technologists group he founded early last year.

Lewis, a software developer from Washington who migrated to Denver, had bought a house in Marble. And while he loved the lifestyle and serenity his new zip code offered, he also felt professionally isolated. Sure he wasn’t the only one, he created Roaring Fork Technologists.

“I just wanted to meet other technology folk of various flavors,” Lewis said. “But momentum grew, and we had this meeting at the beginning of the year. We came up with three goals: educat[ing] each other, supporting the youth and supporting local businesses.”

The group — now with 123 members — is already making headway in those arenas. There are monthly meetups that address the more technical questions between members, and then there is a quarterly speaker series that addresses broader applications for how technology can foster economic diversity and improve professional prospects for residents.

A lot of that comes down to innovation and entrepreneurship, he continued. One of his hopes for the group’s presence in the community is that a would-be business owner feels empowered to take the proverbial leap, knowing that he or she has access to an entire network of technology-savvy people willing to help overcome any startup hurdles.

“There’s this mentality where starting businesses is hard and scary,” he said. “We have mentors that have been massively successful in their careers coming in and saying, ‘We would love to mentor you guys.’ I think there is literally no reason to not try.”

GlenX opening its coworking space in the Third Street Center became a catalyst for the group’s momentum, as it provided an inclusive physical space for members to meet and, in turn, break down some of the silos that exist in the Valley, Lewis explained.

“You can’t have technology without the idea of using technology, without building business around the technology,” he said. “People in the community building this fabric of skill where we all know each other and support each other and refer each other and give each other ideas and help push them in directions that they didn’t think they might go, that’s what GlenX did.”

Inclusivity and collaboration are the philosophical cores behind Roaring Fork Technologists. Even on its website, the group outlines a clear code of conduct that emphasizes respect and handling disagreements well.

Lewis acknowledged the larger community isn’t perfect, but that’s the point of having such codes explicitly stated.

“The programming culture has a lot of sexism,” he said, noting that it’s been a topic raised at several conferences. “Luckily, the development community took a very firm stand on this.”

For Ashley Summers, one of the three presenting women coming from Denver for the next quarterly speaker event on April 27, inclusivity is among the greatest advantages of open data for a community at large — and is in fact a topic of the presentation.

“Having more data out in the public realm really helps close the gap between what people think is happening and what’s actually happening,” said Summers, the information systems manager for the Denver Regional Council of Governments. “We’ve had people working in this environment pushing to have that [data] out to the public domain so that the community is empowered with the facts: Is it equitable? Are we growing the way we want to grow? These are questions people end up answering anecdotally, and that’s usually not a great way to make decisions that affect everybody.”

Lewis is acutely conscious of the delicacy needed to broach the topic of intentional growth management for Carbondale and the Valley as a whole. It’s one of the reasons he’s planned Friday’s event in conjunction with a pizza-making session at the Carbondale Community Oven after the talk. Like Summers, Lewis believes that open data should be accessible to everyone, not just people with technical backgrounds.

‘Tech That Shapes Our Communities from the Women Who Build It’

Extra toppings: Pizza bake and conversation to follow at the Carbondale Community Oven