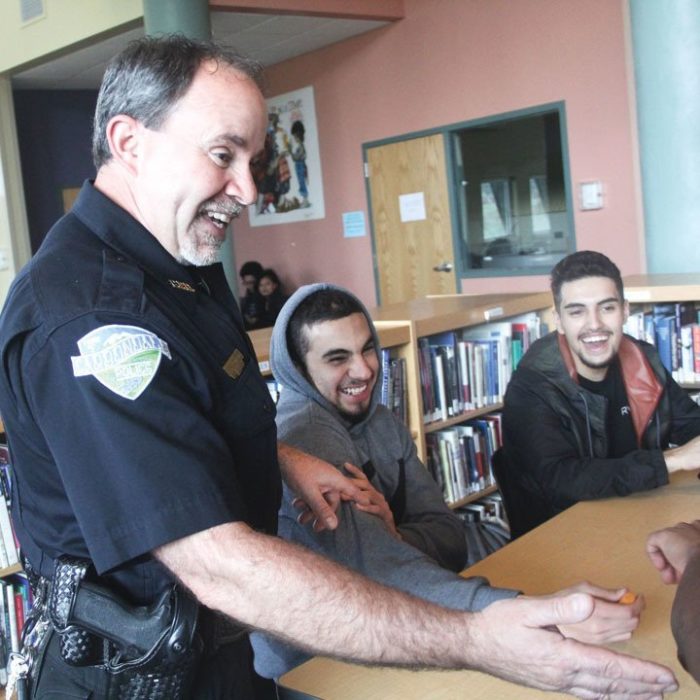 After five years as Carbondale’s school resource officer and almost 30 in law enforcement, he is actively training his replacement, Gretchen Bell, and will soon be looking for another career. News has leaked out slowly over the last school year, but he broke it to all of Roaring Fork High School in a heartbreakingly upbeat speech in March.

Zimmerman was born in northeast Indiana but was adopted and grew up in the northwest part of the state close to Lake Michigan. Even as a kid, he wanted to help people.

“If someone got themselves in a tight spot, I was the one to jump in and figure things out,” he said. “I wanted to be the guy between people and adversity.”

With an uncle in the sheriff’s department, he had an example of how to do that — but he didn’t take the direct path there. Instead, as a teen, he did rentals for a ski area up at a whopping 800 foot elevation, mixed flash powder for a fireworks company and did lawn care for a company where he met his future wife, Karen.

“We hit it off right away, but the timing wasn’t right,” he noted.

He was fresh out of high school and she was a senior, and it took them two years to start dating. By then, Zimmerman had ruled out psychology as a profession and was on the fence between serving as a Navy photographer’s mate — something of a long shot but the perfect blend of his passions — and getting into law enforcement. He got a job with the sheriff first.

“I was kind of apprehensive at first, but once I got into it I never looked back,” he said.

When the couple married and started thinking about having kids, Zimmerman began thinking about his birth family. He got in touch with his biological mother, and discovered that both she and her sister suffered from a progressive genetic visual degeneration called retinitis pigmentosa. His own vision test came out clean, however, so he chose not to worry about it.

In 2012, the lingering idea of moving out west became suddenly tangible on a family visit. Karen saw an ad for a radiation therapist at Valley View Hospital and decided to drop off a resumé, which led to an immediate interview and a job offer. So the family — the couple, their son and daughter and Karen’s mother — moved to Colorado, and Zimmerman went looking for a job while they were still living out of a motel. At first, he dismissed the idea of staying in law enforcement, but soon he was touring local departments.

“I’d never known Carbondale other than a name on the map,” he noted, but he stopped by and talked to the man at the front desk — who, unbeknownst to him, was Police Chief Gene Schilling. It turned out they were hiring, with interviews slated for that night, so Zimmerman turned in an application without much hope. He got a call before he even got back to Glenwood and, again, an almost immediate interview and job offer.

Although it was a smaller agency than he had left, Zimmerman felt immediately at home.

“It felt like I was sitting around in my old squad room just visiting,” he said. “Carbondale is as about the people and community policing as any department in the country. It’s not the police against society, it’s the police with society.”

His paperwork took just long enough to process for him to miss Mountain Fair, but by January 2013 he was settled in and ready for a new challenge as school resource officer. He brought that same community philosophy to the daunting task of connecting with kids in six buildings.

“Problems in the community translate to problems in the schools and vice versa,” he noted. After Columbine, police departments realized they need to have that connection — another set of trained eyes to help look after the young people.”

But Zimmerman sees the role of guard or deterrent as secondary to fostering relationships with the kids. It’s had its hiccups, but he tries to treat everyone equally and civilly and hopes that shines through.

“We’re not scary; we’re here to help — though we’re not the only answer,” he noted. “A lot of times they think that they don’t have control because they’re kids. I want them to know that they truly are empowered and they have a voice.”

He’s proud of the Carbondale United for School Safety group, which is planning a community event with just that theme (see sidebar).

“They really want to project the fact that we’re a full community and it’s everyone looking out for each other,” he said.

It’s things like that that make it the best position he’s ever held.

“The opportunity to see the kids as they grow, handle their struggles and become what they are is so incredible,” he said. “I’m going to dearly miss all of the students and staff.”

Zimmerman compares the slow progression of retinitis pigmentosa to having a thousand toothpicks and taking away a few at a time. It’s barely noticeable at first, then suddenly each step makes a huge difference.

It was his wife that first suspected something might be wrong, though in retrospect he can recognize the signs. A little less than a year ago, he agreed to undergo some tests and got the diagnosis and prognosis: no treatment; no cure. He has been off night shifts since then and has almost entirely given up driving.

“I’ve dedicated my life to keeping people safe, so I need to be completely transparent,” he said.

Someday soon, he’ll be legally blind — though it’s unclear when that will be or what form it will take.

“It’s a process of continual loss,” he observed. “I know by the end of the school year it’s just not going to be reasonable for me to be in the job. It’s on to the next adventure, whatever that may be.”

The family is committed to staying in the area — they live in Silt — until his daughter is out of high school. He’s optimistic about landing on his feet and is actively looking for gigs that put his gift of gab to work. Giving up just isn’t an option, particularly since the disease is hereditary.

“If I allow this to defeat me, what type of message does that send to my children?” he said.

Or, as he put it to the students at that meeting in March, “People do not fail, they just quit trying. Our success is only limited by the amount of our determination.”

What: A gathering to share a sense of security and appreciate those who make it possible

Who: Anyone who cares to attend — please wear blue in unity