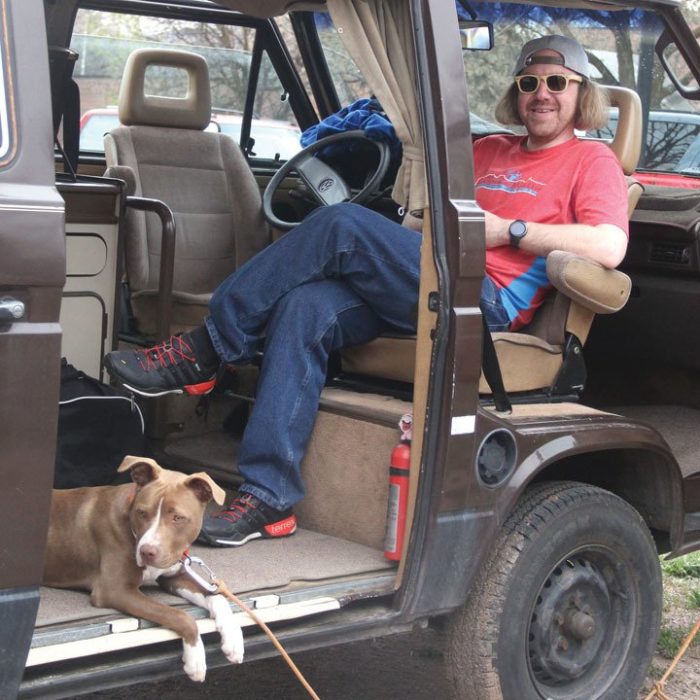 The idea of picking up and living out of the back of a camper or bus has likely occurred to most folks with an outdoor inclination, but some of the examples at 5Point’s annual Van Life Rally are more achievable than others.

On one end of the spectrum is the 1953 Tucker Sno-Cat Model 743 that caught plenty of attention at the April 19 event. With no stock parts, only “Sno-cat royalty” like Aaron Tucker could keep the thing running. Only eight were made — several of which were used for Edmund Hillary’s trans-antarctic expedition — and the other intact ones are all in museums. This one, though, will serve as a mobile tasting room for Tincup Mountain Whisky next winter.

By contrast, with only one unique part, Amanda Winter and Matt Swartz’s 1964 Clark Cortez is no sweat to keep running. The couple happened to be on their way from Moab to Denver in time to revisit the event that inspired them toward the nomadic lifestyle in the first place.

“It’s a wonderful thing,” Winter said. “It has made it possible for us to pursue our creative interests more.”

Their jobs — freelance copy editor and photographer — not only allowed them to go on the road, they benefited from it. Rather than opt for something on the cutting edge, the couple tracked down the classic camper.

“I wanted something that would make me smile,” Winter explained.

The dashboard gives away the forklift company origins, but custom woodwork has made the back is warm and welcoming. While it’s not always possible to get all the way to the trailhead in a large vehicle, that’s just an excuse for a bike ride. The lack of rent, meanwhile, means they can easily take time off to hike the John Muir Trail, or linger for weeks in a popular climbing area.

“It allows us to fully immerse ourselves and experience a place,” Swartz said.

You can follow their progress at instagram.com/van.project, but don’t expect it to last forever — they’re hoping their travels will eventually bring them to a permanent place to settle down.

They’re not alone in moving on. Ryan Gannaway is in the process of selling the ‘94 F-350 and camper she built with Jake Sakson ($13,000 or best offer — 361-7496). It was a project of necessity two years ago, when their lease was up and they still wanted to ski in Aspen.

“We realize we just couldn’t rent anymore,” she explained. “It was too expensive.”

She sold her car to afford the $4,000 truck, and they proceeded to put about that much again into constructing a wooden shell. If she’d had more time, it might have some more aesthetic touches, but at least it sports a stove, sleeping space, plenty of storage and the durability to hold up on the road.

“It’s like a moving earthquake,” Gannaway observed. “You have to build strong.”

Neither of them were particular experienced at construction, but the process was part of the point, as well.

“I wanted to learn and be sustainable,” she said. “I feel so connected to every piece of wood. You don’t get that with a Sprinter.”

And while a house is on the immediate horizon, she’s not ruling out another project.

“It’s paid itself back and more,” she said. “It’s the freedom to choose your own backyard.”