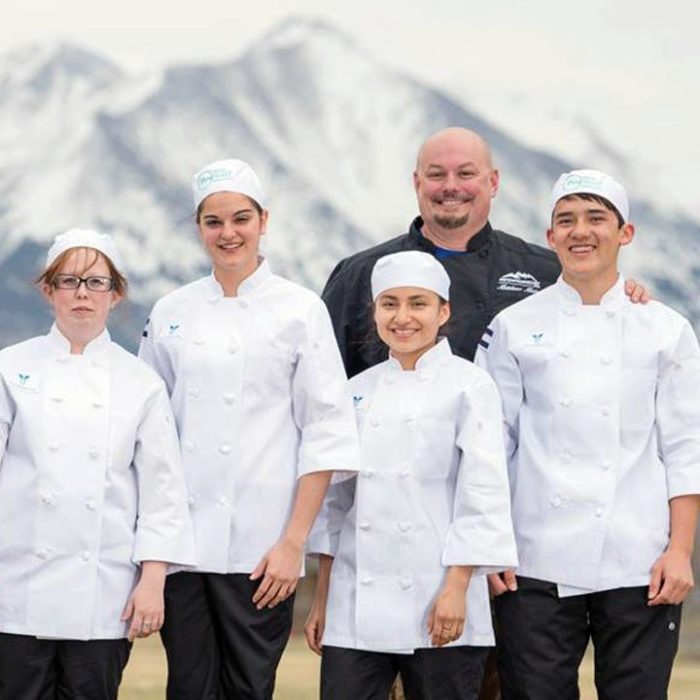 You have an hour to prepare and plate a three-course meal to a panel of judges — and yes, you’re rated for your courses’ aesthetics as well as flavor profiles. Oh, and you’re limited to working with two non-electric burners.

If that sounds like a lot of pressure, it’s because it is. But Youthentity’s four-person culinary wowed the judges at the Colorado ProStart Youth Invitational at Johnson & Wales University in Denver in March, successfully defending its first-place state title in culinary arts. The menu featured main attractions such as seared scallops with sweet corn, braised veal cheeks and blood-orange-glazed dark chocolate buche.

Now, they’re taking their show on the road to Rhode Island, where they’ll represent Colorado in the National Invitational, along with Kirsten Petre McDaniel, Youthentity founder and executive director, and Matt Maier, an Aspen-based private chef and Youthentity instructor.

“Taking high schoolers and working with them to better understand ingredients and techniques, to have them dedicate themselves to the process, to have them pour their very essences into striving towards the goal of perfection, and to see them rise from failure after failure to victory and ultimately to the national stage is truly one of the most rewarding things I know,” Maier said in a statement.

Getting to that national stage is no small feat. Of the almost 140,000 students that participate in the ProStart program across the country, a mere 400 represent their respective states at the National Invitational.

And there’s the actual trek across the country to get to the competition in Providence. “We have to be on the road at 5 a.m.,” Petre McDaniel said in an email.

While the weekend will be the first time most of the students have been to Rhode Island, it’s not the first time Youthentity has represented Colorado at the National Invitational — in fact, this year marks the fifth year the award-winning program has presented.

“If someone had told me years ago that Youthentity would have one of the leading restaurant management and culinary arts programs in the country for high school students, I would have said they were out of their mind,” Petre McDaniel said. “It wasn’t even on my radar.”

Youthentity is a nonprofit that operates out of Bridges High School, offering career readiness and financial literacy programs to students. The ProStart track actually has two arms: the culinary team and the restaurant management team, which placed second in March’s state competition for its “Ambrosia Greek Tavern” concept.

The skills and mindsets that get fostered along the way to winning those accolades is the real success of the program, Petre McDaniel emphasized.

“Most workplaces are highly cross-functional and the better you can function well as a team member, the more valuable you’ll be to an organization. Teamwork is a key component to succeeding in ProStart,” she said.

“Youthentity isn’t just about financial knowledge, pastry arts, culinary arts, or any of our programs, really,” he said. “Youthentity is about personal growth.  Students are exposed to essential skills for success such as working in a team dynamic, deadlines, pressure and how to learn and grow from mistakes. I tell my students all the time that what they’ve learned through ProStart is preparing them to be more successful anywhere.”

Regardless of what happens in Rhode Island, both Youthentity’s culinary and management teams have something big to celebrate: because of their victories at the Colorado invitational, each member earned scholarship opportunities — $50,000 for the culinary team members and $25,000 for the management team members — from Johnson & Wales University, Culinary Institute of Virginia, The Art Institutes, New England Culinary Institute and Nichols State University.