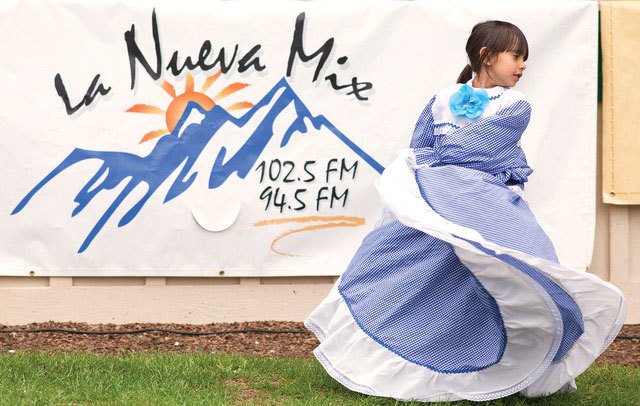 Chris Pooley is perfecting his margarita recipe. It will likely be the libation of choice at Festival las Americas, and he wants to make sure he doesn’t disappoint.

“I checked the weather report; we’re supposed to have good weather!” the immigration attorney said excitedly of Club Rotario’s biggest fundraiser, happening Friday, May 4 from 11 a.m. to 8 p.m. at Sopris Park.

Even though the festival celebrating all of the Americas — South, Central and North — is in its 16th year, this will only be the second time it’s held in May instead of August. That was largely Samuel Bernal’s idea.

“When you want to change something, you really have to get involved,” he said. “To get involved, you have to be part of the team.” So he became a Club Rotario member last year, attending weekly meetings and making gentle suggestions.

“Part of what they look for in their event is diversity,” Bernal continued. He thought that changing the date to align with both First Friday and Cinco de Mayo would help accomplish that goal.

Bernal, the radio host and vice president of award-winning La Tricolor, is in charge of entertainment at the festival — a role that plays to his strengths.

“He’s helped us out a lot in finding people to play,” organizer Jen Quevedo said of Bernal’s participation. “He’s not officially a club member anymore, but he’s so funny because he’s taken on maybe more than any of the rest of us in helping us get this organized.”

And as for this year’s four-band lineup? Bernal said it’s about supporting local groups.

“It doesn’t matter if you have a big name; people just want to have fun,” he said of the festival, adding that keeping the entertainment local helps keep the budget small.

Keeping costs low is an important aspect of planning the annual Sopris Park event. While Club Rotario relies heavily on sponsors, those funds don’t go toward operations — they go toward “becas,” or scholarships, for low-income Anglo and Latino students in the Valley. And this year’s festival has raised more scholarship money for Colorado Mountain College students — many of whom are first generation — than ever before.

“We talk to the counselors at the high schools and let them know what we’re doing,” Quevedo said about getting the word out. Additionally, instead of creating a completely separate application, the club utilizes existing processes to find deserving scholarship recipients.

Alpine Bank also offers its own scholarship and Lucy Moncada, a club member and Alpine Bank employee, screens those applicants as well. “Sometimes the students don’t have time to apply throughout the system,” she said, so she’s happy to be a conduit for those opportunities.

In addition to live music, margaritas and cross-cultural recreation in the park, the festival also is about community engagement. Part of that includes the Jackie Morales award ceremony, which recognizes community members in four categories: professional, teacher, volunteer and student, Quevedo explained. Morales was a founding festival organizer and club member.

This year, Club Rotario will present its first posthumous Jackie Morales award to Hanya Gottardo, who passed away in March. “She was very instrumental in this Valley and volunteered for a lot of different organizations,” Quevedo said. “She was a huge advocate for the Latino populations; she was from Bulgaria but studied in Argentina, so of course her Spanish was flawless. We’re giving her that award, and her husband and daughter said they are going to come to the festival and accept the award on her behalf.”

Not all sunshine and margaritas

This year, one little number made a big difference for Festival las Americas organizers: because Club Rotario is a 501(c)4 instead of a 501(c)3 nonprofit, Garfield County was unable to waive its special event vendor fees. Garfield County only offers yearlong permits, so even if vendors were only interested in participating in one event for one day, they would still have to pay the $255 fee. The end result? Festival las Americas has only one committed food vendor as of press time.