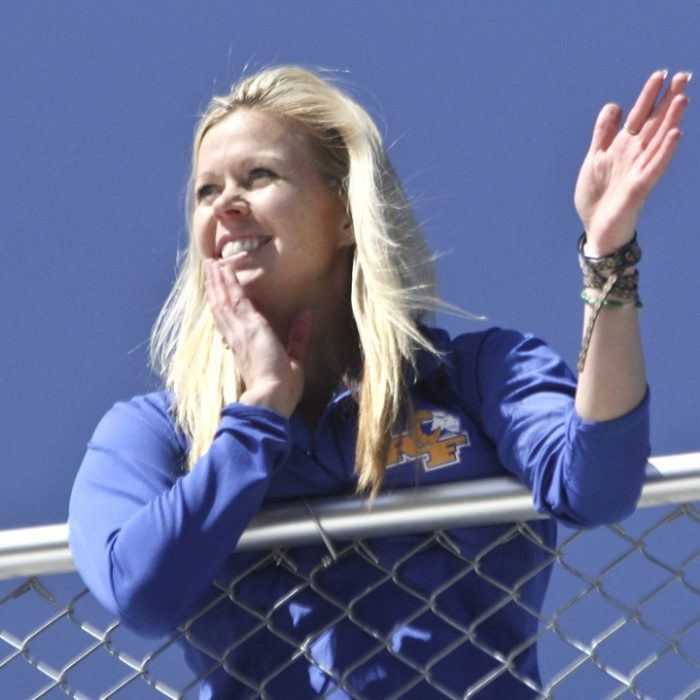 There’s nothing Kelsie Goodman values more than community, but sometimes that can lead to difficult decisions. Case in point, moving to Basalt for a temporary teaching position six years ago, and leaving her position as vice principal at Roaring Fork High School to move back home.

“I think it’s always been the right choice and it’s always been hard,” she said. “If I didn’t have family I was returning to, I could stay in Carbondale forever. I feel like all parts of me are alive in a way I’ve never experienced.”

Still, those parts have their roots in the small-town soil of Colfax, Iowa.

“People show up to games and the school is kinda the heartbeat of the town, which I love,” Goodman said. “Both of my grandmothers taught in one-room schoolhouses and books were 90 percent of the presents we got, so education was definitely it.”

Although folks who know her now may find it hard to believe, Goodman characterized herself as a rather melancholy child until she made a conscious decision to look on the bright side.

“I think I had this realization that you are your choices, so it’s putting on your proverbial golden high heels and doing the best with what you’re given,” she said.

She developed a taste for travel at an early age despite her parents’ disinclination. She was particularly taken with Spanish speaking countries, thanks in part to an influential teacher, and traveled and studied abroad at every opportunity.

Although she pursued a masters in education from Truman State University in Missouri, she wasn’t truly hooked until she started student teaching Spanish at a small school nearby. When a formal position opened up, she took it.

“There weren’t very many native Spanish speakers, so it was a very different role,” Goodman noted.

As such, when a temporary teacher was needed in Basalt, she jumped at the chance.

“Who doesn’t want to be in Colorado?” she queried.

Her year with the Rams’ midvalley rivals is something Goodman has yet to live down — “Kids still bring it up everytime I wear purple,” she laughed — but it was Roaring Fork that really brought things to the next level.

“The people who had a big impact on me as a kid were the teachers,” Goodman noted. “After working with three sets of administrators, I began to see the difference they make, especially at small schools.”

So when Barbara Mason announced she would be stepping down as vice principal at the end of the 2013-14 school year, Goodman decided to go for the job. She got the gig, and suddenly found herself expected to lead meetings she’d never even attended as a Spanish teacher. Luckily, she had plenty of mentorship and a special program through the University of Denver to answer a lot of questions before the start of the school year.

Students soon picked up on her enthusiasm and dedication, and her Spanish proved invaluable in the new role.

“Our different communities communicate differently, and as a bilingual thinker I get to be in both worlds,” she noted. “How we raise and educate our kids is the most important thing… It’s hard enough to come to school every day. I want to make it as engaging as possible.”

Over the past four years, the school has excelled academically — boasting increased enrollment, attendance and test scores — which Goodman characterizes as a team effort.

“You can’t grow in isolation. Roaring Fork has been wildly successful, and none if it is attributable to one person,” she noted. “I think I get a lot of credit for things our teachers are doing every day. Everyone cares about the same things I do.”

Even so, she became something of a symbol to parents and the community at large when she was passed over for the principal in 2017 despite significant public support. It was a difficult position for a positive person.

“We were having this wonderful year and people just wanted to talk about one thing,” she said.

The students, however, took an inclusive approach with a waffle-in instead of a walk-out — inspired in part by comparisons between Goodman and Leslie Knope of “Parks and Recreation.”

“It represented the best of who we are,” she said. “It unified us and helped us take a step forward.”

Her resignation a year later has reopened that discussion, and Goodman is keen to put the rumors to rest.

“It would have been a different situation, but I’m not leaving because I didn’t get it,” she said. “I went into it wanting the position, but I don’t have hard feelings about it at all.”

Since almost the day she moved West, Goodman has been receiving Uhaul coupons from her father in the mail. Her two siblings have moved back home, her airline miles are used for flights to Des Moines instead of globe-hopping and Facetiming into family dinners isn’t cutting it anymore.

“The homing device has been going off stronger and stronger,” she explained. “We are complete products of the people with whom we live, and I think I’ve always known that I wanted to live closer to the community of my family.”

She’s confident the school will do just fine without her, thanks to the efforts of others and the systems she helped shape. She has particular pride in Roaring Fork’s trauma resources and the popularity and quality of the all-school meetings.

“I’m focusing on leaving a worthy legacy,” she said. “That’s what outlasts you.”

“The culture we’ve built is a huge testament to her, and she’s set it up in such a way that it can continue,” he said.

“She encourages and supports everyone. She brings a good vibe to the school that makes you want to do better,” he said. “We’re going to miss her.”

Goodman is excited about her next job, an administrative position at a 6/7 middle school, and is eagerly awaiting the announcement of her replacement at Roaring Fork — which could come as soon as next week. In fact, she has a laundry list of events she’s looking forward to in the next month, from the art show to awards night to graduation. She’s honored to be serving as commencement speaker for Precollegiate.

And while she has no concrete plans about when she’s actually moving, she’s already made plans to return for Graduation 2019 — if not before.