Local apothecary highlights the people behind the products 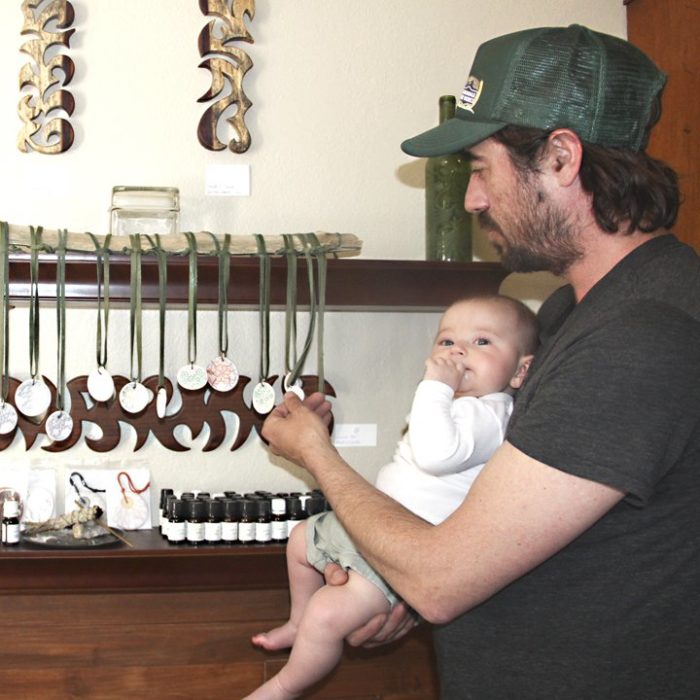 When walking into Wyatt’s Apothecary at 259 Main St., it’s easy not to notice the miniature bench at the entrance, a subtle nod to the store’s barely-six-months-old namesake.

Jeremy “Jambo” Morris is completely enamored with fatherhood, and he’s also relishing being a new shop owner. Like his son for whom he named it, the apothecary is still in early development.

“We’re listening to the community, to what they want,” Morris said. “It’s a super fun concept to start out with, and the feedback we’re getting is even better. The direction I’m taking it — it’s more than I thought it was going to be. There’s more support than I could picture.”

The space simultaneously feels like an established, almost old-world shop — with tinctures, salves and essential oils lining most of its walls — and still very much a work in progress: the back corner features newly built, still-empty shelves. A peek into the back room reveals bags of unsorted inventory.

“What we’re trying to do is grow as a community. I want this center table to be for small-batch consignments, if you will,” he said, explaining his hopes that the shop can evolve into a gathering space for “medicine men and women” in the area. “I want to connect the dots for the community. We want to work with this community, rather than being a retailer.”

Morris is happy to answer questions about the products he brings into the apothecary, many of which contain cannabidiol (CBD), a chemical compound found in cannabis without psychoactive components.

“I think a lot of people want to understand the medicine more,” he said, adding that some of his customers have expressed frustrations that information about CBD products isn’t more readily accessible — largely because of the federal government’s conflicting stances on the matter.

“The government even patented it,” he said of United States Patent 6630507, which labels cannabinoids as antioxidants and neuroprotectants. “If this stuff doesn’t get you high, and you can literally buy stuff that gets you high right down the street at the dispensary, why are we so concerned about the stuff that helps you?” he posed.

That said, Morris wants to educate, not mislead.

“It’s not like we’re trying to sell hemp as the cure-all; it’s more about having a multitude of products that have been used in traditional medicine and adding a lot of daily healthy-living practice,” he said. “Then you’re the cure, not the stuff you’re taking. You’re your own billion-dollar regenerating machine. You have to have a little bit of faith in yourself, then add education, then add personal choice.”

Morris encourages people to have a conversation with an herbalist or doctor about their health goals, then talk to him about what they’re looking for in terms of product. He prides himself in not just knowing the products but knowing from where and whom they came. It’s a cornerstone philosophy at the apothecary.

“The field has evolved — it’s much more established,” Morris said. “If you follow the right path, there’s more trust in it. There’s more testing; there’s more research being done. Everything that a consumer that’s looking for safety wants is there.”

It’s not unlike the food industry, he continued.

“That farm-to-table concept, the same thing’s going on with medicine, with hemp, [and it] should be going on with cannabis,” he said. “It’s a conscious movement that can be applied to so many different aspects of our culture and our day-to-day living.”

“Cannabinoids have been found to have antioxidant properties, unrelated to NMDA receptor antagonism. This new found property makes cannabinoids useful in the treatment and prophylaxis of wide variety of oxidation associated diseases, such as ischemic, age-related, inflammatory and autoimmune diseases. The cannabinoids are found to have particular application as neuroprotectants, for example in limiting neurological damage following ischemic insults, such as stroke and trauma, or in the treatment of neurodegenerative diseases, such as Alzheimer’s disease, Parkinson’s disease and HIV dementia. Nonpsychoactive cannabinoids, such as cannabidoil, are particularly advantageous to use because they avoid toxicity that is encountered with psychoactive cannabinoids at high doses useful in the method of the present invention.” Read the full patent language here.