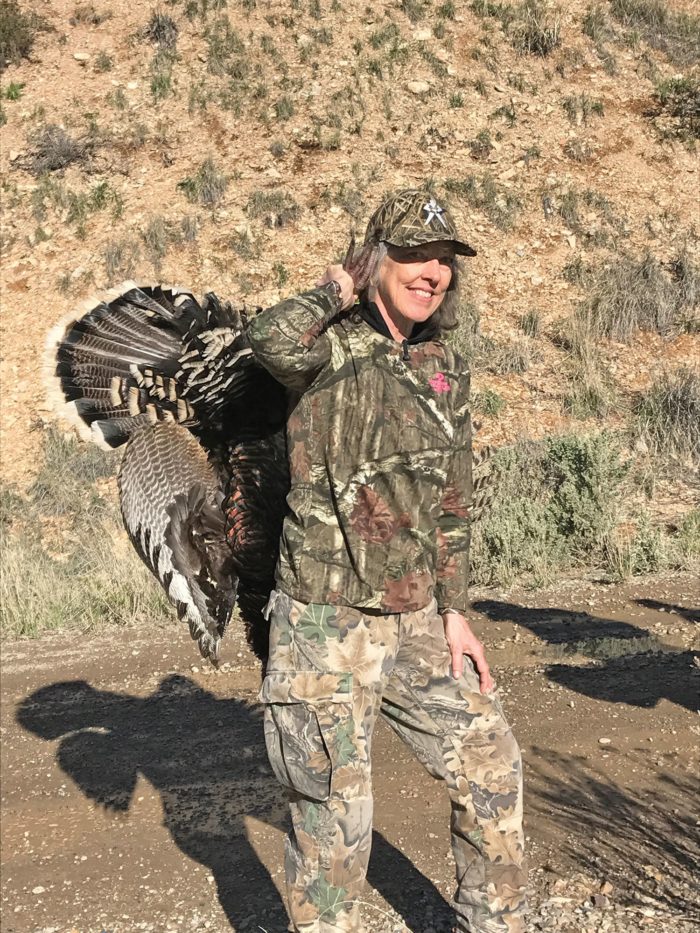 The sharp flinty cluck-cluck of a hen turkey rang out in the cool morning air, and was mimicked perfectly by my guide Dick Severin, sitting beside me in our hunting blind. I held my 20 gauge shotgun, loaded and cocked, the barrel resting on a tripod and just the tip sticking out of the window slot. It was my grandfather’s gun which, until now, had never been used for hunting. He’d bought it for home protection, figuring the sound of the pump action would scare off potential intruders.

Dick had placed two decoys, a tom and a hen, just twenty yards from our blind.

“Don’t shoot the decoy, don’t shoot the decoy,” I repeated to myself, afraid of making a rookie mistake on my first hunt. We waited motionless, watching the flock of thirty or so turkeys slowly make their way across the field about forty yards in front of us, out of firing range.

The toms gobbled and fanned their tails, dancing left and right in front of the hens, who clucked and purred, but seemed more interested in the bugs at their feet than the would-be suitors. Dick moved the plastic turkey caller around in his mouth, trying to match the tone and frequency of the hens. And sure enough he caught the interest of a few, who started moving toward our decoys, followed closely by several toms.

“Take your safety off,” whispered Dick. The flock was now in range and all I needed was for one of the toms to wander away on its own. I clicked the gun’s safety button off.

“That one,” Dick pointed, “get ready.” I took aim at the tom’s head and pulled the trigger. The turkey fell and jerked a little. The rest of the flock walked away unfazed.

This was my first time taking an animal’s life. I knelt over the magnificent bird, placed my hand on its glossy black feathers and, in the tradition of our primitive ancestors, thanked it for its sacrifice.I’d achieved my goal of learning how to procure meat in a way that has endured through human history, until about a century ago.

I was not alone in my quest. Four women were chosen for this Women Afield class held annually by Colorado Parks and Wildlife to teach hunting techniques to those who have no experienced family or friends to mentor them. The event is free, all that’s required is a Hunter Education certificate and a Spring Turkey License, which costs $21 for Colorado residents, plus a $10 Habitat Stamp that helps support our state wildlife areas.

The hunt was held on land owned by Caerus Oil and Gas which sponsored the two-day event on April 21-22. On Saturday we met at the Caerus office in Parachute for a two hour presentation on hunting laws, practices and safety, given by CPW Hunter Outreach Coordinator Kathleen Tadvick. After a catered lunch the four of us women, ages 32-61, and our personal guides, all CPW employees or volunteers, headed out to the field for some target practice. Those without a gun of their own were provided loaners.

Next came scouting. The CPW/Caerus crew had already located the flock in a field dotted with gaswells and associated equipment. We traveled in a caravan of pickups on dirt roads north of Parachute, arriving at the field just as the sun was setting and the turkeys were returning to their roost in a few old cottonwood trees. Four hunting blinds had been placed around the area, ready for our arrival early Sunday morning. Turkeys may be lawfully hunted one half hour before sunrise to sunset, and only bearded turkeys (meaning males) may be hunted in the spring.

After another catered meal at Caerus’ office, we retired to our beds at the Grand Vista hotel, some returning to their nearby homes for the night. I reflected on all I’d learned about the intricacies of turkey-hunting, and hoped I’d make my teachers proud. It turned out I had nothing to worry about. I was well prepared and expertly guided throughout the whole experience.

After the four of us had all harvested our birds, we assembled at the nearby hunting camp where we were instructed how to process the carcass. This is where the real hard work of hunting comes in, but it was worth it. I’ve now got 15 pounds of delicious wild turkey meat in my freezer.

If you’re interested in becoming a hunter visit cpw.state.co.us/learn/Pages/HunterOutreach.aspx