Drama returns to RFHS with whodunit 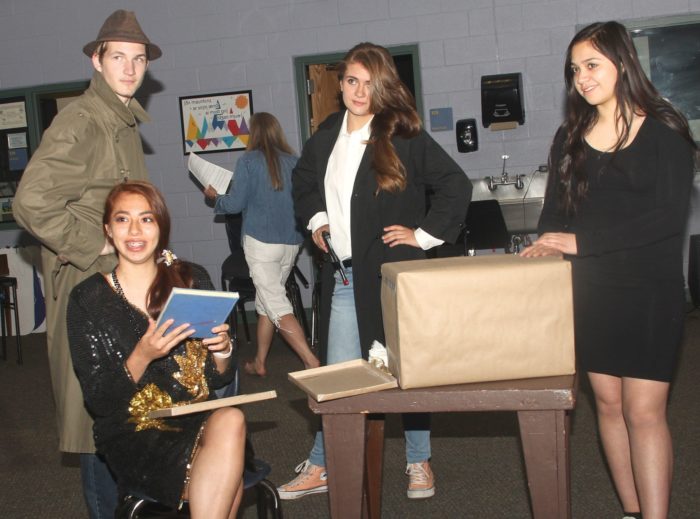 It took weeks to clean out the set shop. Then the props didn’t arrive on time. But the show will go on, and it will be epic — after all, it’s the first production from the first Roaring Fork High School official drama program in years.

Because there hadn’t been a drama program in so long, the once-dedicated set and costume room had over the years evolved into a sort-of catchall storage room, Marcia Kuhlman, RFHS choir and drama teacher, explained.

“Everybody used it as a storage location, so our set shop has janitorial stuff, it has art show stuff, it has a box full of yoga mats in it. It has I’m pretty sure some asbestos,” Kuhlman said half jokingly. “We had people almost impale themselves with nails and glass and stinky dresses that no one should ever wear again.”

And there were the bugs, Freshman Jessie Diehl chimed in.

“We had to throw away all but two wigs due to bugs and stuff,” she said.

But that kind of dedication sets the literal stage for the program’s future, which is looking bright: the student performers are still rehearsing their first production, and yet enrollment for the fall has already doubled, Kuhlman shared enthusiastically.

“I suspect [that number] will probably continue to increase,” she said.

That means there’s a lot riding on this show, a murder-mystery comedy set in the 1920s titled “Queen of the Silent Scream.” It’s the program’s debut to the school and the community, and it’s also its first fundraiser to ensure continued success.

“Because we’ve never had a drama department and we have zero dollars in our income, hopefully this will be a big source of funding for the school and also for now and what’s coming in the future,” Kuhlman said. And she has more than emotion and time invested in the program: she personally bought the show’s props.

It’s well worth it for Kuhlman, because having a drama program at the high school again allows students with a performing arts passion an outlet and students who were interested in getting on stage an opportunity. Most of the “Queen of the Silent Scream” cast fall into the latter category.

“It’s really fun, but it’s also really stressful. A lot of us haven’t done a show or have ever been told what to do exactly,” Junior Liz Jimenez said of the experience.

Freshman Lorena Bernal agreed. “You have to know your lines, but also, like, move this way, look towards the audience, you can’t have your back to the audience and stuff. You’ve got to cheat out,” she said.

“And do you remember the word for that?” Kuhlman offered helpfully.

She did: blocking. Students have to memorize their lines from the script, remember their blocking and develop their characters enough to be able to improvise during the dinner portion of the evening.

That’s a tall order for first-time performers, but Kuhlman has utter confidence in her students.

“What you guys are doing is setting the foundation for everyone who comes after you, and that’s a really, really important job,” she told the group before getting rehearsal started.

Queen of the Silent Scream