Ogilbys turning out to be a family of fish 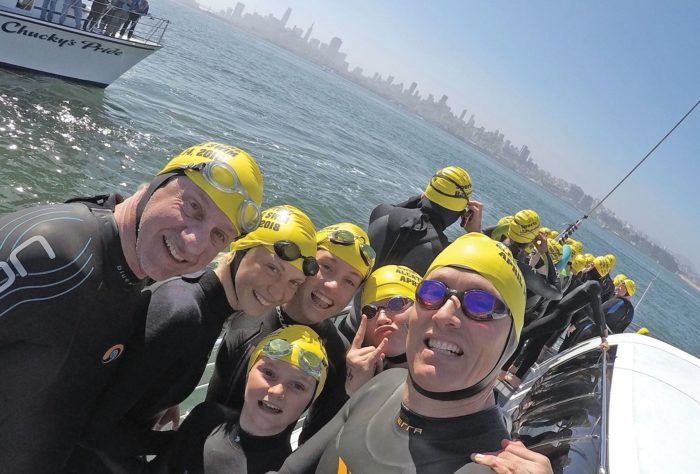 It’s hard to say where the swimming legacy in the Ogilby family begins and ends. On one hand, it traces back at least as far as 1933 Illinois state freestyle champion Trahern Ogilby. On the other, it’s his great-granddaughters — Amélie, 12, and Laia, 9 — who have inspired the intervening generations — Chuck, 75, and Kayo, 45 — to get back into competition.

“There’s a thread there that is really special,” said Kayo. “I have treasured getting to take that journey with them.”

Chuck and Kayo recently returned from the National Championship, where the former took first in his age group for three events (the 50 back by nearly 3 seconds, the 100 by almost 12, and the 200 back by more than 15) and third in another, with the latter finishing fifth in the 1650 freestyle.

The visit to Indianapolis was also a chance for Chuck to reflect on his college years under coach and “father of interval training” James Counsilman. Some of his old teammates are in the hall of fame there, and Chuck was no slouch himself.

Kayo remembers following his father around to meets as a kid and even got time out of school to attend the very first World Masters competition in New Zealand.

At 41, however, Chuck decided to call it quits.

“I went back into the pool and I just couldn’t do it,” he said. “I didn’t so much as put my toe into the water until three years ago.”

Meanwhile, the family moved to Vail before buying Hell Roaring Ranch in 1978 and ran it as a bed and breakfast for years before branching into Avalanche Ranch next door. Kayo grew up ski racing and playing soccer, and although he joined the swim team for one year in college, he set it aside until about 10 years ago.

That’s when, as a teacher and ski coach at Colorado Rocky Mountain School, he decided he needed some background fitness.

“I hit that age when I was struggling to keep up with teenagers,” he explained “Swimming keeps you younger in body and heart.”

It might never have gone beyond that had the family not taken Amélie to a swim meet in 2013. She was hooked immediately.

“I really like the competition and the adrenaline,” she said.

Pretty soon, Laia wanted in on the action.

“I watched my sister for a long time and I wanted to do it,” she said. “Usually I’m swimming against people who are five years older, but I get faster each day.”

She’s not quite ready to give up on horseback riding the way her big sister recently dropped ballet to train, however.

Amélie’s new full-time routine helped her leapfrog right over the second-tier silver finals and make the cut to compete in state this year.

“It was really fun to see the way setting goals transformed her,” Kayo said.

Another game changer was swimming in open water. Amélie recently swam the Golden Gate Bridge and the whole family participated in the swim from Alcatraz to the mainland. Kayo himself has completed a gruelling route around Key West.

“It changes your perception of what’s possible,” he said. “We feel like we’re seeing it percolate through other parts of their lives.”

Pretty soon, he couldn’t resist the opportunity to join some of the open competitions — even if it meant joining a relay team with a 6, 11 and 13 year old.

“Suddenly, I found myself instead of standing around and waiting being part of things,” he said.

With that example, Chuck couldn’t help but buy a pair of goggles himself.

The Ogilbys are all part of Team Sopris, a robust nonprofit run by parents and coaches which holds four morning practices each week at the Glenwood Community Center, and is recruiting adults who want to swim better. Contact Coach Heggy (theggy@teamsopris.org) for more information.

“We’ve found ourselves part of a really neat team,” Kayo said. “It’s a long standing program that includes all the facets — club, high school and masters.”

The kids’ bus driver at Waldorf is even involved, so they have a direct ride to the Glenwood Rec. Center after school.

The family — and there’s a cousin or two in the mix, as well — contributes a particular talent for distance events, but it’s not just about one person.

“Everyone comes together to cheer on and support each other,” Kayo said.

The camaraderie helps them all get out of bed before dawn to practice.

And while big wins like Chuck’s are exhilarating and exhausting, it’s the day-to-day goals of beating your personal record or maintaining against age or a new class. Amélie turns 13 in November and will enter a new bracket. First, she’s planning to  attend a summer camp in Grand Junction and hopes to compete in the state meet for long course.

“Swimming has progressed so much,” Chuck noted. “I didn’t train like the girls do until I was in college.”

In fact, Amélie and Kayo are doing a lot of the same intervals, and in the past few weeks she has begun to outpace him.

“I thought maybe I would have until she was in high school,” Kayo noted. “It’s an interesting milemarker as a parent, but I couldn’t be more thrilled. These kids are fish.”