Pages of the Past: Carbondale’s got talent 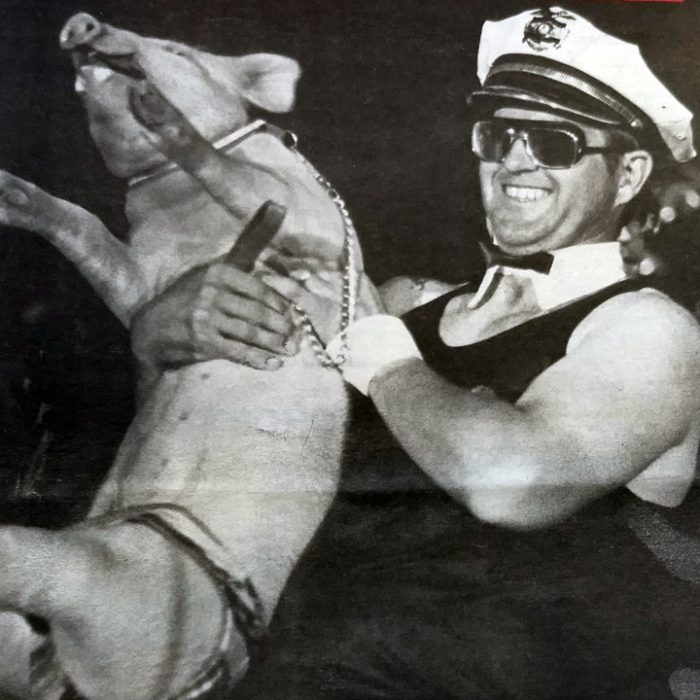 Then-Police Chief Fred Williams went all in on the "pig" association in the 1988 talent show.

Carbondale Police Chief Verne Soucie announced his intention to run for Garfield County Sheriff. With 20 years in law enforcement in Carbondale, Arvada and Jefferson County, Soucie seemed confident in his chances of nabbing the Republican nomination despite five other names in the ring. “I began receiving a lot of encouragement and inquiries throughout the county,” he noted. “I feel as if I have something to offer.” (Spoiler alert: he won.)

In other news… Striking miners and Mid-Continent Coal and Coak reached a contract agreement.

The Carbondale Talent Show lived up to its outrageous reputation — though in different ways on each night. On Friday, Trustee John Foulkrod pulled a knife and stabbed an inflatable shark in the midst of a show “plagued with miscues, technical problems, overextended acts and, yes, the crowd was a little brain dead.” Either way, the acts were largely solid. Jim Tippet belted “They Call Me the Breeze,” the Carbondale cops did the “Pigskin Preview” and Teatro Dos Ventos did a spoof on Marty Robins’ “El Paso” based on the conflict around Penny Hot Springs. Oh, and it all took place at the CRMS barn on a set modeled after Ford Theatre — complete with the Lincolns and Booth. One entertainer’s advice for future acts: “Keep them simple and outrageous.”

In other news… Police Chief Fred Williams and other local law enforcement officers were preparing for a 275 mile Special Olympics torch run from Utah to Denver.

Roaring Fork High School senior Dana Boyle came in first in three events and broke two state records at the class 3A state track meet. The path to the podium included some hard choices, with soccer and track jockeying for her talents and a series of coincidences like college entry exams and the cross country final falling on the same day. Her biggest fan was her little sister, Samantha, who Dana said she’d hope to see breaking her records someday.

In other news… A 6×8 foot stained glass mural of school supplies by Shannon Muse, students and faculty was unveiled at Carbondale Middle School (and has since been moved to the new location).

Roaring Fork Rampage Editor Will Grandbois penned a column calling it turning point for the school. With a new principal and a nearly-new building, he bemoaned the loss of enrollment to other area schools.“Roaring Fork High School is being abandoned. The fault lies not with any individual who left… but with the overall assumption that RFHS is in some way less. It’s not, but if we give up on its potential, it may become that way.” (Enrollment is, incidentally, well up since then.)

In other news… Carbondalian Barry Maggert was remembered as an all-around good guy after his death in a small plane crash near Black Hawk.