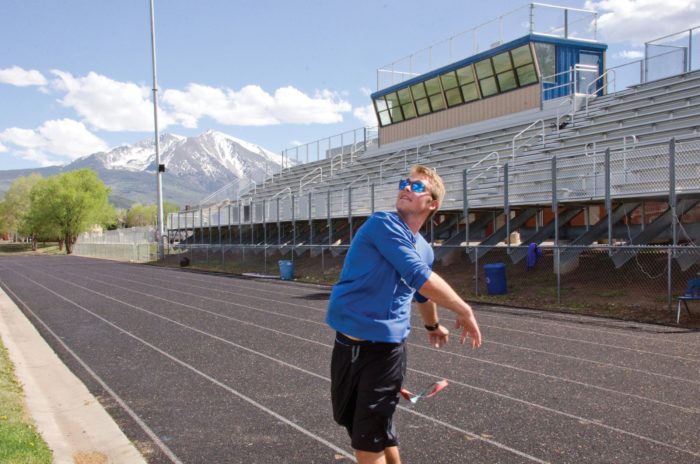 At Roaring Fork High School, geometry and physics are as much a part of track and field as the physical act of running. Coach Ryan Erickson makes sure of it.

“I just love the technical aspect of the sport,” he said, crouching over his measurement adjacent to the high jump setup during one of the last practices before three of his top athletes head to Denver for the State competition. “If you don’t think you’re going to use geometry in real life, run track.”

His athletes take it to heart. Jasper Germain, a senior who will be competing at State in the high jump, long jump, triple jump and 110-meter hurdles, uses Erickson’s lines to measure his exact mark.

“It makes sure there’s a 90-degree angle in that corner so everything’s straight, so to speak,” he said. Days before his final competition in a sport he’s excelled at since elementary school, Germain was fine-tuning the mechanics for his high jump.

“I kind of looked back over some film and realized what was wrong, what I haven’t been doing,” he said. “My last few steps before I jump, they’re supposed to be quick, and I was getting too much speed in my approach. I slowed down my approach, and it’s getting me over my heights, so I’m happy for that.”

In order to qualify for State, athletes must rank in the top 18 times or distances for the season. Germain’s 6-foot-7 high jump earned him the No. 1 spot for that event in a three-way tie. Having competed at the state level before and come out with a lower ranking than what he had going in, he’s laser-focused on making his last one cause for celebration.

“This will be the last of it. It’s kind of bittersweet. I’m kind of happy— I mean I’m happy I’m graduating and that I’m finally done with high school — but at the same time, I do love track. So it’ll be tough, but hopefully I make it a good one to go out on,” he said.

Despite being approached by several schools to continue at the collegiate level, he said it’s time to close his track chapter. He’ll be attending Fort Lewis College in Durango next fall.

“I plan on going there for two years and then transferring to a bigger school to study wildlife biology,” Germain said.

He’s not the only one on the team interested in a career in the sciences. One of his teammates also competing in Denver, Spencer Ochko, will be heading to Nova Southeastern University in Florida after graduating, where he’ll pursue a career in sports medicine.

“I’m already accepted to their osteopathic medicine school, so I’m going to be a doctor, I guess,” he said with a grin.

But unlike for the others, this will be Ochko’s first time competing at State. The discus thrower has been involved in the sport since the seventh grade, he noted. “I am super excited, actually. For me, it’s about time that I finally made it to the big leagues.”

His performance in Denver will determine whether or not he continues throwing after high school, he’s decided. “I might try to walk on down there, because they have a track team,” he said of Nova Southeastern. “I’m just thinking, depending on how far I throw this weekend, I might be like, ‘Hey I could probably throw at a higher level.’”

Justin Thompson, who Ochko credits with getting him involved in the sport, will be officially done with his track career after the Denver competition — he was recruited by Metro State University in Denver to play basketball.

“I’m just going to miss the meets every weekend,” he said. “They’re fun. You hang out with your friends; you compete. And you can just do it against yourself.”

Like Germain, Thompson has run track since elementary school — and also holds a first-place rank at the moment for his 22-and-a-half-foot long jump. He, too, competes in the high jump, long jump, triple jump and 110-meter hurdles.

The team leaves Thursday, May 17. It’ll be Erickson’s ninth time taking his athletes to the competition, and it likely won’t be his last.

“It’s fun to work with athletes of all shapes and sizes and trying to see how much you can get out of them,” he said.